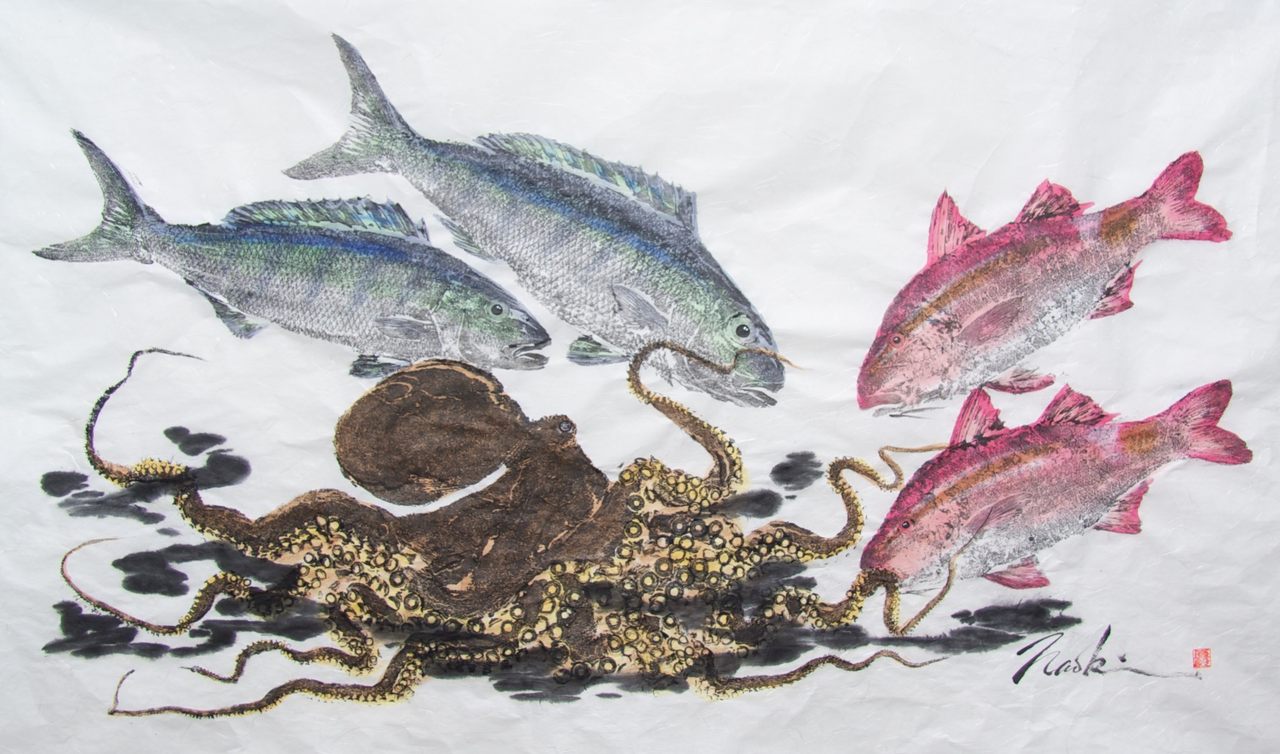 Naoki Hayashi’s first encounter with gyotaku—the traditional Japanese art of fish printing—was anything but traditional. It was the early 1970s, and a few local families had taken their four-wheel drive vehicles out to some Oʻahu beaches to camp out and catch some fish. As an elementary-school kid, Hayashi’s job was to scale and gut the fish so there would be no mess at home. The adults were nearing the end of a successful day of fishing, meaning they were deep into a bucket of beer, sake, and soju. As Hayashi dug around inside a Hawaiian soldierfish for its red-frilled guts, an older family friend grabbed the fish from him, dipped it into rusty bucket full of red paint (a hand-me-down from the Korean War) and slapped the fish against Hayashi’s bare chest. “This is gyotaku,” the older man said, pointing to the distinct red imprint.

The son of immigrants who came from a small Japanese fishing village, Hayashi made his first fish print at 11 and, aside from a brief stint studying biochemistry in college, never stopped. Hayashi has since developed a full-time career as a gyotaku artist. First used as a handy way to document the size and shape of a fish, gyotaku has since evolved into a genre of scientific illustration, an educational tool, and a modern art form. According to Hayashi, there are three key steps in traditional gyotaku: catch it, print it, and eat it. But the history of the form is a little more 0bscure.

People have been making prints of things they find in nature for around 20,000 years, but the specific form of gyotaku probably emerged in mid-19th-century Japan, according to Rachel Ramirez, a printmaker who wrote her doctoral thesis on gyotaku at the University of Porto in Portugal. The procedure is quite similar to Chinese stone rubbing, an ancient method of reproducing inscriptions originally made in metal, bone, or stone. It follows that the two kanji characters that combine to form “gyotaku” translate literally into “fish” (gyo) and “rubbing” (taku). The earliest known example of gyotaku—though this is somewhat contested—traces the form of a carp caught in the Mogami River in 1857. The print can now be seen in Japan’s Yamagata prefecture, at the Honma Museum, which boasts the richest collection of historic gyotaku prints anywhere in the world.

In its heyday, gyotaku was a fisherman’s best bet for bragging rights. It was used to document “trophy catches”—anything big or unusual enough that other fishermen would need to see it to believe it. As photography had just been invented and definitely could not be used on a fishing boat in roiling waves, fishermen kept on board a chest of rice paper, nontoxic sumi-e ink, and a set of brushes. As soon they caught a fish, it was a simple matter of dipping it in ink and slapping it on a piece of paper. After printing the catch, the fishermen would simply rinse off the ink and either release the fish, take it to market, or eat it themselves. These prints were not artful at that time, but more utilitarian. As the trend caught on, fishermen began adding to their prints with brushes, such as the detail of an eye or the color of scales.

Soon, knowledge of gyotaku spread to the West. In the 1950s, a Tokyo gyotaku enthusiast group called Gyotaku-no-kai organized an exhibition of prints that eventually traveled to the city’s Museum of Natural History. In 1964, Yoshio Hiyama, one of the founding members of the organization, published Gyotaku: The Art and Technique of the Japanese Fish Print, a text largely responsible for introducing the practice to an international audience. Hiyama, who worked as a fisheries research scientist, connected with colleagues at the Smithsonian, who began to recognize the potential of gyotaku as a tool for research and accurate scientific illustration. Now gyotaku is used most commonly in conservation work, primarily as an educational tool for marine animal anatomy.

That said, many fishing villages in Japan continue gyotaku in a purely utilitarian way. Each year the city of Osaka hosts an enormous fishing and angling expo, where people can show off their trophy gyotaku prints. In Keelung Prison in northern Taiwan, artist Yan Shang-wen teaches gyotaku art classes as part of a rehabilitation program, according to the Taipei Times. In 2015, his pupils held an art show at the Keelung City Hall.

Where a practical fisherman’s gyotaku would consist of a single fish in sumi-e on a sheet of white paper, the form is open to dynamic reinterpretation. Many artists now craft prints of entire shoals in vivid color, sometimes with toxic acrylic paint (i.e., no rinsing and eating when it’s all done). Other artists have begun experimenting with subjects other than fish, such as birds or plants. Rodriguez printed an entire series of gyotaku using only roadkill she encountered in Algarve, Portugal.

But to purists such as Hayashi, gyotaku is only gyotaku if you follow all three key steps—catch, print, eat. “Sometimes people call their work gyotaku without having all those three main components,” he says, in reference to prints of ornamental fish such as Moorish idols that were clearly never consumed as food. “But that’s not gyotaku. All the value and meaning behind it is brushed aside, not appreciated.” Hayashi sees his practice as directly descended from traditional Japanese fishing culture. He regularly helps clients and their children, who have caught their first fish, for example, and want to memorialize their prize—before they eat it. “That happens only once in a lifetime,” he says. “To capture it in this format and have it as a family treasure, that’s the true value of gyotaku.”

To avoid animal cruelty or contributing to the global overfishing crisis, Hayashi and many other modern gyotaku artists try to avoid waste in pursuit of their art. Unlike in the past, gyotaku practitioners no longer make prints of specimens while they are alive. Hayashi always eats his art supplies (though some don’t, out of fear the fish will spoil during the printing process). Another artist, Heather Fortner of Toledo, Oregon, uses only dead fish that wash up on her local beach. She makes several prints of each fish before burying them in her yard for fertilizer.

Hayashi elects to catch his fish himself, which he admits is the hardest part of gyotaku. And he prefers spearfishing to hooks and lures. “You become this little particle floating in the ocean, and you lose all sense of self. Like you’re a part of this Earth,” he says. When he’s out in the blue, spear in hand, Hayashi seeks out wahoo in particular—“ono” in Hawaiian, an enormous, slithering, iridescent mackerel with razor sharp teeth. Wahoo is challenging to catch, but rewarding to print and delicious to eat.

How to make your own gyotaku

Many gyotaku prints are considered fine art today, but the roots of the practice are simple and it’s very easy to make your own. Christopher Dewees, a gyotaku practitioner who belongs to the nonprofit Nature Printing Society, says there are two methods: direct and indirect. Direct prints are often more simple and monochromatic, while indirect prints are better for showing finer detail and using more colors, but are more complicated and difficult to do right.

Before you print, you’ll need a fish. If you’re not skilled in the ancient tradition of spearfishing, or don’t have a rod and reel, any good fishmonger or Asian market can sell you a whole, fresh fish. Look for one that’s relatively flat with prominent scales, such as bluegill, bass, snapper, or flounder. (If you want to make sure it’s fresh, check the smell—there shouldn’t really be one—and look for glassy eyes.) Anything too hefty or round, such as tuna or salmon, will be much more of a challenging to make a clear print of. Then use salt to clean off any mucus or excess moisture, and pat it dry.

You can use any water-soluble block-printing ink, which can be found in most art stores. Any color can work, but Dewees recommends starting off with black for practice. For the paper, the best options feature strong but flexible fibers made in Asia, such as mulberry, kozo, unryu, or goyu. You’ll also need a few small pins to hold the fish’s fins in place, and some large and small brushes to apply the ink. Prepare your printing station by lining a flat surface with paper or plastic.

Lay the fish on the printing area and pin each fin in place. Use a brush to apply a thin coat of ink from the head toward the tail, leaving the eye blank. Brush the ink back in the opposite direction, and dab away any excess with a paper towel. Then decide where you’d like to see the fish appear on the paper and place the sheet down directly onto the fish. Rub it firmly onto the fish with your fingers, but try not to wrinkle it. Then peel away the paper and set is aside to dry. Dewees says you can probably make at least five prints from the same fish, re-inking it each time, before it loses detail. So long as the ink is nontoxic, you can then wash and eat the fish.

Place fabric, silk, or paper over the top of your clean, dry, pinned fish. Moisten the covering and use a sponge and pressure to mold it to the fish’s body. Let the paper or textile dry completely. Then apply your choice of inks on top of the fabric with a brush. Peel the covering away gently, doing your best to avoid any tears. These fish can be eaten, too, but only if they’re kept cool and are not out too long.

Critically endangered, and a much-sought delicacy, the animals are imperiled at every turn.
food

Tristan da Cunha was first inhabited to keep an eye on Napoleon; now residents are looking out for lobsters.
islands

Signs of recovery for the so-called "puppies of the sea."
food

03:53
Sponsored by Defender
Want to see fewer ads? Become a Member.
From Around the Web
Atlas Obscura Trips
Artisans & Exiles: Exploring the Hidden Traditions of Japan’s Sado Island
View This Trip
Thanks for sharing!