The Librarian at the Nexus of the Harlem Renaissance - Atlas Obscura
Want to see fewer ads? Become a Member. 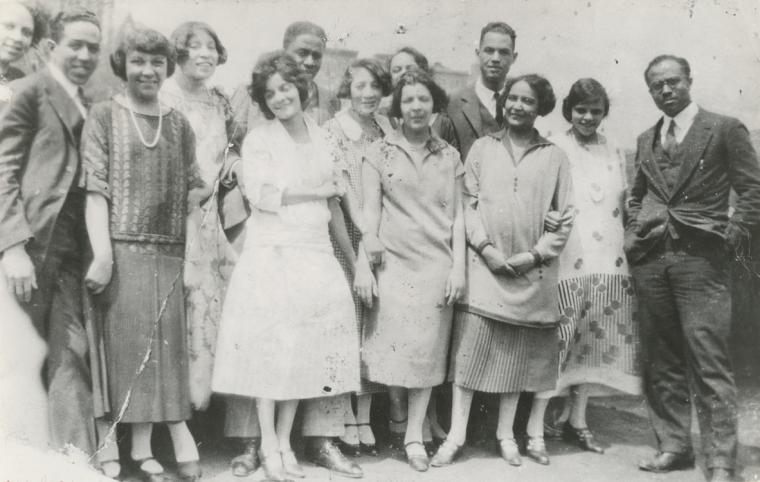 You might not know about Regina Anderson, but you’ve probably heard of many of her friends. On a typical day in 1923 or 1924, Anderson might leave her desk at the 135th Street Branch of the New York Public Library and drop a letter to W.E.B. Du Bois in the mailbox. She may go home to her apartment on St. Nicholas Avenue to check up on her couchsurfer, Zora Neale Hurston. Or she might hit the town with Countee Cullen, and then finish out the night cooking bacon and eggs for Langston Hughes.

Nearly a century after it began, the Harlem Renaissance remains one of the preeminent cultural movements in American history. And although Anderson doesn’t show up in many contemporary accounts of the period, she was there the whole time: lending out books, throwing parties, fighting for opportunities of her own, and enabling the spread of ideas that made the era what it was.

“She was that connection,” says historian Ethelene Whitmire, author of Regina Anderson Andrews, Harlem Renaissance Librarian, a biography that seeks to restore Anderson to her rightful place in the movement. “And she was there at the key time, when all the big names were arriving in Harlem.” As Anderson’s life story shows, if you’re trying to write a history book, it’s best not to forget the librarian.

Anderson never meant to come to Harlem at all. When she moved to New York City at age 21, in 1922, she posted up at a downtown YWCA, and applied for a job at the New York Public Library. As Whitmire details in her book, most libraries at that time had some form of segregation in place. Some cities, including Charleston and Dallas, barred African Americans from public libraries entirely. Others, like Atlanta and New Orleans, had separate branches for black clientele.

At the NYPL, all patrons were welcome at all branches, but when it came to employment, there was a certain amount of de facto segregation based on neighborhood demographics. Eastern European applicants were generally sent to the Webster Library on the Upper East Side, Russian-Jewish ones to the Seward Park Branch on the Lower East Side, and black applicants were habitually referred to the 135th Street Branch, in Harlem.

When Anderson was called in for her interview, she found this out firsthand. “Instead of focusing on her previous library experience”—at various institutions in and around her home city of Chicago—“the administrator was most concerned about her race,” Whitmire writes. On her application, Anderson (who had ancestors from Sweden, precolonial America, Madagascar, and India, among other places) had listed herself as “American.”

“I always considered myself an American. I don’t know what else I could be,” she explained to her interviewer. “To us you’re not an American,” he replied. “You’re not white.” And so, although Anderson had never been to Harlem, she, too, was sent to the 135th Street Branch.

At that time, the head of the branch was Ernestine Rose, a white woman who was determined to make the space as useful as possible to the neighborhood. “Rose was someone who was thinking outside the box during that time period, in terms of services for African Americans,” says Whitmire. “She really wanted to reach out to the community.” By the time Anderson started full-time as a junior clerk, in April of 1923, the branch had become a hotspot for many different groups. Over the course of a typical week, the library might host meetings of the local chapter of the NAACP, the Anti-Lynching Crusaders, and a high school boys’ club dedicated to the study of black history.

Anderson’s new post was eye-opening. As Onita Estes-Hicks put it in the African American National Biography, she quickly realized that “she herself was a victim of an educational system that had disregarded black contributions to America,” and set about filling in her own gaps in knowledge. At the same time, she embraced the outreach aspects of her job. She helped to set up weekly talks by Hubert Harrison, a socialist and public intellectual known for his street-corner speeches. She also took over publicity efforts for the North Harlem Community Forum, a weekly lecture series focused on the issues of the day.

The speakers and topics were wide-ranging—one week, radical orator Hubert Harrison talked about Sir Arthur Conan Doyle; another, Margaret Sanger spoke flanked by a police detail, in case she tried to distribute birth control literature—but many of these memorable evenings started thanks to a letter from Anderson. One she wrote in November of 1924, to W.E.B. Du Bois, is typical: it goes over recent highlights of the forum, asks when he will be available to speak there, and then requests an in with one of his friends, so she can send him a similar message.

Meanwhile, as Anderson actively built a network of established names, just being at the library brought her into contact with a number of up-and-comers. A lot of Harlem transplants made visiting the 135th Street Branch a top priority, Whitmire says: “After they got a place to live at the local YWCA or YMCA, they would often head to the library.”

When they arrived, Anderson made a point of securing space for them to work on their projects. This is how she met Langston Hughes, Eric Walrond, and Claude McKay. She also brought new books home—sometimes seven or eight a day—skim them, and put together notes, so that she could recommend these authors to her patrons and to each other. “She was reading everything new that was coming through,” says Whitmire.

Anderson’s work life and home life began to meld further. Soon after she started working at the 135th Street Branch, Anderson moved into a fifth-floor apartment five blocks north at 580 St. Nicholas Avenue with two other young women, Louella Tucker and Ethel Ray (soon to be Ethel Ray Nance), who both worked at Opportunity, a popular African-American magazine. The apartment was swanky, with a great view of the area. The three roommates called it “Dream Haven.”

Thanks to the roommates’ connections, the people who passed through through Dream Haven made up a “who’s-who of the Harlem Renaissance: artists, poets, writers, songwriters, intellectuals, and activists,” writes Whitmire. Langston Hughes and Arna Bontemps met there, and struck up a friendship that lasted nearly half a century. The poet Countee Cullen would stop by almost every night and occasionally workshop his poems; when he graduated from college, the roommates took him to his first cabaret, teasing him because he’d written verses about something he hadn’t yet experienced.

In 1924, Zora Neale Hurston ended up sleeping on the Dream Haven couch for a while. Another frequent guest was Carl Van Vechten, a white writer and photographer; after he published a controversial book with a racist title based on his experiences there, he was apparently kicked out. Anderson and Ray helped organize the March 21st, 1924 Civic Club dinner that brought dozens of black intellectuals together, and which some say crystallized the Harlem Renaissance. Afterwards, many of the attendees came back to Dream Haven and ate bacon and eggs.

Often, at the end of the month, when the roommates’ money was running out from all this hosting, Du Bois—a friend of Nance’s father—took them on trips: upstate, or to Coney Island for shrimp cocktail and oysters. “It seemed he enjoyed our adventurousness and spontaneity,” Nance recalled. “We were always doing something, having people at the apartment, meeting new people.” Anderson, too, found herself inspired by her social circle: she was eventually involved in two different theater groups (both of which, for a time, practiced at the 135th Street Branch), and wrote three plays, under the pen name Ursula Trelling.

Throughout, Anderson kept focused on her job. She would later write that she saw “the use of books as our strongest means of promoting intercultural understanding.” When she was invited to the massive eight-day wedding of heiress Mae Walker Robinson, she brought “a set of books” as a present. In 1926, she, too, got married—to Bill Andrews, a lawyer for the NAACP—and her maid of honor was groundbreaking novelist Jessie Fauset.

By this time, Anderson had transferred branches twice, and was now stationed at the Woodstock Branch, in the Bronx, where she was the first African-American librarian. But she felt her career had stalled out: as she moved up in the ranks, there were fewer and fewer jobs that the NYPL seemed willing to give to her, while her white colleagues jumped ahead. “She was very thankful for the opportunity to work at the library, but it also seemed that the library did have some policies that were restricting her in terms of her ability to get promoted,” says Whitmire.

After an intervention from her friend W.E.B. Du Bois—“there were lots of letters exchanged” between him and NYPL higher-ups, and he briefly boycotted the branch, Whitmire says—Anderson (now Andrews) eventually got her promotion. In 1938, she advanced again, and became the first ever African-American head of a New York Public Library branch, on 115th Street. She would later head up the Washington Heights branch, where she continued to bring in speakers, encourage community use of the library, and host theatrical groups. Due to the NYPL’s strict retirement policy, she left the library in 1966, at age 65, after 40 years there. After spending much of her later life traveling, she passed away in 1993.

In the years since Anderson retired, the 135th Street Branch expanded, and is now known as the Schomburg Center for Research in Black Culture. (It houses many of Anderson’s papers and photographs.) Dream Haven is listed as an NYC LGBT Historic Site, thanks to the figures who passed through it. And if you ask someone to name a quintessentially American movement—one characterized by its disparate ideas, figures, and—they very well might mention the Harlem Renaissance.

Whitmire has found Anderson to be a good role model for educators in any time period. “In one of her speeches, she said, ‘We must be more than librarians,’” she says. “It’s not just about being in libraries, but getting out there.” If you do it right, one naturally leads to the other.

The “she generalissimo” nearly won the English Civil War for her husband, King Charles I.
vikings

From California’s mythic warrior queen to the swole women of Sparta to female hunters in ancient Peru.
paintings

Meet the painter, the pilot, the author, and other "firsts" who paved the way.
libraries

Yale has acquired some of the Black photographer’s best-known images.
Video