How to Make Ice-Cream Cocktails Like a True Wisconsinite - Gastro Obscura
Want to see fewer ads? Become a Member. 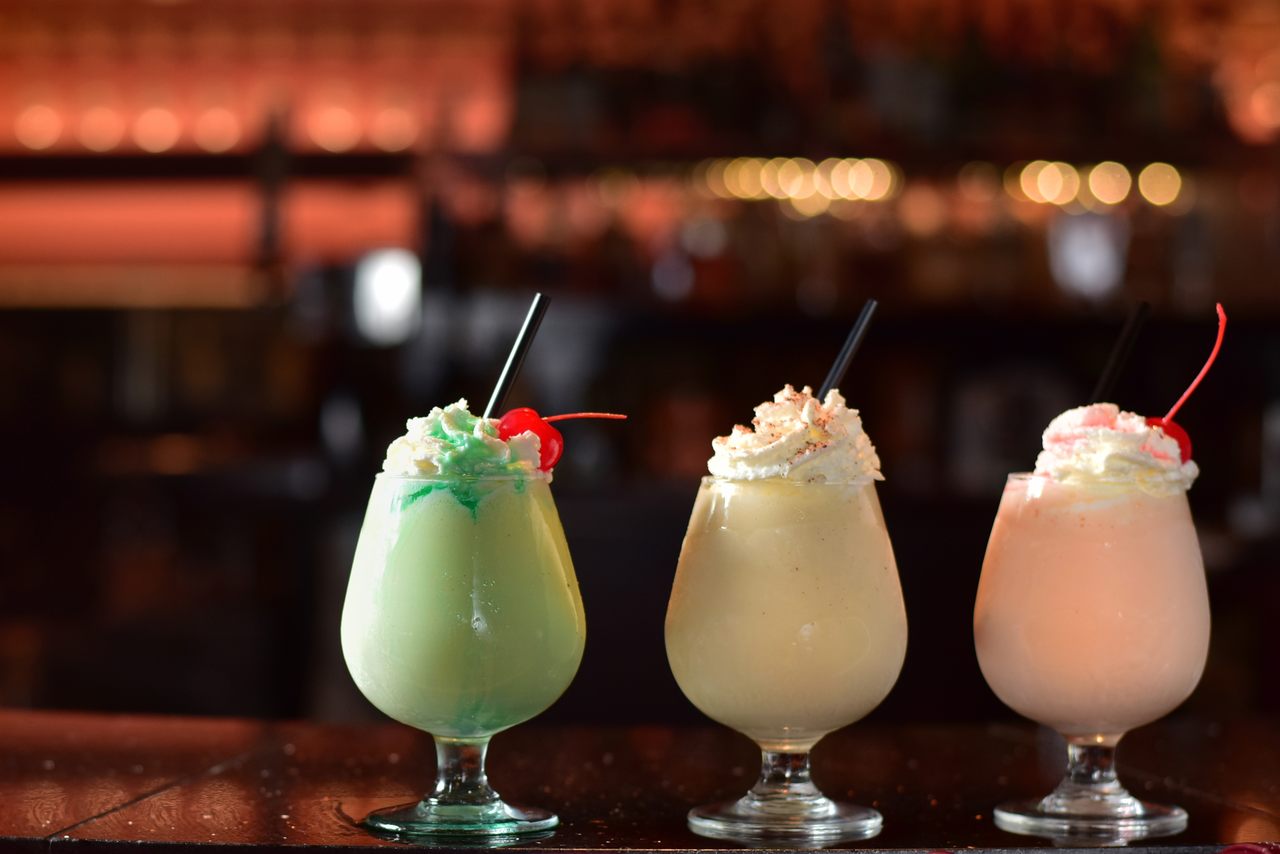 A Grasshopper, Brandy Alexander, and Pink Squirrel at the Del-Bar in Lake Delton, Wisconsin. Del-Bar
In This Story
Place

A Wisconsin kitsch palace from the 1930s lives its second life in 21st-century Brooklyn.
Destination Guide

If you order a Brandy Alexander or a Grasshopper in most parts of the United States, you’ll get a lovely, creamy drink, made with heavy cream or half-and-half. In Wisconsin, though, ordering one will get you not so much a drink but decadence embodied. Across the state, Brandy Alexanders and Grasshoppers are a dessert, often topped with whipped cream, sometimes topped with chocolate pieces, but almost always made with ice cream. And, of course, booze.

Elsewhere, booze and ice cream together is called a boozy milkshake. Though some Wisconsin bars and restaurants now put “boozy milkshakes” on their menus, most places still call them ice-cream drinks. Or, rather, just drinks. And any supper club—the fancy, countryside restaurants that came of age in the ’40s but never went out of style in Wisconsin—worth its relish tray serves up hundreds of them on a Saturday evening.

But how did Wisconsin end up combining booze and ice cream together—and combining them in such large quantities?

Part of the answer to this question is just that Wisconsin is America’s Dairyland, and though it produces plenty of heavy cream and half-and-half, the state produces a lot more ice cream and frozen custard. Two Rivers, Wisconsin, claims to be the birthplace of the ice-cream sundae, and the Wisconsin dairy industry has always promoted ice cream.

“The whole kind of dairy tradition—custard and ice cream—is so strong, it kind of makes sense that they were paired together with cocktails,” says John Dye, owner of three historic bars in Milwaukee, Bryant’s Cocktail Lounge, At Random, and The Jazz Estate. “I’ve always been of the opinion that in Wisconsin, we can take anything that’s bad for you and make it worse.”

Besides the strong dairy tradition, Wisconsin also has a strong manufacturing tradition. The first blender (as we know it) was invented by a Polish immigrant, Stephen Poplawski, in Racine, Wisconsin. In 1922, he received a patent “for the first mixer of my design having an agitating element mounted in a base and adapted to be drivingly connected with the agitator in the cup.” In 1940, he patented a home mixer and later sold his business to the John Oster Manufacturing Co., which renamed this mixer the Osterizer.

But that’s just one of the blenders with Wisconsin roots. Another forerunner of the blender, the Cyclone Drinks Mixer, was also invented in Wisconsin, in 1911. Even during Prohibition, the inventors kept working on the device, and in the ‘30s, they approached big-band leader Fred Waring for financing, which would be a bit like approaching Taylor Swift or Kanye today. A former engineering student who liked gadgets, Waring promoted the heck out of it and plugged its use for cocktails. It’s still known as the Waring blender.

For a long time, blenders were manufactured in Wisconsin by both companies, and sold to plenty of homes, bars, and restaurants within the state. Having them on hand could be a reason why Wisconsin residents enjoy ice-cream drinks—because the bars and restaurants were outfitted to make them.

It’s also the case, as I was surprised to learn, that Wisconsin has a much stronger and consistent devotion to cocktails, and unique drinking culture, than perhaps anywhere else in the United States.

But while most states have some semblance of a drinking culture, it’s not usually very interesting, or it’s not really that different from many other states, and most states don’t really have an official or even unofficial cocktail that practically everyone in the state either drinks or at least holds an opinion about. This surprised me. Because I live in Wisconsin. Everyone here knows that the Old Fashioned is our unofficial state cocktail, and most of us hold strong opinions about how we should drink them—brandy or bourbon; sweet, sour, or pressed; and whether a cherry or pickled Brussels sprout or whatever should be served with it. We have cocktails that are so unique to Wisconsin that if we ask for them a certain way, whether we’re in Las Vegas or Orlando, Manhattan or Miami, the bartender will go, “Oh, are you from Wisconsin?”

Not only that, Wisconsin never stopped making cocktails. While some states may have experienced what lofty craft mixologists consider to be the “Dark Age of Cocktails,” aka the 1970s and 1980s, we never did. Go to any dive bar, corner tavern, or sports bar in Wisconsin, and the bartenders should know how to make a proper Old Fashioned (even if it’s not muddled, and they add a cherry syrup or old-fashioned mix to make it quickly). They also should add more than a measly pickle to garnish your Bloody Mary, and they sure as heck know that every good Bloody deserves a beer chaser or snit. And even if they don’t advertise it on their menu, they might just make you a proper Grasshopper with ice cream—and if they don’t serve ice-cream drinks, the place next door probably does.

So if you want to learn from a century of strong, dairy-heavy cocktail culture, grab a blender, choose a recipe, and cool off with one of these six ice-cream drinks like a true Wisconsinite.

Pour crème de menthe and crème de cacao into the bottom of a blender. Top with ice cream. Blend until creamy and smooth. Pour into glass, top with homemade whipped cream, then drizzle crème de menthe on top.

Pour crème de noyaux and crème de cacao into the bottom of a blender. Top with ice cream. Blend until creamy and smooth. Pour into glass, top with homemade whipped cream, then drizzle crème de noyaux on top.

Place all ingredients into a blender and blend until smooth. Garnish with chocolate shavings, an orange peel, and a toasted cinnamon stick. Orange-cinnamon milk can be made by combining ¼ oz. orange zest, ¹⁄4 oz. toasted cinnamon stick, and 2¼ cups Sassy Cow Creamery whole milk (or other milk).

Yabba Dabba Do It

Place all ingredients into a blender and blend until smooth. Pour into a shake glass. Top with cake balls, then top with whipped cream and more crushed Fruity Pebbles cereal. Cartron Marasquin is a liqueur made from small, bitter cherries grown in Croatia. It is a very balanced, slightly sweet liqueur with a pronounced stone cherry flavor. If you can’t find it, you can substitute with another cherry liqueur. Cake balls are basically mini cakes cooked into ball shapes. You can buy them at bakeries and at some coffee chains, but you can also make them at home with cake pop kits.

Pour crème de cacao and brandy into the bottom of a blender. Top with ice cream. Blend until creamy and smooth. Pour into glass, top with homemade whipped cream and nutmeg.

Place all ingredients into a blender and blend until smooth. Garnish with sugar cookie crumbles and a fresh cherry.

The Museum Where Racist and Oppressive Statues Go to Die

The state with the biggest cocktail culture has an enduring affection for the spirit.
military history