The Bone-Shaped Sweets That Honor the Dead in Spain - Gastro Obscura
Want to see fewer ads? Become a Member. 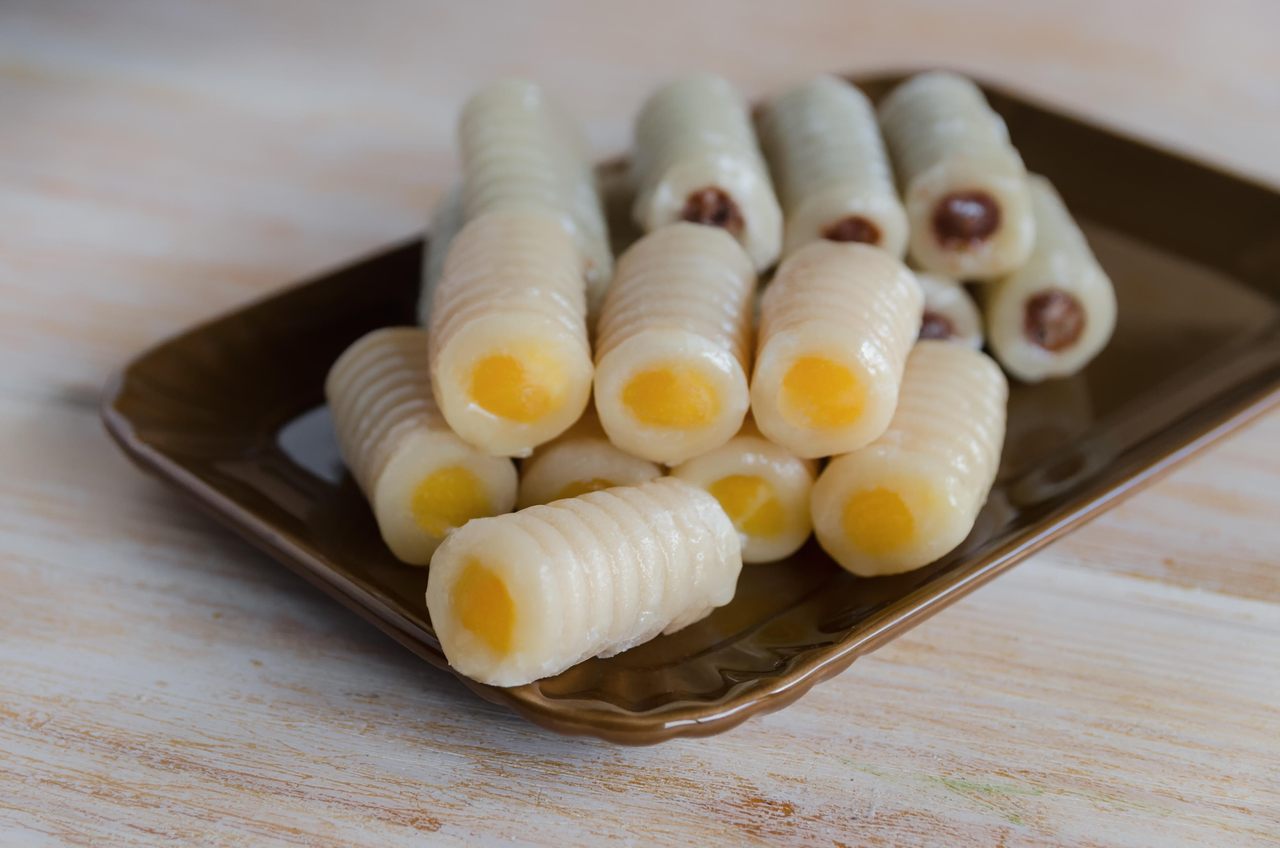 On Día de Todos los Santos in Spain, families across the country head to cemeteries, laying colorful flowers on the graves of their loved ones and remembering the legacies their relatives left behind. After paying their respects, they head home for a holiday feast that culminates in an unusual dessert: bones. But unlike other skeletal parts, these bones are soft and nutty, filled with an intensely sweet candied paste.

Visit Spain in late October or early November, and you’ll find bakeries and sweets shops stocked with these little figures, known as huesos de santo (saint’s bones). In their most classic form, these marzipan-based sweets come stuffed with a candied egg yolk paste, similar to the traditional Spanish yemas. Spaniards consume the treats in celebration of the Catholic holidays, Día de Todos Los Santos (All Saints’ Day) on November 1, and Día de Los Fieles Difuntos (All Souls’ Day) on November 2.

Rolled into tiny logs with a sweet center, the marzipan treats resemble bones with marrow inside. While their appearance may seem macabre, their role in Spain is far from frightening. Juan Manuel Albelda—the manager of Obrador San Telesforo, a Toledo-based marzipan company that dates back to the early 1800s—notes that eating huesos de santo is a way to remember the dead, not fear them. “They serve as a way to respect those who have died and to show that we haven’t forgotten them,” he says.

This belief also touches upon the modern meaning of All Saints’ Day, which not only features the sweet “saints’ bones” to commemorate canonical saints, but to celebrate all who have passed purgatory and are in the presence of god. On All Souls’ Day, which is now celebrated less widely, huesos de santo are consumed in honor of all who have died but are still cleansing their souls of sin in purgatory.

How, exactly, Spaniards started eating bone-shaped sweets as a way of remembering their loved ones is a bit of a mystery. As is often the case with historic recipes, theories on huesos’ origins abound, but they likely have their roots in pagan holiday traditions. Todos Los Santos traces its origins to the Celtic celebration of Samhain, which coincides with the end of the fall harvest. On Samhain, many believed that the boundary between the worlds of the living and the dead was blurred, making it possible for the deceased to visit their living families.

Food historian Isabel Lugo says that in the pre-Christian period, it was typical for the Celts to commemorate their lost loved ones with bread or cereal-based dishes. “They would relate the deceased with the agrarian cycle,” Lugo says. “It was custom to celebrate the dead by eating or symbolically offering them different special breads.”

But pagan practices transformed over centuries of Muslim and Christian rule over the Iberian peninsula. By the time Catholic monarchs Ferdinand and Isabella rose to power in the 15th century, Christian rulers had grafted many Church traditions onto existing pagan ones, including Samhain, which became a day of reverence for martyrs.

According to Sura Ascaso—the business development manager of Pastelería Ascaso, a pastry shop in Zaragoza famous for its huesos—a popular legend contends that a Benedictine monk created huesos de santos as part of this effort to blend pagan and Christian traditions. While unproven, the legend would link huesos to other monastery-made sweets that resemble body parts and saintly relics.

Today, huesos de santo are mostly associated with the Catholic holidays, including Holy Week in Andalucía, where they are sometimes served along huesos de San Expedito, another saintly, bone-shaped sweet. But they are also tied to some harvest traditions. In Ceuta, for example, huesos are linked to Día de la Mochila, a celebration in which families fill backpacks with nuts from the fall harvest, and head to the woods for a feast that features huesos as a dessert.

In bakeries and sweets shops across Spain, huesos now come in diverse flavors and varieties, such as covered with chocolate, stuffed with praliné, or even colored pink by a raspberry marzipan base. Yet both Juan Manuel Albelda and Sura Ascaso agree that the most popular variety is the original version.

Although it’s hard to pin down the exact origins of huesos de santo, Lugo notes that the varied origin theories highlight just how many traditions and cultures are mingling within the story of these sweets. Even though the festival of Samhain is no longer widely celebrated (it is, however, still celebrated in Galicia), Spaniards still carry on the tradition of coming together every fall to connect with the dead through food.

Curious to try huesos de santo? Check out the recipe below.

1. In either a large mixing bowl or a food processor, thoroughly mix the confectioners’ sugar, salt, and 1 ½ cups almond flour. Add in the egg whites and vanilla or almond extract, then pulse or stir until thoroughly combined. Gradually add in as much of the remaining ½ cup almond flour as needed to form a soft, but reasonably firm dough.

2. Dust a work surface with confectioners’ sugar and knead the marzipan several times until it forms a cohesive ball. Wrap the ball tightly in plastic wrap and refrigerate overnight.

4. Place a sheet of parchment paper on a baking sheet and keep it nearby while you work. Roll the marzipan out into a rectangle roughly ¼ inch thick. Using a pizza cutter or a large knife, slice the marzipan into even squares of about 1 ½–2 inches on each side.

5. Using either the handles of narrow wooden spoons (traditional) or chopsticks (somewhat unorthodox, but effective), roll each of the marzipan squares around your tool of choice into the shape of a cylinder, and place them on the prepared baking sheet. The marzipan should be firm enough to hold its shape, but you may want to leave a chopstick or spoon in each one temporarily for structural support. Score the top of each of the cylinders with a fork for decoration. Once all of the marzipan tubes are rolled, cover the baking sheet loosely with plastic wrap and place in the refrigerator.

6. To prepare the filling, bring several inches of water to boil in a medium-sized pot. In the bowl of a double-boiler, whisk the egg yolks, then set aside.

7. Make a simple syrup by combining the sugar and ¼ cup water in a saucepan. Bring to a boil, whisking constantly, until all of the sugar is dissolved.

8. Gradually pour the hot sugar syrup into the beaten egg yolks, whisking furiously. This will temper the yolks and keep them from scrambling. Add in the salt and vanilla extract.

9. Place the bowl over the pot of boiling water and reduce to a simmer. Whisk constantly until the egg mixture forms an opaque custard. You should be able to drag a spoon across the bottom of the bowl and leave a trail. This should take roughly five minutes. Be careful not to cook it for too long, as the mixture will harden. As soon as the mixture has thickened, remove the bowl from heat and continue whisking for several more minutes.

10. Once the egg filling has cooled very slightly, spoon it into a prepared pastry bag. Remove the marzipan from the refrigerator. If using chopsticks, remove them from the marzipan cylinders at this stage. Pipe the still-warm filling into each end of each cylinder. It will set as it continues to cool.

11. As an optional finishing touch, use a small sieve to dust the huesos de santo with additional confectioners’ sugar.

Join us for a daily celebration of the world’s most wondrous, unexpected, even strange places.
festivals

It Takes a Village to Feed Cambodia’s Ravenous Ghosts

When the gates of hell open on Pchum Ben, communities gather to feed returning ancestors with sweet and savory rice cakes.
saints

A pastry shop specializing in Sephardic sweets serves historic recipes in Ribadavia’s Jewish quarter.
Want to see fewer ads? Become a Member.
From Around the Web
Atlas Obscura Trips
Barcelona & Catalonia: A Feast for the Senses
View This Trip
Thanks for sharing!