Why Doesn't Iceland Have a Museum of Napkins? - Atlas Obscura
Want to see fewer ads? Become a Member. 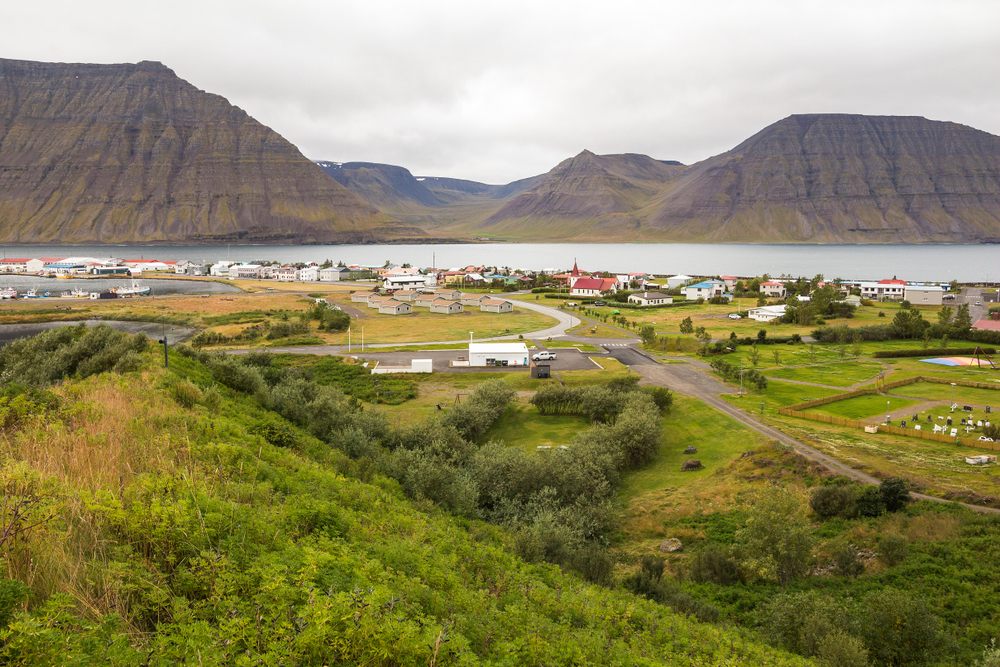 The tiny village of Flateyri has 200 residents and no fewer than five museums. Shutterstock/Robin Runck
In This Story
Destination Guide

It’s already there in the language: the way safn is both a collection and a museum, and part of the Icelandic word for library, and a term one might use to describe a group of sheep. It’s there, too, in how sets of things in the parlor have a way of moving outside the home—to sloping mountainside yards, to lakeside sheds, to downtown storefronts. It’s the Icelandic predilection for museums, for turning private collections into public displays—evident in places such as Petra’s Stone Collection, Sigurgeir’s Bird Museum, the Icelandic Phallological Museum, and the toy museums in Akureyri, Borgarnes, and Grudafjörđur, or the transportation collections, which can be found in the north and west and south. Iceland is a land of museums. It has a genius for them, in all sorts and forms.

As I researched my book, The Museum of Whales You Will Never See, I sat down with many collectors, curators, and directors to ask about the origins of their museums. I heard the same progression so often that I came to recognize its stages. Someone, almost accidentally, has a collection. The neighbors drop by to see. Then a community group makes an appointment. The newspaper writes something up, maybe the television news, too. And then more people come. Strangers. Tourists. Until you have to do something with all that interest, all those people dropping by. Indeed, the pattern happened often enough—private collections becoming public by degrees—that I began to think that the next one could be predicted.

So I started asking every Icelander I met: Where is there a collection big enough, known enough, visited enough, that it is in one of those stages, maybe getting close, about to tip into being a museum of its own?

To count museums in Iceland, to collect them in a way, is astonishingly complicated. There is a minimum of 45 officially accredited institutions, but the annual Iceland Museum Guide lists 173. Understood broadly enough to include not just the museums, but also what might come into English as public collections, exhibitions, galleries, or centers, the running tally from University of Iceland museum studies professor Sigurjón Baldur Hafsteinsson is more like 300. Nowhere in the world do private collections become public museums with such ease. It is a phenomenon all the more stunning for having happened, almost entirely, in the last 25 years.

The Icelandic town of Flateyri has a population of 201 people and five museums. Six if you count the one on the outskirts. Seven if you count its first museum, founded in 1992, now buried with a third of town by an avalanche in 1995. It is wildly disproportionate, even in a country that has nearly one museum per thousand people. Flateyri, on a northwest fjord just a couple hundred miles from Greenland, has a museum for every 40 residents.

The museums of Flateyri include a tribute to dolls of the world in the middle of a restaurant, a fleet of model ships in a garage, historical displays in a well-worn shed, and a 1915 general store and living quarters (not lived in anymore, but still selling used books, by the kilogram, weighed out on a blue vintage balance). And there is also, in a sprawling second-floor space overlooking the street, the Nonsense Museum.

I had been watching and studying this particularly Icelandic hyper-evolution, the way collections suddenly become museums, when I first came across the listing for the Nonsense Museum in a 2015 Museum Guide. It felt like a thing preordained, like finding the species to fill a gap in the fossil record. It felt like a thing you could have predicted: a museum about collecting itself, a museum about an idea, about its own patent absurdity.

Yet the Nonsense Museum, while spectacularly named, is more random than absurd. It offers whole rooms devoted to the collections of local residents: pens, toy planes, wine bottle labels, tobacco packaging, matchboxes, teaspoons, sugar cubes, playing cards, Pez dispensers, salt and pepper shakers, lighters in novelty shapes, police uniforms on faceless dummies, monkey tchotchkes. Seen together they comprise a museum that is almost fractal: Within this island that collects so many museums, there is a town of so many museums, including a museum of so many collections, collections of so many things.

And in the shadow of all this, I was still asking for the moment before, still looking for a collection on the brink of becoming a museum.

There were surprisingly few leads. Almost nothing. Then in Heimaey, an island off an island, after a few calls, I was taking off my shoes to walk into a private home. In the living room: drawers and drawers of paper napkins. On the loveseat and the sofa, piles of binders overflowing with yet more napkins. The collection began in 1955. Napkins with dates printed on them went back at least to 1962. A confirmation in 1979. The end of school in 1993. A wedding in 2001. Among the napkins were a scallop-edged floral from when the collector was five years old, another in a duck pattern that matched her sister-in-law’s tablecloth years ago, others from Lykil Hotel or Pizza Hut or the Military Air Transport Service of the U.S. Air Force. Flowers and fruits and angels and farms and Disney characters and Santa Claus: maybe 14,000 of them in all.

Eygló Ingólfsdottir collects napkins “because when I was growing up there was nothing to do.” No television. No phone. But there were so many girls with the same idea back then, she says, six or seven might show up in a snowstorm after Christmas or Easter to ask if you had any napkins. They collected them in duplicate to have some to trade with their friends. This collection survived the volcanic eruption that evacuated the island when Ingólfsdottir was 24 and kept her family away for three years. The collecting peaked in her mid-30s. Everywhere she went, she asked, “Do you have some napkins?” For a while in her 40s she focused on napkins printed with good landscapes to serve as references for painting. Over the last 10 or 15 years, more come in from friends than she collects herself. She’s swapped a few napkins with collectors she’s met online—one in Germany and two from Norway. With her mother about to turn 100, she says maybe they’ll print some napkins for that.

I had never seen a napkin collection. Now that I know to look for them, know the thing to ask, I’ve found a few more tucked away in private homes. In this place that excels at the narrow niche museum, or else the kind of local history museum that Icelanders call the “same things from 50 different farms,” the napkin collections still seem a kind of secret.

This is the case even though a generation of children made a point to collect them from every local wedding and baptism, received napkins as souvenirs from family who brought back airline cocktail napkins or paper goods from abroad. There are middle-aged and older women, throughout the island, who still have thousands, sorted into bags and boxes by theme or era, but never enough time to count them all—and no one is thinking there’s a museum just waiting to spring from this personal history, this alternative primer on mass production and graphic design, this artifact of a nation opening up to the world and finally having enough money for disposable things.

Perhaps the napkins have yet to see public display because they’ve been overlooked, lost in the shuffle. Too trivial, too ubiquitous, though that hasn’t prevented collections of toys or birds or rocks or automobiles from becoming museums. Maybe we’re a hair too soon in the process—precocious—and we need to lose more of these collections before Icelanders see fit to save any. Maybe the issue is that we still think this is about napkins and not about the stories they tell. There is a way in which it still seems inevitable to me, though. One of these napkin collections will take.

Ingólfsdottir’s friends still come over to see the napkins. She’s even thought of sending some to a museum, though it would break her heart to give the collection away or break it up. What she likes best is when women her age look through the collection in the living room and it brings back good memories. But then, she says, “It’s a small house. I may have to stop.”

The Mississippi Town Where Elvis Tribute Artists Are Made

The Rosenbach museum is home to Bram Stoker’s original notes on vampires and a growing collection of undead literature.
museums

4:00
Want to see fewer ads? Become a Member.
From Around the Web
Atlas Obscura Trips
Iceland in Winter: Natural Wonders & Ancient Legends
View This Trip
Thanks for sharing!