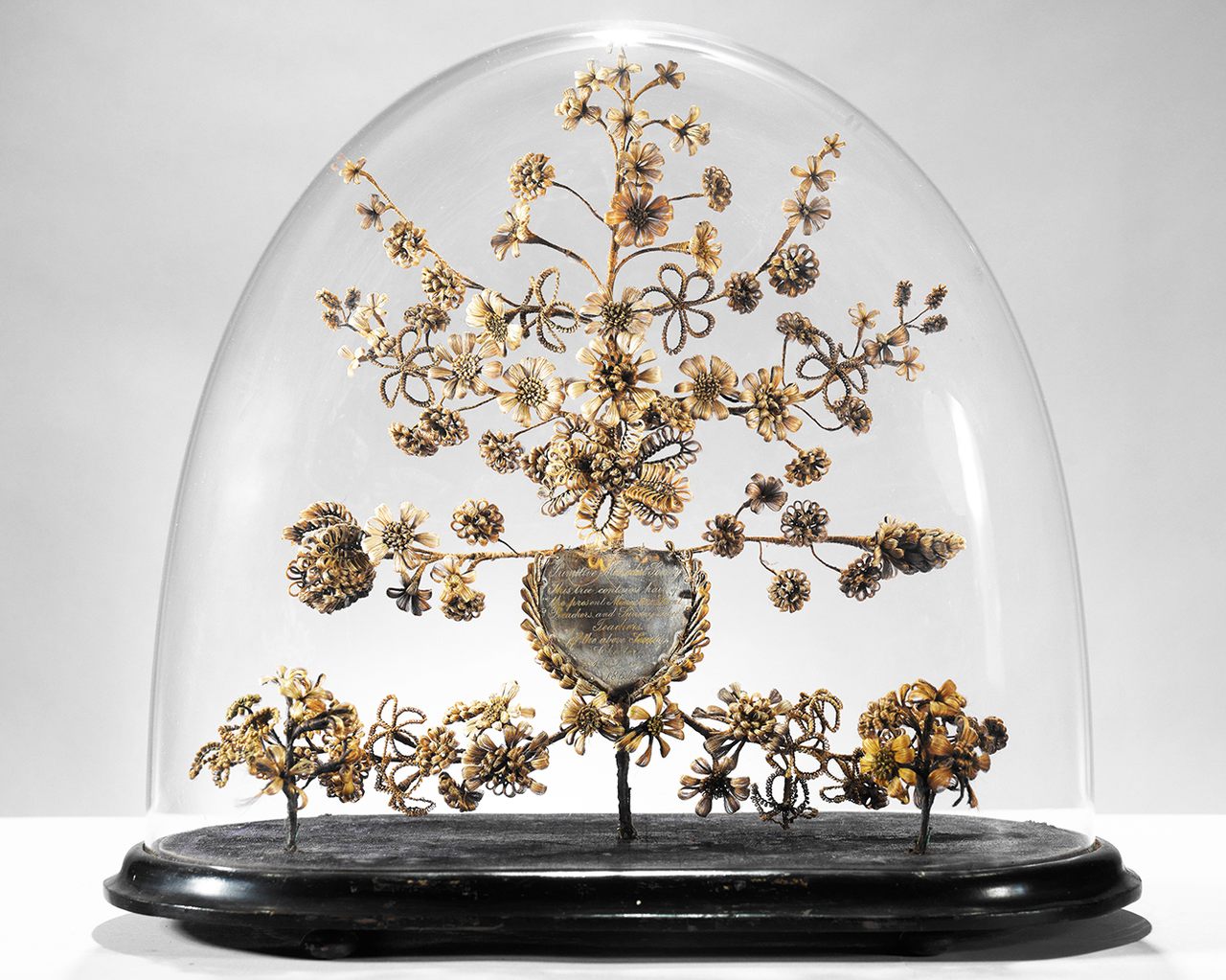 In 1867, a man named Mark Campbell published a 276-page book called Self-Instruction in the Art of Hair Work, Dressing Hair, Making Curls, Switches, Braids and Hair Jewelry of Every Description. That long title is just the tip of the iceberg: After pages and pages of instructions and illustrations, he writes, “there is much more to be said on this subject …” Yet this volume does, in fact, capture, the assiduous level of detail required for creating decorative items or jewelry from human hair.

Human hair work was around long before Campbell’s manual, but it reached peak popularity in the 19th century. “Sentimentality was at its height,” explains Emily Snedden Yates, Special Projects Manager at the Mütter Museum of the College of Physicians of Philadelphia. Snedden Yates is co-curator of the upcoming exhibition Woven Strands: The Art of Human Hair Work, which will showcase five different private collections of hair art. “There’s different kinds of hair art and there are different purposes,” she says. “One is for mourning, and then one is for family trees, or friendship keepsakes, so there’s different imagery you’ll see in those things.”

Hair work is often closely associated with memento mori, and during the second half of the 19th century, there was an increase in using hair as a token of remembrance as well. Snedden Yates notes that the mass casualties of the Civil War heightened the desire for memorialization in the United States. In England, Queen Victoria’s mourning of Prince Albert, who died in 1861, included commissioning hair work. At least eight pieces of jewelry were made by the royal jewelers, Garrard’s, with Prince Albert’s hair, one of which included hair of other royal family members. This, in turn, helped to popularize mourning jewelry.

However, plenty of hair work was shared squarely within the realm of the living. “Officially, with the hair art that is known, still more exists for living people like family trees or family exchanges or friend exchanges,” the curator says.

The techniques used to create decorative items from hair were varied, but they shared a scrupulous attention to detail. Palette work tends to be for jewelry and larger works, and is a technique where you’ll see woven hair in patterns, explains Snedden Yates.* Clean, flattened hair was woven or mixed with a sap-like material to create a sheet, which was then crafted into shapes. “That usually goes under glass, or it goes on top of ivory, in jewelry. We have a few pieces in the show where there’s palette work on the inside with the person’s hair, that is close to the heart, that is facing the person wearing the piece of jewelry, whereas the outside of the jewelry is a painting of a mourning scene or something.”

The gimp work technique lent itself to memorial pieces. “You would take individual strands of hair and make them into loops around wire, and then you would do these tiny loops on the wire over and over and over again,” Snedden Yates says. Eventually, using more twists, needles, hair, and patience, you could produce a long, twisted wire of hair loops, ready for shaping.

Another form, table work, is the primary focus of Campbell’s 1867 guide. The table used resembles a small stool with a domed surface, on which strands of hair were laid out and weighted with wire, wood, or lead. The strands were then woven into braids and, according to Campbell’s manual, manipulated into a dizzying array of designs. There are anchors, hearts, knots, bows, leaves, flowers, and lyres. They could take the form of long necklaces or stubby earrings. There are brooches with entire cemetery scenes and one resembling the London Tube logo.

A fourth technique was known as dissolved hair work, and was particularly popular in the 18th century. “It was used mostly to depict miniature scenes of mourning, or lettering,” says Snedden Yates. The hair was pulverized into a pigment, she explains, and mixed with gum arabic to create a viscous substance that could be painted onto ivory. “Its very exquisite details, the miniature paintings, they’re phenomenal.”

Despite the high level of expertise and care needed to make it, hair work wasn’t solely the domain of professional jewelers. Jewelers appear to have done a brisk trade in hair—one renowned London shop reportedly had 50 employees in the mid-19th century—but it was also practiced in the homes of a particular class of women. On the basis of the designs of many mourning pieces, “the people making it were wealthy, generally middle-class, white, women, Christians, so you’re going to see the iconography that affects their lives,” says Snedden Yates.

There is also some evidence that women took up the craft themselves because they feared being hustled by unscrupulous jewelers, who swapped the hair of a loved one for thicker or more malleable strands. In his preface, Campbell puffs, “Persons wishing to preserve and weave into lasting mementos, the hair of a deceased father, mother, sister, brother, or child, can also enjoy the inexpressible advantage and satisfaction of knowing that the material of their own handiwork is the actual hair of the ‘loved and gone.’ No other work ever met with such an earnest demand as this treatise upon the art of Hair Braiding.”

The popularity of hair work diminished with the outbreak of World War I. “People were expected to donate as much money as possible to the war” or volunteer, says Snedden Yates. “I think that really just put a stop to all the sentimentality and the over-the-top mourning and rituals.”

But hair art does live on. As part of the exhibition, the Mütter Museum is hosting a hair art workshop in April. If you’d leave the hair art to Victorian ladies of leisure, the exhibition runs from January 18 to Thursday July 12, 2018.

* Correction: This article has been updated to reflect that palette work was not used just for intricately patterned jewelry, following a clarification from our source.

Medieval Times Is Now Ruled by a Queen

These old American school buses are a fixture of daily life across Central America.
haunted

The times have changed, but the thrill remains the same.
art