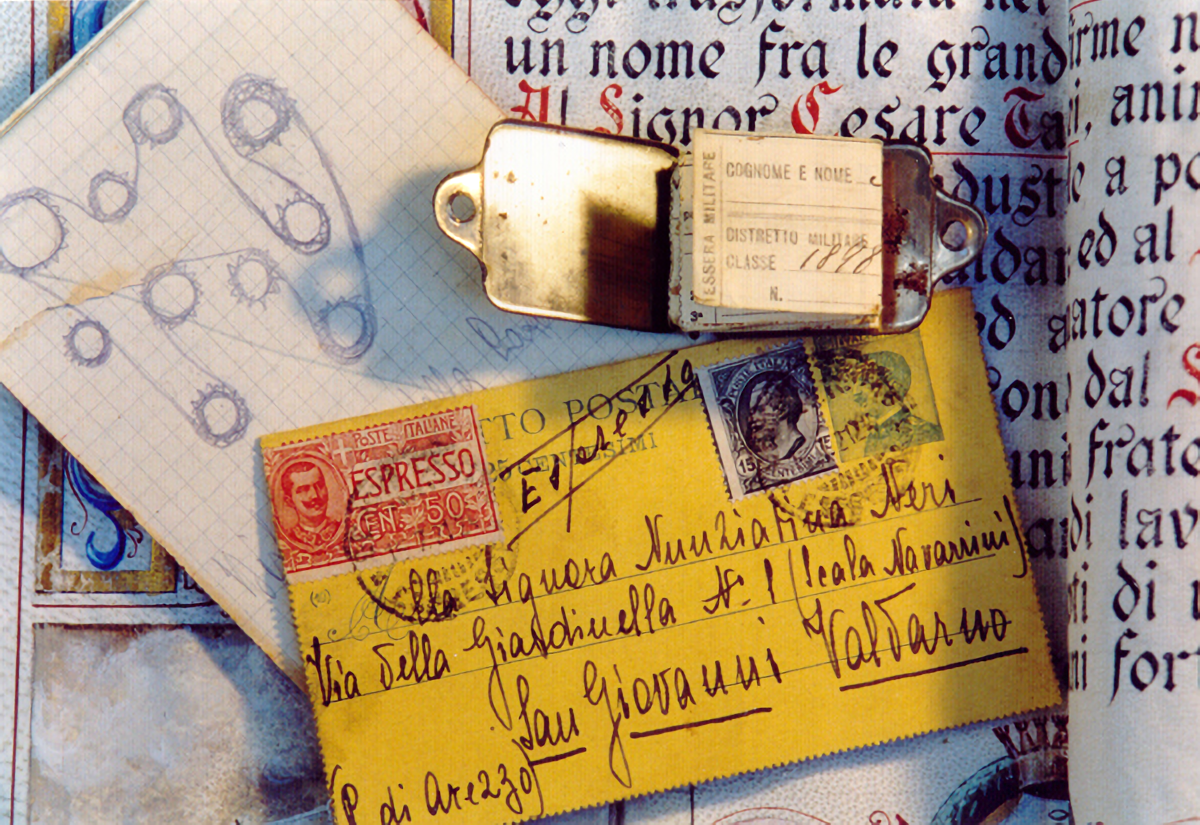 A smattering of autobiographical materials at the Archivio Diaristico Nazionale, aka the National Diary Archive. ©Luigi Burroni
In This Story
Destination Guide

Drive the long way from Florence to Arezzo, where the highways of western Tuscany gradually give way to sun-baked backroads, and it’s easy to miss the nondescript yellow placard. Planted just beyond the creeping vines of a local agriturismo, it reads CITTA’ DEL DIARIO—the City of Diaries.

In most respects the town is a picture of Tuscan tranquility. Off the main street, a woman sells homemade pasta from her front door. In the summer months, the Tiber River is so languid it hardly gurgles. Seen from the outskirts of nearby Caprese Michelangelo, the birthplace of the famed virtuoso, Pieve Santo Stefano (population 3,156) appears as little more than a speck of butterscotch shingles in a sea of rolling green hills.

But if you listen closely, the quiet speaks volumes.

More than 8,000 diaries reside here—nearly three per capita—in the Archivio Diaristico Nazionale (ADN), or National Diary Archive. Many deal with war. Others with love, madness, adventure. Together, these journals—written by Italians from every province and profession—comprise one of the richest testaments to the Italian experience available anywhere in the world. And some 200 more arrive each year.

Yet the town’s peculiar claim to fame is rooted in tragedy. Seventy-five years ago—on August 5, 1944, roughly a year after the Mussolini regime had collapsed and the Nazis had occupied Italy—the townspeople of Pieve Santo Stefano were ripped from their beds under threat of death and marched north with whatever meager possessions they could carry. The town was promptly leveled.

“Referring to the town of [Pieve] S. Stefano … the only remaining building is a church in the center of the town,” read one of the first Allied reports to emerge from the region. “Apart from this, one may safely describe the town as a heap of rubble.”

Years later, even after Pieve’s hasty postwar reconstruction, many still spoke of it as un paese cancellato—a town erased. Concrete sidewalks had supplanted cobblestone side streets. Ticky-tacky facades leapt from the ruins of 16th-century portici. What had once been described as a singular jewel of Tuscan charm now felt uniform, sterile—a graveyard of memory in the cradle of the Renaissance. “My Pieve. My Pieve,” lamented a villager named Dante Crescioli, reflecting on the changing face of his hometown, “whose novelty is no more.”

Or so it was until the arrival of Saverio Tutino.

Born in Milan in 1923, less than a year after Mussolini’s rise to power, Tutino studied law before taking up arms as a member of the Italian Resistance in the mountains of Valle D’Aosta. After the war, he tramped the globe as a correspondent for l’Unità, the official newspaper of the Italian Communist Party (founded by the Marxist philosopher and politician Antonio Gramsci). For the next four decades Tutino wrote almost constantly, publishing half a dozen books in addition to his reporting. Yet by the 1980s, his focus was elsewhere.

Having grown up in a culture with one of the richest storytelling traditions in the world—but few institutions dedicated to the preservation of grassroots histories—Tutino found himself increasingly captivated by the stories of those relegated to the sidelines of Italian scholarship. These were the people who had experienced the country’s biggest upheavals firsthand but never had, in Tutino’s words, “un voce al capitolo”—“a say in the matter.”

Tutino envisioned a new kind of repository—one that collected and celebrated first-person testimonials by ordinary Italians, from all walks of life.

In September 1984, Tutino visited Pieve Santo Stefano for an art exhibition. It struck him as the perfect place for a “House of Memory.” Though the scope of the repository would be national, the proposal neatly dovetailed with the needs of a town still grappling with its own historical erasure.

Within a matter of weeks, then-Mayor Pietro Minelli approved the foundation of what would come to be known as the Archivio Diaristico Nazionale. Within a few years, word of the ADN spread through Italy and abroad, completely redefining Pieve Santo Stefano’s identity.

For some, Tutino’s arrival was the stuff of serendipity—a fortuitous coincidence of time and place. But others see more deliberate forces at work.

“Saverio Tutino was [not just] the founder but also the soul of the archive,” says Natalia Cangi, who now directs the ADN. “We like to think that [he] resolved to build the archive here as a sort of moral reparation for this place.”

Regardless of Tutino’s intentions, the ADN was an immediate media sensation, thanks in large part to a concurrent innovation of its founder: il Premio Pieve, or the Pieve Prize. Eager to incentivize donations to his fledgling institution, Tutino paired its foundation with the announcement of a cash prize—1,000 euros, or $1,332—for the “best” diary, memoir, or epistolary collection submitted each year, as judged by a rotating panel of Italian literary critics who evaluate each donation based on its genuinità originale, or “original authenticity.”

If these criteria seemed ambiguous, few seemed to care. Submissions poured in from across the peninsula. Within weeks of the Premio’s inception, the ADN received more than a hundred manuscript submissions. Some were directed to the prize committee, others to the archive.

They have never stopped arriving.

“Without the Premio,” says Cristina Cangi, who now manages contest submissions, “I doubt we would have received even half of what we have now.

The diaries come in various forms—letters, memoirs, autobiographies. They’re scribbled on paper, written longhand in journals, some even typewritten. Most are from the 20th century, though the earliest ones date to the 18th.

Today, visitors to Pieve have two options for perusing the town’s trove of autobiographical materials: the ADN and its offshoot—il Piccolo Museo del Diario (the Little Museum of Diaries). Since 2013, this public-facing part of the archive (located just across the main square) has exhibited the archive’s most spectacular holdings.

The entire four-room museum itself is tiny—roughly the size of a one-bedroom apartment. Yet its modest size belies the richness of its collection.

One room features a wall of wooden drawers, each containing a diary or written correspondence that’s narrated aloud, via pre-recorded voiceover, when a drawer is opened. Another pays homage to Vincenzo Rabito (1899–1981), an illiterate Sicilian road worker who, at age 69, resolved to spend the next seven years painstakingly typing a 1,027-page phonetic manuscript of his life.

Finally, in the last room, is one item widely regarded as the ultimate embodiment of Tutino’s vision. Known simply as Il Lenzuolo, or “The Bedsheet,” it hangs alone in the room, bathed in soft, yellow light behind a thin layer of protective glass. Save for three black-and-white photographs and a subtle border of faded pink ribbon, its face is a wall of dense, minuscule penmanship. It, too, is a diary.

As the story goes, its author—a semi-literate 72-year-old peasant named Clelia Marchi—was looking for a way to process the loss of her husband, whose sudden, accidental death continued to torment her 12 years after his passing. Finding herself out of paper one evening, she resolved to write her life story on the symbol of their union: their matrimonial bedsheet.

“I write my sadness at night, when I sleep little,” it reads, “[Because] I could not make use of this sheet with my husband any longer, I thought of putting it to use for writing.”

Elsewhere on the bedsheet, Marchia’s grief is even more palpable: “I feel empty, finished … I spend my days crying. I would never have thought that after 50 years of married life we would be separated like that.”

Many first-time viewers of Il Lenzuolo report feeling physically staggered, as much by its scale as by the intense personal bond it evinces. That reaction is precisely why Cristina Cangi has made this town, and its mission, her home.

“That is the magic of this place,” she says. “The chance to see the person behind the story—and through that process, to see your own.”

During WWII, American soldiers brought the flags home as a remembrance. Now, family members and historians must decide what should become of them.
cemeteries

But not for much longer.
nazis

Their culinary legacies, written on scraps of paper or fabric, tell stories of hope and resistance.
nazis

3:30
Want to see fewer ads? Become a Member.
From Around the Web
Atlas Obscura Trips
Culinary Naples: Producers, Purveyors, and Pizzaioli
View This Trip
Thanks for sharing!