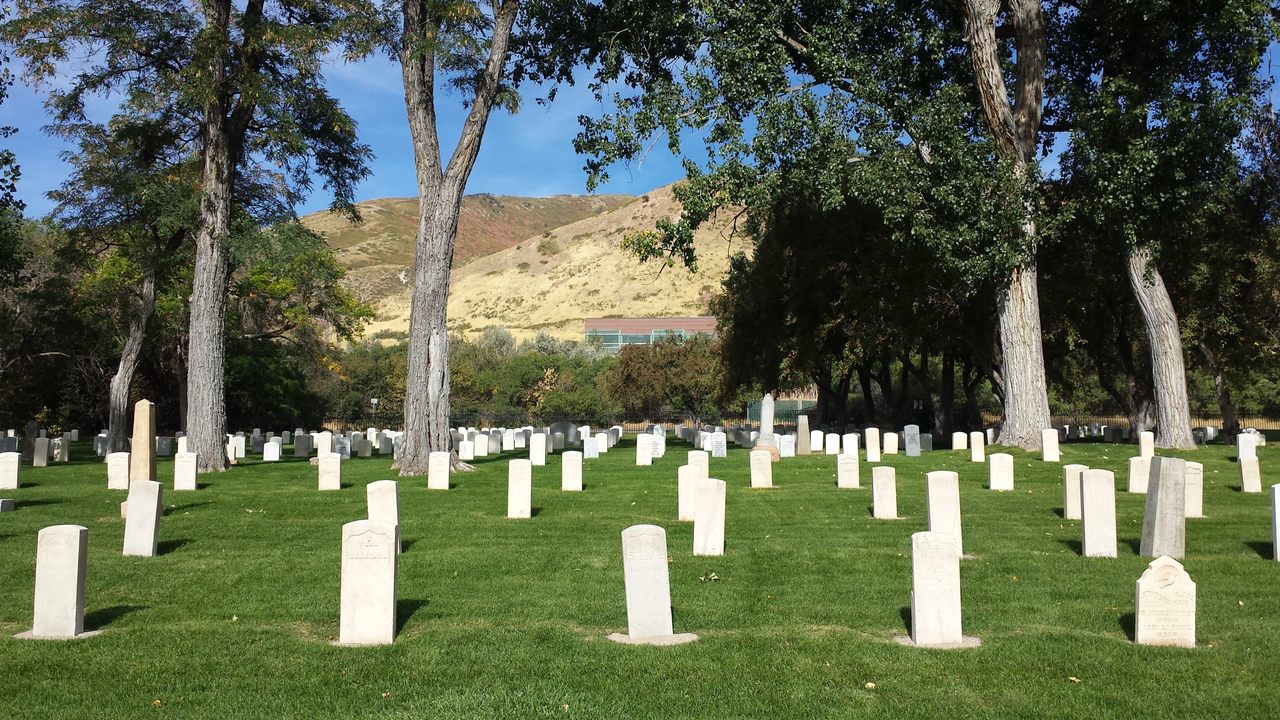 More than 1,300 veterans have been laid to rest in the Fort Douglas Post Cemetery in Salt Lake City since it was established in 1862. Each of these graves, of course, tells a story. But one of them, on its own, complicates the entire narrative.

The headstone belongs to Paul Eilert—a German prisoner of war who died in Utah in 1944. It is marked with more than the average epitaph. Eilert’s headstone, in an American military cemetery, is inscribed with a finely carved swastika. It’s small but unmistakable, and until recently, there were no plans whatsoever to address it, let alone remove it.

The Salt Lake Tribune reported that on Memorial Day 2020, four members of Congress wrote to Robert Wilkie, secretary of the Veterans Administration (VA), joining the growing calls to replace Eilert’s headstone, along with two others bearing the Nazi insignia in Texas. “Allowing these gravestones with symbols and messages of hatred, racism, intolerance, and genocide,” they wrote, “is especially offensive to all the veterans who risked, and often lost, their lives defending this country and our way of life.” The letter is signed by Representatives Nita Lowey (Democrat of New York), Debbie Wasserman Schultz (Democrat of Florida), and John Carter and Kay Granger, both Republicans of Texas. The other headstones they reference are in San Antonio, at Fort Sam Houston National Cemetery. Both include swastikas, and one elaborates further, “He died far from his home for the Führer, people and fatherland.” The swastika on Eilert’s headstone, moreover, is part of the design for the Iron Cross, which the Nazis had awarded him for distinguished service.

Some, including the University of Utah historian Robert A. Goldberg, have pointed out the parallels between these stones and Confederate monuments, some of which have been removed in the face of public pressure. Initially, however, the VA said that all three headstones would remain in place, under the guidance of the National Historic Preservation Act of 1966. The Military Times quoted VA spokesman Les’ Melnyk as saying that the Act “assigns stewardship responsibilities to federal agencies, including the VA and Army, to protect historic resources, including those that recognize divisive historical figures or events.” But sustained pressure led the VA to change course. The agency released a statement committing to “replace these headstones with historically accurate markers that do not include the Nazi swastika and German text.” In the statement, Secretary Wilkie said, “It is understandably upsetting for our Veterans and their families to see Nazi inscriptions near those who gave their lives for this nation. That’s why VA will initiate the process required to replace these POW headstones.”

Eric K. Ward, a Senior Fellow at the Southern Poverty Law Center (SPLC) and Executive Director of the Western States Center, applauds the VA’s reversal. On behalf of SPLC, he had lobbied vociferously for the stones’ removal. “Personally,” he says, “I wish that those headstones would be buried just as the ideology should be buried into the ground. These are symbols of a government and an ideology that murdered millions of people—civilians. And I don’t think that there is any room for them in public cemeteries where U.S. veterans are buried.” He suggests that molds could be taken if a museum is to preserve them.

For Ward, keeping the stones in place serves to normalize Nazi iconography and, by extension, ideology. Replacing the stones, he says, shows no disrespect towards the POWs themselves—it simply disavows the genocidal regime that had conscripted them. It’s one thing for German POWs to be buried in American military cemeteries, with gravestones marking their identities and dates of birth and death. It’s quite another, he says, for them to be “labeled with swastikas and make reference to the Führer, which is Adolf Hitler.” Removing the stones will not get in the way of educating people about this history, he adds, just as removing Confederate monuments does not make it harder to teach about slavery. Besides, says Ward, most were installed not to educate people, but “to reinforce Jim Crow segregation and the terror of racial violence.”

The historian Kent Powell, author of the book Splinters of a Nation: German Prisoners of War in Utah, says it’s difficult to compare the matter of three headstones with the abundance of Confederate monuments spread throughout parts of the United States. Ideally, he would’ve liked these headstones to remain in place—or at least under local, rather than federal supervision—for educational purposes. (At the same time, he’s surprised they haven’t already been vandalized.)

Powell’s research details the widely unknown history of the POW experience in the United States during World War II, a history these stones represent—perhaps uncomfortably so. Nineteen other German POWs are buried at Fort Douglas, their graves not marked by swastikas. Nine of them were killed in Salina, Utah, in what is known as the 1945 Salina Massacre, when an American soldier shot up the town’s POW camp. Powell says that Eilert’s stone is the only one to include a swastika because Eilert was the first German POW to die in Utah. The Geneva Convention did not regulate burial procedures for POWs, so the other Germans were allowed to fund the monument they desired.

For Powell, drawing attention to the stones is about more than bringing this history to the fore. It’s a warning for the future. The stones could be shown to students, he says, to help “interpret and to explain and help us prevent the rise of fascism that brought us the 20 dead Germans” at Fort Douglas, and “the millions of people all over the world.” It’s a rise, he adds, “that we see every day …”

Dwight D. Eisenhower and Marlene Dietrich both belonged to this unusual club.
tunnels

She's the only woman veteran honored with a monument at West Point. But where was she buried?
Video • Object of Intrigue