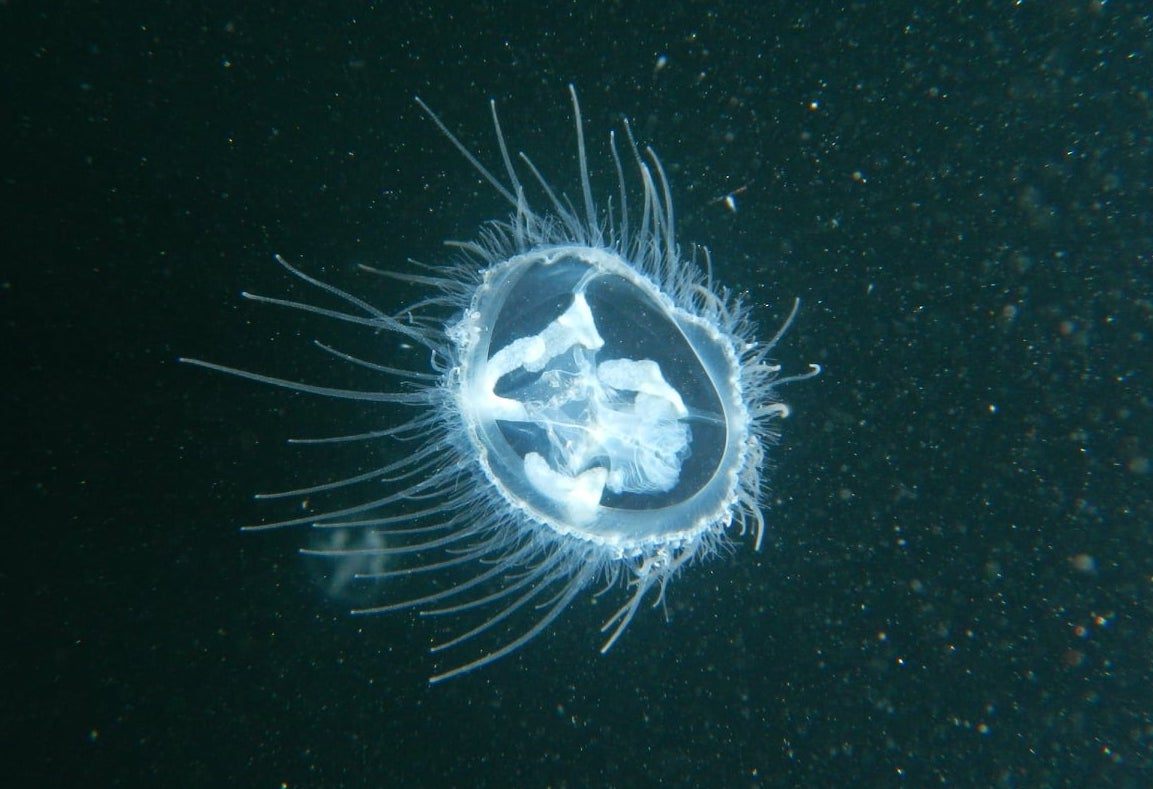 This freshwater jellyfish, Craspedacusta sowerbyi, photographed in Walden in 2020, can be as small as a penny. Courtesy Katherine Gogel
In This Story
Place

"the sweltering inhabitants of Charleston and New Orleans, of Madras and Bombay and Calcutta, drink at my well . . . The pure Walden water is mingled with the sacred water of the Ganges."
Destination Guide

Whatever solitude he sought in the woods of Concord, Massachusetts, writer and naturalist Henry David Thoreau was never really alone at Walden Pond. He had plenty of beaked, scaly, and leafy neighbors at the kettle pond—the state’s deepest natural puddle—and he chronicled his encounters with them in Walden: Or, Life in the Woods, his 1854 account of a stint in a humble cabin. Thoreau remarks on the fish—schools of small perch, flashing bronze in the greenish water, as well as pickerel and more, all “cleaner, handsomer, and firmer fleshed” than ones in other ponds and rivers he had known. He muses about the pond’s muskrats and minks, and counts up the birds—ducks and geese that blow in with the fall chill, ospreys scouting for fish, tree swallows with bellies white as clouds. He describes insects—water striders “furrow[ing]” the flat surface—and the resident frogs, turtles, and mollusks.

But he says nothing at all about jellyfish. Take a dip in the pond now, though, and you might find yourself surrounded by them.

I met some one evening last September. The setting sun was streaking the sky lilac and gold, and I was swimming from one side of the pond to another and back again. Halfway to shore, I noticed my companion’s feet had stopped fluttering. I turned my goggled gaze and saw him pointing down. He was entranced by something whitish and billowing. It was the size of a penny or maybe a nickel, and I figured it was a tuft from some seed pod. Then I kicked closer and saw several dozen trailing tentacles. The thing was alive and propelling itself through the water, and it wasn’t alone. A cluster of the jellies had gathered beneath us, in the middle of a pond once thought to be bottomless.

It’s likely that the jellies arrived after Thoreau did. This species, Craspedacusta sowerbyi, is native to China’s Yangtze River valley, and may have landed in the United States with imported fish or aquatic plants, or by hitching a ride on a bird (the jellies are resilient travelers). Since the 1880s, the jellyfish has been spotted in least 44 U.S. states. It seems to show up most often in placid ponds, quarries, or other pools of languid water, particularly ones dug by humans.

It’s impossible to say for certain exactly when or how they entered Walden Pond, because they’re pretty incognito for most of their life cycle. “Really, the only evidence to know they’re there is to find them in the adult stage,” says Chris Doller, supervisor of changing exhibits at Boston’s New England Aquarium. The grown jellies, with their dancing tentacles, have reached the part of their lives known as the medusa stage. That’s when they’re most detectable, but it doesn’t last long, Doller says—around a month or two, though it may appear to stretch longer when they reproduce in waves. As younger polyps, they’re “quite clear and really small,” Doller adds, and basically impossible to see. As scab-like podocysts, they can stay dormant on dry rocks, branches, or other surfaces for months or more until conditions are right. Wendy Fox, a spokesperson from the state’s Department of Natural Resources, which manages Walden Pond State Reservation, confirmed a C. sowerbyi sighting to the website Wicked Local in 2010, adding that this was the first the department had heard of jellies in the pond. “That doesn’t mean they haven’t been in the pond and we didn’t notice,” Fox added.

One 2020 sighting at the pond made it onto the United States Geological Survey’s Nonindigenous Aquatic Species database. Someone apparently spotted the jellies near a sandbar, between 50 and 150 feet offshore, suspended between three and 15 feet below the water’s surface.

That report classified the population as “established,” and it will probably remain that way: Once the jellies enter a waterway, they typically stay there. They have few natural predators, and while they need warm temperatures to bloom into medusas, the polyps and podocysts don’t require much hospitality; they can likely handle a New England winter, no problem. Because the jellies spend long spans of time basically invisible, evicting established populations is “virtually impossible,” Doller says. In places where saltwater jellyfish species interfere with fishing or get sucked into turbines, though, there’s major demand to do so. “I think if anybody could figure it out, they’d win a million bucks,” Doller says.

But he points out that, at Walden, the case for even attempting eradication is probably pretty weak. They’re able to sting, but can’t hurt humans. They eat zooplankton and other small creatures, but probably not so many that they’re cramping the lifestyle of local fish; writing in the Journal of Freshwater Ecology, fisheries researcher Dennis DeVries reported that C. sowerbyi appear to leave plenty of the of tiny drifters behind. “I don’t think they show up in such numbers that people should be worried about whether they’re stinging fish, eating eggs, eating insects,” Doller says.

When determining whether to pull out all the stops to wrangle and remove a non-native species, ecosystem managers typically consider three factors, says Ceci Weibert, an aquatic invasive species senior program specialist with the Great Lakes Commission. First, they assess whether the creature is harming the environment or dinging the economy. Next, they gauge population size and spread, to get a sense of whether its ranks are small or confined enough to feasibly be rounded up or taken out. Finally, they see whether they have the tools for the job—the right herbicide, pesticide, or mechanical process to get it done.

“Just because something is non-native, doesn’t mean it’s also going to be invasive,” Weibert says. According to a 2014 report from the National Oceanic and Atmospheric Administration, the Great Lakes house around 180 nonindigenous species, and fewer than a third of them, including the dreaded zebra mussel, have moderate-to-high environmental impacts. (The authors note that this could be an underestimate, though, since some species weren’t yet fully assessed.) Freshwater jellies scoot through that region, too, but the researchers don’t consider them a problem. They’re “just kind of living there and coexisting and causing relatively little impact,” Weibert says.

Doller says that there’s still a lot to learn about freshwater jellies, including the extent to which colonies expand, precisely how much food they consume, and whether we’re schlepping them from place to place. “It’s really hard to monitor and really hard to evaluate,” he says. “I don’t think enough is really known, but I don’t know that I would worry too much about them.”

Meanwhile, locals are pretty enchanted. “I love it when there’s really a cloud of jellyfish,” says Katherine Gogel, who has lived in the area on and off since 1968 and has visited the pond regularly since the 1990s, sometimes dropping by nearly every day. “It just makes me stop swimming. I hover there with them.” Gogel is transfixed by what she calls the jellies’ “pulse”—that gentle bunching and unfurling. Cookie Fisher-Martin, who lives in nearby Lincoln and has swam in the pond for around 20 years, first saw the jellies five or six years ago. Her brother pointed them out; she remembers him describing them as small, “like a little petal.” She has since spotted them in spring and fall, sometimes as tiny as the tip of her pinkie, sometimes the width of her thumb. Last year, she tried to scoop one into a plastic bag to take a closer look up on shore, but was foiled. “I really thought I had it in the bag, but when I got out, it was nowhere to be seen,” she says, laughing. “They’re like magicians.” Swimming alongside them can feel magical, too, in a way Thoreau might have appreciated. Paddling past large clusters, specks of white in the deep, dark blue, Fisher-Martin says, “you feel like you’re out in the stars.”

Dolphins Help Those Who've Helped Them Before, Even When They're Not Friends

A conservation biologist in Argentina once hosted one of the animals in her living room, but finding them in the wild has proven far more difficult.
Video • AO Docs