The Art and Science of Falling in Love With Joshua Trees - Atlas Obscura
Want to see fewer ads? Become a Member. 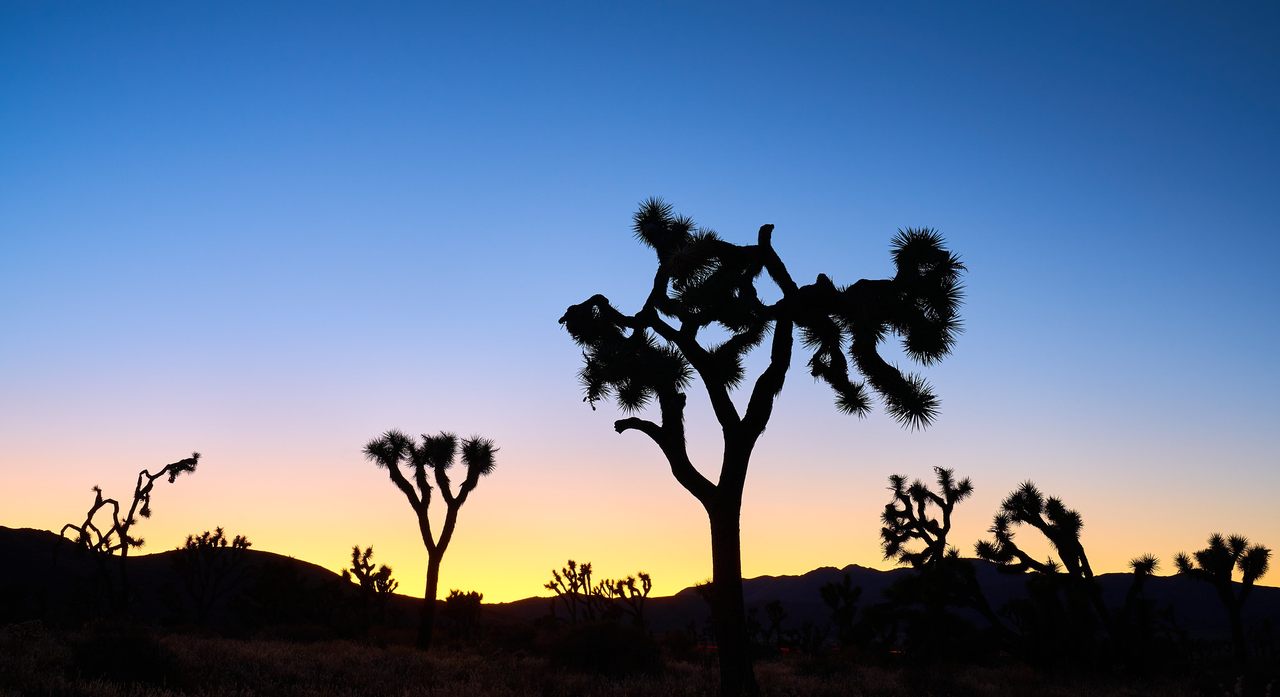 It's hard to picture Joshua Tree without its goofy namesakes, but they're in trouble. Pedro Szekely / CC By-SA 2.0
In This Story
Destination Guide

If you’re prone to anthropomorphizing the natural world, you’ll find a lot to love in Joshua Tree National Park. Introduce yourself to the shaggy trees that lend the park its name, and you might notice charming and distinct characters: You can imagine one talking with a baritone croak, maybe, and another in a high-pitched warble. The residents of this patch of California’s Mojave Desert are charismatic, like sedentary Muppets with root systems. It’s hard to imagine the fantastical, boulder-strewn landscape without big, goofy stands of them. But as the world warms, the trees are losing ground.

Researchers have consistently found that Joshua trees, or Yucca brevifolia, are struggling in a changing climate. For one thing, while adult trees can rely on stored water during triple-digit summer temperatures, seedlings aren’t surviving them, KQED reported. A temperature increase of 3° Celsius would curb the trees’ range by as much as 90 percent, according to the research ecologist Cameron Barrows. He has canvassed the park in search of refugia—higher, cooler spots where young trees might be able to hang on—but those aren’t a guaranteed lifeline. Joshua Tree is the southernmost edge of the plants’ range, and it’s getting too hot and too dry. The trees are often flanked by grasses that can go up in flames during wildfires, and the trees struggle to successfully spring back after burns. “It doesn’t look good for the trees,” says ecologist and artist Juniper Harrower.

Harrower, who grew up roughly 20 minutes from the park, wants people to fall in love with Joshua trees—and to get curious about interspecies relationships between the trees, moths, and underground fungi that might help keep them healthy. Harrower recently finished her PhD at the University of California, Santa Cruz, and has launched a collaborative digital project called “Hey JTree,” a science-communication effort inspired by dating apps.

Sixteen trees throughout the park get the Tinder treatment, with cute portraits, location information, and coy little profiles peppered with made-up names (say hi to Jerome, Eleanor, Shorty, and Marty) and real-world data, including the local temperature; soil moisture; tree height; elevation; number of seeds; and sightings of yucca moths, which pollinate the Joshua tree and lay their eggs in its blossoms. (Harrower performed much of this field work while pregnant or with her infant son in tow, with a truck and ladder borrowed from her parents, and her mom helping out as an assistant and lunch-packer.) Atlas Obscura talked to Harrower about the project, and what the trees are up against.

What threats are the trees facing in the park right now?

It’s an issue of reproducing, but also, the trees that are standing just getting too hot, too dry, and starting to lose limbs and collapse. When we think about climate change and how it impacts Joshua trees, you also have to think about all these other players: Joshua trees and yucca moths have tightly coevolved over millions of years, and you can’t have one without the other. If the moths are responding to climate in a certain way, and it takes out the moth sooner, that’s it for Joshua trees in terms of reproduction.

Why draw inspiration from dating apps?

As a biologist, I’m interested in all kinds of species, for all kinds of reasons. But Joshua trees—people love Joshua trees. It was a way I could get people to listen to what I’m saying. Visitation rates in the park have skyrocketed over the last 20 years, and especially the last 10 and five years, and part of that is driven by Instagram culture. Joshua Tree is so photogenic.

I grew up as a really young kid hanging out in the park, and I’m just seeing the explosion of phones out—lots of people, lots of phones in the air. So I thought, this is a way I can engage with phone culture. Also, it’s catchy. I’ve given talks before, and university students are sitting in the back with headphones on. As soon as I say “dating site,” headphones are popped off. All this stuff is really heavy, so here’s a way that we can be playful with it but still have some important conversations.

How did you settle on these specific trees to profile?

I look at it across a climate gradient. Across the park, landscapes, ecosystems, temperature, and rainfall patterns vary dramatically. At the highest sites, you get snow every year. Out of the park, and even in the park at the highest elevation sites, it’s really cold and windy. As you start to go down in elevation, it changes. There are areas in a little valleys that are protected, then places that might be exposed to certain cold wind patterns. You definitely get microclimates.

When I was thinking about what trees I wanted to include in this project, I really wanted to make sure that they were accessible to people. I didn’t want people to have to be, like, tromping through cryptobiotic crusts, these amazing ancient soils that have all of this life. When you step on them, that destroys it. So I picked trees that were close to parking lots and could be accessible to people with disabilities, or really close to trails. I picked trees that looked like they had different personalities. I’ve always been really intrigued by the form an organism takes, and how it’s responding to environmental conditions and also genetic cues.

Do the trees seem to have a sweet spot in the park?

Across all of the measurements that I looked at, there was this one happy area where trees were really big and large, there were lots of them, they were reproducing, there were lots of moths. Things were just looking good. That was really interesting to see, like, “Oh yeah, everybody’s kind of happy around this mid-level elevation.” There’s a good example on out on the Cap Rock Trail, a little loop.

Joshua trees need really specific patterns to be able to thrive and flower. If you don’t flower, you don’t set seed, and you don’t have the next generation of Joshua trees. They need a cold snap to get the plant to flower, and they also need enough water. The precipitation pattern needs to bring them enough water to survive through the years. I mean, it’s a desert plant; it’s evolved to be able to take a little bit of hardship.

Assuming someone does not literally go out and woo a tree, what are you aiming to accomplish?

You’ll hear scientists say, “I don’t really want to get political because we want to keep science separate from politics, to preserve its dignity or believability.” Over time, I realized we don’t have the luxury of not being political anymore. I firmly believe you can do really solid science, and when people understand how the science process works, you can recognize good science from bad science—and it’s peer-reviewed and held to high standards. And you can also be really politically outspoken and say, “We can’t continue to consume at the levels we’re consuming.” People need to understand that there’s value in our natural world outside of just, “extract all the resources you can get from it and then make as much money to buy a bunch of stuff that’s gonna destroy our environment and us.”

Do you remember the first time you saw a Joshua tree? Was it love at first sight?

I was born in the Palm Springs area, and we moved up to the High Desert when I was six or seven. We lived on five acres, down a bumpy dirt road. There are very, very few Joshua trees in this area because the elevation is too low, but we had one in the backyard, and it was totally weird. It was really special to us. My dad is a landscape architect, and so we always thought about our plant friends in the area.

I was the oldest of four kids—four kids, and lots of dogs. Every time one of our dogs would pass away, we would bury it under the Joshua tree. It became this kind of mythological place in the backyard. I think at this point there are like seven dog skeletons underneath the giant tree. I always kind of fantasize about doing a painting of what it looks like underground. Roots seek out nitrogen and carbon, so I’m sure that the roots wind along dog spines and rib cages. It’s probably really macabre, but it’s incredibly beautiful to imagine the symbiosis.

In Nome, Alaska, Santa Is a Gravedigger Named Paul

With a little help from scientists, an oak in the Harvard Forest is sharing updates about its life.
forests