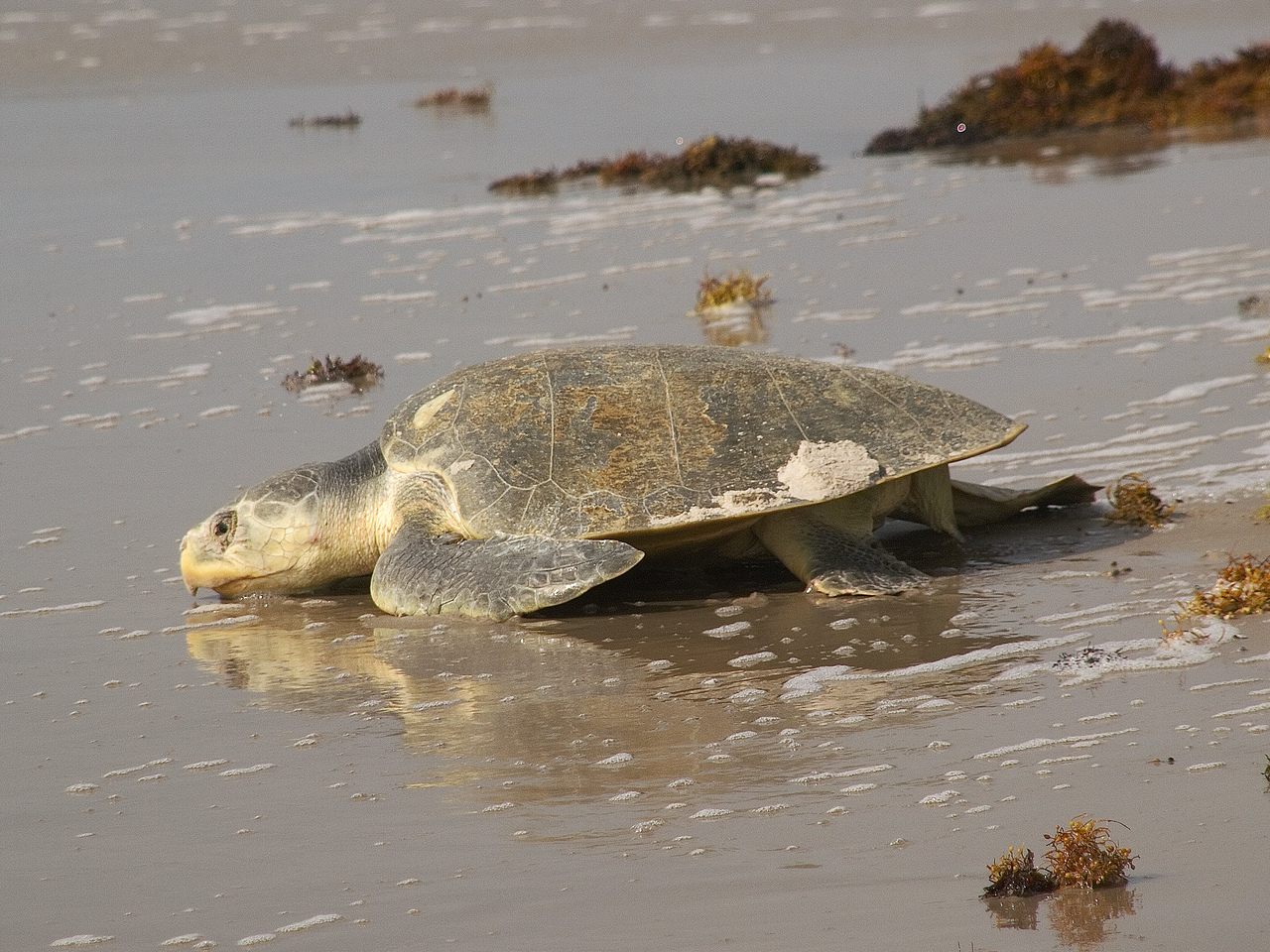 Cape Cod, the famous summer haven for New England vacationers, is also an infamous death trap for some of the world’s smallest and most endangered sea turtles. Kemp’s ridley sea turtles spend their summers foraging along the coast, before they migrate south to warmer waters. But the turtles often become trapped in Cape Cod’s treacherous hook, and wind up stranded on beaches. “Suddenly the cold comes, and they get stunned and can’t swim,” says James Manning, an oceanographer with the National Oceanic and Atmospheric Administration. Manning is co-author of a new study on the turtle strandings, published December 4 in PLOS One.

The endangered Kemp’s ridley sea turtles have been in trouble for decades, overharvested by humans and often caught in shrimp trawls. In 1947, more than 40,000 nesting females were recorded during a Kemp’s ridley arribada, or mass nesting event. In 1985, the same population produced just 702 nests, according to a U.S. Fish & Wildlife Service recovery plan. The turtle population living by Cape Cod has become uniquely imperiled: Warming waters encourage them to linger longer in the north—and then cold weather comes. In the fall of 2014, approximately 1,200 sea turtles, almost all of them Kemp’s ridley turtles, were stranded on the beaches of Cape Cod Bay—a new record. Scientists knew that sea turtles get stranded most often when cold waters make them inactive and helpless against currents, Manning says. But they weren’t quite sure what temperatures triggered this shock, and which region of the bay the turtles were coming from.

Manning, who is not a biologist, never set out to study sea turtles. He researches oceanic currents using satellite-tagged instruments called drifters, which can be tracked as they move through the bay. Consisting of a metal frame and four fabric sails, the instruments operate like weather balloons, sending back measurements such as temperature and location. Manning first launched drifters in the early 1990s, to understand how lobster larvae moved around in their first few weeks of life. “Where do they go, and where do they end up?” he says. “All these questions can be answered with drifters.”

These same questions applied to the mystery of the stranded Kemp’s ridley sea turtles. Manning had dozens of drifters dispatched in Cape Cod Bay, carried out to sea by approximately 50 different lobsterman, commercial trout fisherman, or whale-watchers. “Fishermen are always interested because it’s their ocean, and they want to know where the water goes,” Manning says. Almost all of the drifters ended up stranded on shore, and provided valuable data on their routes. One is still going: “It’s now approaching the Gulf Stream, heading off the Carolinas.”

In New England, drifters don’t look like ordinary oceanographic equipment. The trackers are crafted in high school classrooms, built according to scientific standards and decorated according to each classroom’s vision. “It’s funny what they come up with,” Manning says. “Sometimes it’s turtles, and sometimes it’s cartoon characters.” Manning’s favorite drifter in recent memory sported a detailed painting of a mermaid. He recently learned he wasn’t alone in his appreciation. “That drifter was found by a fisherman who liked it so much that he took it out of the water and took it home,” he says. (It had already served its purpose by the time of its rescue.)

According to Manning, the study’s most significant finding is that Kemp’s ridley sea turtles are more likely to strand when water temperatures drop below 50.9 degrees Fahrenheit. But he’s careful to stress that many facts of the turtle’s behavior around Cape Cod remain a mystery. For example, researchers aren’t sure if Kemp’s ridley turtles spend most of their time at the surface or submerged in the midwater, hundreds of feet below, where the currents are less affected by wind. The researchers are still split on the best way to answer this question. “We’ve considered divers, but the turtles are very little and it’s hard to find them,” Manning says.

Recently, researcher Felicia Page at the University of Rhode Island has been launching several new kinds of drifters, designed to imitate turtles at a number of depths. This past fall, Page launched the typical drifters painted by local students along with miniature sailboats, tiny wooden turtles the size of Kemp’s ridleys, and her own newfangled invention, a drifter with a weighted turtle attached to a retractable tether, mimicking how sea turtles might swim in midwater. “There’s still so much uncertainty about these turtles,” Manning says. “This will always be an ongoing study.”

All you need is a dream, investors with deep pockets, and concrete. A lot of concrete.
Video • Object of Intrigue