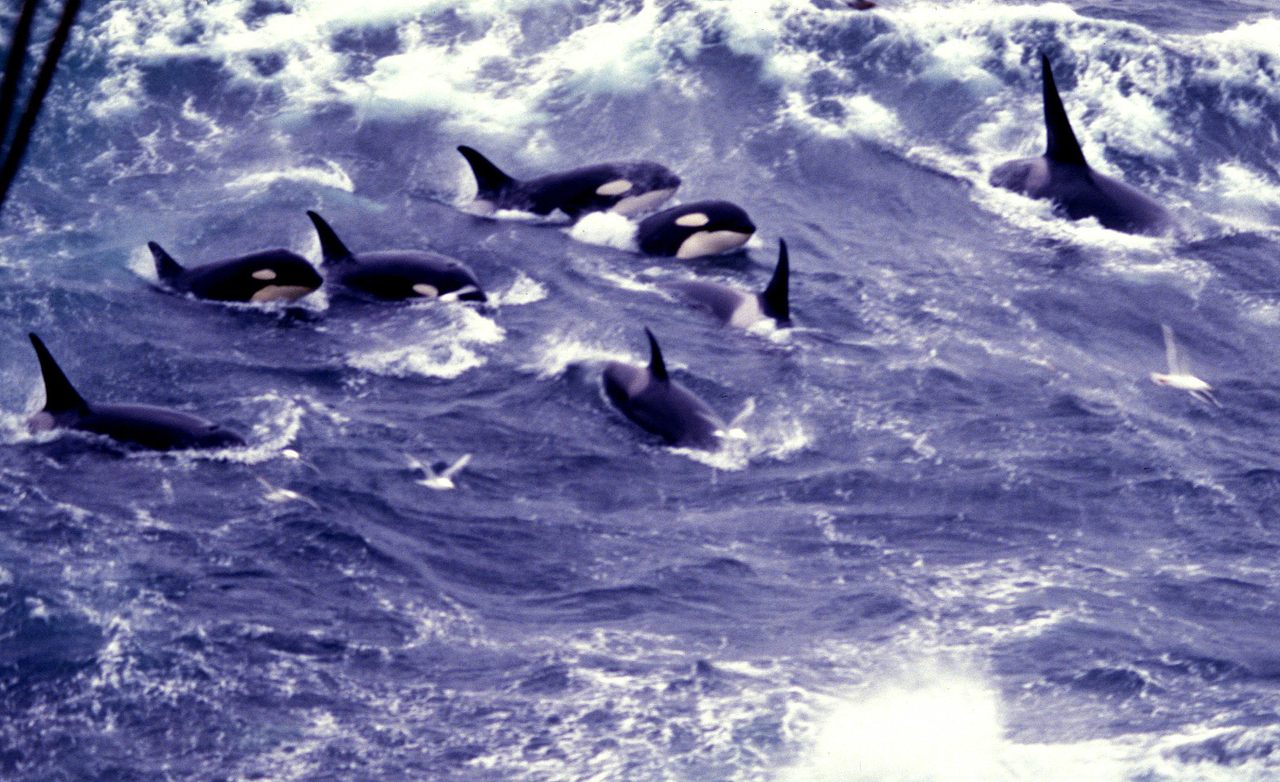 Fads—like, for instance, wearing a dead salmon as a hat—can spread within a trendsetter's pod and to other pods the group interacts with. Allen Shimada NOAA/NMFS/OST/AMD / Public domain via Wikimedia Commons

They come when a boat is quiet, the posse of adolescent orca whales looking to rumble. Finding the propeller still, they crash into it like semi trucks, each animal a monochromatic, five-ton torpedo on a mission of destruction.

Although killer whales are often observed interacting with boats, sea life, and ocean detritus there’s no clear explanation why gangs of young males suddenly began ramming boats around Portugal, Spain, and France this summer. Since July, they’ve sunk or damaged at least three. Researchers believe the behavior may be a temporary cultural fad—the cetacean equivalent of the ice bucket challenge or rickrolling—and it’s not the first killer whale trend to go viral.

Orcas, like other whale and dolphin species, have culture, behaviors that are socially shared and learned within a population. Some are transmitted from older generations to younger ones. Others are shared “horizontally,” between members of the same age group.

Most often, when a new behavior ripples through a community, it has a clear purpose: it’s a new route to a fishing ground or a way to opportunistically exploit human activity. But temporary cultural fads often have no obvious utility. When the behavior’s novelty is gone, the fad dies out as quickly as it appeared. “They’re curious animals and I think they’re just engaging with their environment,” says Deborah Giles, science and research director at the nonprofit, Wild Orca.

Scientists hypothesize that the orcas that are battering European boat rudders aren’t doing it out of malice. Instead, they probably like the feel of water rushing through a propeller. When the rudder is not moving, they slam into it out of frustration. Like other killer whale cultural fads that don’t have any real benefit to the group, the behavior will probably die out quickly, says Hannah Myers, a Ph.D. student at the University of Alaska Fairbanks researching killer whales in the northern Gulf of Alaska.

That’s exactly what happened in 1987 when a female in the Pacific Northwest’s Puget Sound was spotted wearing a dead salmon draped over her nose. The fad didn’t just spread within the trendsetter’s pod (her maternal family group). Over the next six weeks, individuals within all three pods in the area—collectively known as the Southern Residents—were observed sporting veils of decaying salmon. Then, just as suddenly as it began, the fish went out of fashion. More than 30 years later, researchers still aren’t sure why it caught on in the first place.

Short-term cultural fads can sweep through populations that interact regularly but there’s no evidence yet that they are transmitted to unrelated clans they pass on their migration routes. Because ecosystems differ from region to region, each population has its own set of cultural responses to the environment around them.

Adolescents and adult females typically initiate or participate in new behaviors, like one Giles is studying in and around the Salish Sea, the harassment and killing of porpoises. “They do not eat the porpoise, they just kind of play with them to death,” she explains. The behavior, which began in one family group then spread through the whole Southern Resident community, has been documented since the 1970s but has become increasingly frequent with no obvious explanation.

Among the longer-term cultural behaviors developed by killer whales are those that facilitate communication. The unique dialects “spoken” by different orca populations are a prime example, says Myers

“Here in the North Pacific, fish-eating killer whale pods share a unique set of calls [that] are passed down from mother to offspring and remain the same over generations of whales,” she explains. “We often consider killer whale mothers and grandmothers to be repositories of ecological knowledge.”

In addition to using their own distinct calls, the Southern Residents engage in at least two other cultural behaviors not found in other communities. One, “kelping,” is when a mother orca leaves her calf to roll around in patches of kelp while they forage nearby. (They probably do it “because it feels good,” hypothesizes Giles.) Another, an elaborate greeting ceremony, takes place when two pods come together after a long absence. For several minutes, the two groups line up fin-to-fin and face-off silently before rushing together in a tornado of social behavior.

Meanwhile, in the Johnstone Strait north of Vancouver Island, Northern Residents visit a “rubbing beach” where they go to brush their enormous bodies against pebbles beneath the water’s surface. Although they live in close proximity to other killer whale populations, the Northern Residents are believed to be the only ones that practice the behavior in the region. More recently, juvenile males around British Columbia have taken to playing with prawn and crab traps. Researchers don’t yet know if that too will become an entrenched cultural behavior, or if it will fade away like the salmon-style of the late ‘80s.

“These are individuals, and every animal has its own personality,” says Giles. “We’re just barely cracking the surface about our understanding about their behavior.”

The apex predators mean a great deal both ecologically and culturally.
science

In Argentina, aerial imagery helps researchers get a close look at southern right whales from a distance.
natural history museums

We watched it with a whale anatomist to see if the cetacean science holds water.
science

Marine biologists are engineering creative new ways to ride along with whales, bob with jellies, and drift with plankton.
Video