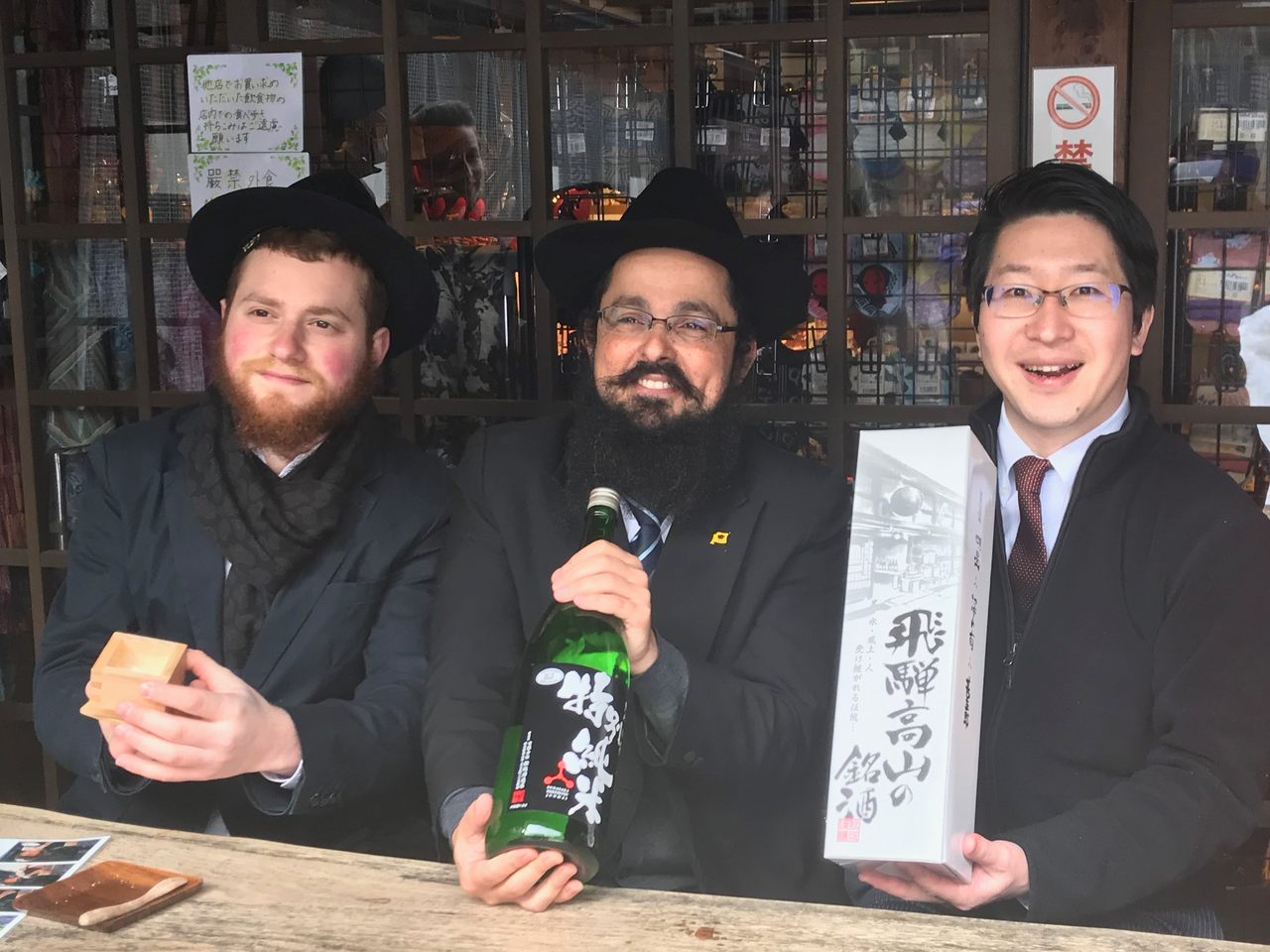 Tucked within the mountains of Japan’s Gifu prefecture, in the middle of Takayama, lies Funasaka Sake Brewery. With its dark-wood walls and stacked sake barrels, it looks typical. But inside is a surprise: Funasaka sells top-notch kosher sake.

Less than one percent of the Japanese population identifies as Jewish, but according to Hiroki Arisu, the brewery’s 35-year-old president and CEO, the land-locked prefecture welcomes more than 10,000 Israeli travelers annually—an impressive number given Takayama is home to fewer than 90,000 residents.

So why do so many Israelis visit the modestly sized city, and in numbers great enough to inspire a local brewery to navigate Judaism’s famously complicated dietary laws? The roots of the influx go back to World War II, when Chiune Sugihara, a local of Gifu, took action in a way that earned him, in 1985, just before his death at age 86, the honorific “Righteous Among the Nations” from the state of Israel.

In 1939, Sugihara arrived in Lithuania as vice-consulate for the Japanese Empire, a position he held as Hitler gained power in Germany and throughout World War II, when Jews began desperately fleeing Nazi rule. Sugihara helped thousands escape by issuing “Visas for Life,” transit documents that allowed them to travel through Japanese territories while rushing away from Poland and surrounding areas occupied by the Germans. In contrast, many countries and officials were reluctant or unwilling to help or offer refuge to Jews. In 1939, for example, the United States denied entry to the German ocean liner SS St. Louis, which had to return to Europe, where many of the passengers ultimately died in the Holocaust.*

According to the Times of Israel, Sugihara issued more than 2,000 visas. He is often referred to as the Schindler of Japan—a reference to another non-Jew who saved more than a thousand lives by employing Jews in his ammunition factory in occupied Poland—and is now responsible for the existence of the estimated 100,000 descendants of Jews who fled thanks to his transit documents. As of 2021, Sugihara remains the only Japanese national to have been bestowed the “Righteous Among the Nations” title by Israel.

In 2000, the Japanese government opened the Chiune Sugihara Memorial Hall in the diplomat’s hometown of Yaotsu, about two hours from Takayama. Inside, an exhibition room documents the history of Jewish persecution while also profiling refugees who escaped with Sugihara’s assistance, alongside messages of gratitude for Sugihara. The opening spurred the boom of visitors from Israel, and eventually a “trail” of local tourist stops that memorialize Sugihara, including the Port of Humanity Museum, where Jews issued “Visas for Life” disembarked, and Sugihara’s grave.

“I am proud of being Japanese like Sugihara,” says Arisu of developing a kosher sake line to cater to the Jewish tourists. “I was impressed to hear about his courage during World War II and, given the number of Israeli tourists, I hope that getting a kosher certification will allow many of them to enjoy [one of the things that Japan is known for].”

To obtain the kashrut certificate, Arisu contacted the Chief Rabbi of Japan, Binyomin Y. Edery. He also directs Kosher Japan, one of the local organizations with the religious authority to bestow kosher certificates following a series of compliance checks.

“The hardest part for Arisu was to understand that someone has to come in and check the sake-making process every month,” explains the rabbi, who visits the brewery more than 20 times a year. “The process to make kosher sake is simple, but to convince the Japanese to be open about it and explain every step of the way—from the polishing of the rice to the final product—is hard.” Most Japanese regulations review the final product, but, as Rabbi Edery explained to Arisu, kosher certification requires oversight of the entire process.

In 2018, Funasaka secured a kosher certificate for the brewery’s 60-proof junmai, a pure-rice sake, and has produced an average of 6,000 bottles a year since. Israeli visitors are now a regular sight at the brewery, often stopping in during organized tours whose itineraries include Tokyo, Kyoto, and Gifu’s trail of Chiune Sugihara sites.

Other businesses in the region have, like Arisu, gotten kosher certifications to serve Jewish Israeli tourists, and Funasaka’s is not the only kosher sake. Almost two decades ago, Rabbi Edery worked with Kazuhiro Sakurai, the president of Asahi Shuzo, a sake brewery in Yamaguchi, to create a kosher sake. During their collaboration, the duo uncovered many similarities between the Jewish and Japanese worldview. “Sakurai told me I changed his life by talking to him about the Torah, and he wrote a book about it,” recalls Edery. That book, in fact, inspired Arisu’s kosher efforts.

According to the rabbi, this connection makes Funasaka’s kosher certification about more than allowing tourists to enjoy a national drink. Ritual sake drinking is often associated with religious ceremonies and celebrations that mark commitments and the importance of congregating—all defining aspects of Judaism as well.

“The Japanese like to drink together. You won’t find a local drinking alone at a table at a bar,” says Edery. “Us Jews, when we drink, we say “lehaym,” which means “to life!” Because we don’t just drink to get drunk but to build a life together.”

*Correction: This article previously stated that the SS St. Louis had to return to Germany. In fact, it returned to the Belgian port of Antwerp.

Meet the Woman Who Trekked a 1,200-Mile Ice Age Trail in the Dead of Winter

In the Arizona desert, Atsuo Sakurai found the freedom to make something great.
breweries

Pushed out of brewing more than a century ago, they're making a comeback.
food

How Coconut Macaroons Earned a Place on the Passover Table