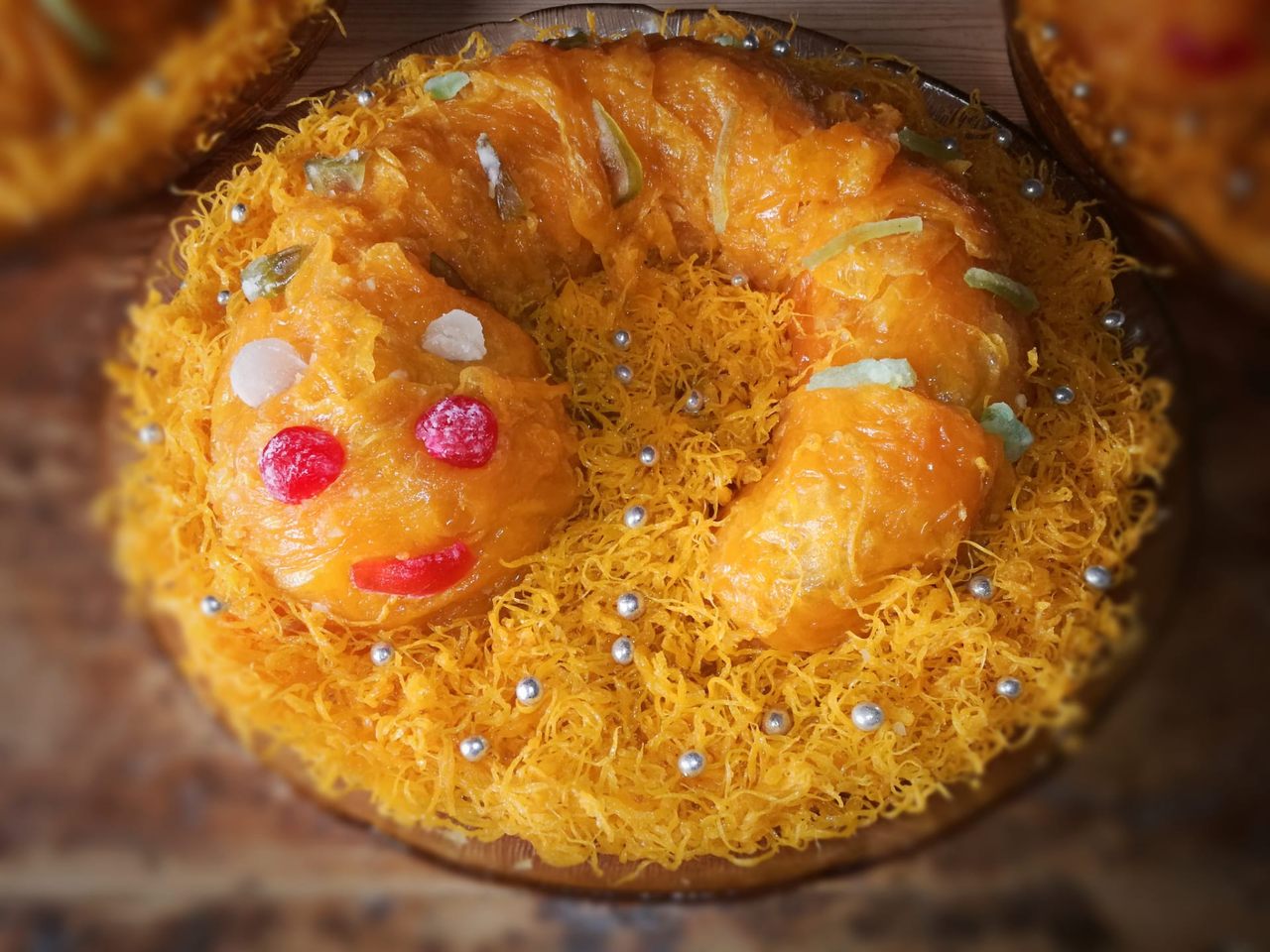 So sweet and adorable, you almost forget it's based on an ancient bloodsucking sea creature. Courtesy of Luísa Garrido
In This Story
Destination Guide

Many families in Portugal celebrate Christmas around a table filled with cakes, biscuits, dried fruit, and good wine. Among the treats, they will likely have bolo rei, a crown-shaped cake decorated with crystallized fruit; sonhos, orbs of crispy-yet-airy fried dough; and rabanadas, a Portuguese version of french toast covered with sugar and cinnamon. In some regions, another treat will appear: a curved, eel-shaped mound of egg yolks, sugar syrup, and almonds that will stare at diners with candied-fruit eyes and a big smile. This is lampreia de ovos, a dessert that glorifies a 360-million-year-old sea monster.

Lampreys are parasitic fish with long, scaleless bodies and gaping mouths that contain multiple rows of teeth, which they use to guzzle the blood of their hosts. While this might not sound appetizing, the lamprey has long been regarded in Portugal (and much of Europe) as a culinary delicacy. More than 2,000 years ago, the Lusitani and Romans both consumed lamprey, and Apicius’s De Re Coquinaria, the oldest known cookbook, mentions preparations for the fish.

During the Middle Ages, the lamprey reemerged as a prestige food. A rare, seasonal fish that was geographically restricted to the rivers where it came to reproduce, the lamprey’s limited availability made it a symbol of status and power. The wealthy impressed their guests by serving elaborate lamprey pies, stews, galantines, and blood sauces, especially as a replacement for meat during Lent.

Such feasting was “an endowment of the rich, the enlightened, and the noble,” according to Mário Varela Gomes, author of the book Divine Lamprey. Since lamprey was high-status food, it was considered improper for serfs to consume it. In 1423, Portuguese King João I took this exclusivity to the extreme, establishing the death penalty for anyone who was caught fishing for lamprey without permission.

Considering the lamprey’s revered culinary status in Portugal, “it is no wonder, then, that someone had the idea to turn such a prized item into a dessert,” says Professor João Pedro Gomes. A historian from Universidade de Coimbra who researches the history of sweets in Portugal, Gomes says it’s hard to pinpoint when, exactly, lampreia de ovos originated. However, he does point to the rise of animal-shaped sweets (such as ornate sugar sculptures) during the Renaissance as the possible roots of a lamprey-shaped treat.

Another chronological clue: The essential culinary techniques used to make lampreia de ovos were developed during the 1600s. “We have registries of the basic egg manipulation techniques used in this sweet in a cookbook from the late 17th century,” Gomes says. The elementary components of lampreia are capas de ovos, sheets of egg yolk cooked in sugar syrup and rolled around a filling. It is not clear precisely when or where a chef decided to shape these sheets into a lamprey form, but some historians hypothesize that it likely occurred in Central Portugal (such as Coimbra, Chamusca, or Tentúgal), where lampreia de ovos is commonly found today.

The earliest known recipe for lampreia de ovos comes from a 1903 cookbook. But references to the treat date back earlier, including a mention in the 1878 novel O Primo Basílio and an appearance in a rather elegant painting from 1884. When instructions for assembling for lampreia de ovos appeared in Tratado Completo de Cozinha e de Copa in 1903, its recipe consisted of a paste of almond and sugar, capas de ovos, and, as the eyes and mouth, raisins and red jam.

Luísa Garrido is part of a family who has been making lampreias de ovos for five generations in Chamusca, one of the towns where the dessert might have originated. The family uses a recipe from Garrido’s great-great grandmother, Ana Cuca. Garrido says her great-great grandmother likely learned the recipe from nuns who made the sweet inside their convent and sold it as a means of fundraising.

Even when Garrido was a young girl, only the upper classes could afford such an elaborate dessert (lampreia de ovos requires at least two dozen eggs and takes about a day to make). “I still remember my great-grandmother assembling it,” says Garrido. “She was a widow, and became a cook and sweet maker in order to support her family; she used to bake lampreia de ovos for wealthy families on special occasions.” In Chamusca, some sweet-makers produced lampreia not only for Christmas and other festivities, but also as a means of paying for house-calls from the doctor.

After 1986, the year in which Portugal joined the European Union, the general population’s living standards gradually began to improve. “Once the people started having more economic power, they started to emulate the behavior of the higher classes, and also their gastronomic traditions,” explains Gomes. Their Christmas tables, too, became more luxurious, with lampreia de ovos becoming a more widespread tradition.

As lampreia de ovos became more widespread, small confectioners like Garrido found themselves competing with mass-produced versions made by larger companies. Garrido admits that her lampreia is more expensive (25–30€ per kilogram) than most varieties sold in supermarkets, but she says its high price is determined by the amount of time needed to prepare it. “The full process takes around 24 hours to complete,” she says.

Even if it is such a laborious process, Garrido refuses to resort to any shortcuts that might compromise the quality of the sweet. To her, time and love are the key ingredients. Her clientele values this dedication as well. “The taste is totally different from the industrial version,” says Carolina Laurentino, one of Garrido’s customers. “Even if its price is quite higher when compared with the supermarket one, it is definitely worth every single penny.”

How to Make Lampreia de Ovos

1. Combine the egg yolks in a medium bowl and stir gently with a wooden spoon. Do not beat.

2. Strain the eggs through a sieve, making sure to remove any white threads and “eyes.” Gently stir the yolks in a sieve to press them through. Add the egg white and stir gently.

3. Pour the yolks into a piping bag. If you don’t have a piping bag, use two separate Ziploc bags, and seal.

4. Mix the sugar and water in a medium saucepan. Slowly bring the mixture to a boil. When the mixture starts to bubble, check the temperature; it should reach about 220°F. This is what’s known as the “thread stage” in candy-making because it’s when something dropped into the syrup should form threads. If you don’t have a thermometer, drop some of the yolk mixture inside to see if it does this. When it does, it’s ready.

5. Grab the piping bag. If you’re using a plain Ziploc bag, you’ll want to twist it to mimic a piping bag and poke a small hole in the bottom where it forms a point. Drizzle the yolk mixture into the syrup in sweeping circular motions. Pour as much of the mixture into the syrup as you can, making several rounds of yolk threads. Stop before it starts to bunch up. Cook for about one minute, then flip over and cook for another minute. Remove with a slotted spoon and place on a plate. Drizzle with cold water to prevent the strands from sticking. Repeat with the yolks from both bags.

6. Use immediately, or refrigerate and use the egg threads within a few days.

2. Pass the egg yolks and egg white through a sieve.

4. Cook the yolks for about a minute, then turn over to cook the other side. Set the egg sheet aside to cool, then repeat with the rest of the mixture. Be sure to make capas of slightly different sizes since you’ll want a larger head and a tapering at the tail. The mixture should yield about 6 capas de ovos.

1. Make a sugar syrup by combining the sugar and water in a saucepan, and heat the mixture to the thread point. Set aside to cool.

2. Pass the egg yolks through a sieve.

3. Mix the almond powder into the syrup, then add to the yolks and whisk.

4. Pour the mixture back into the saucepan, slowly bring to medium to medium-high heat, stirring constantly to make sure the mixture doesn’t stick to the bottom of the pan. (If you’re concerned the eggs will curdle, add about a tablespoon of corn starch.) When it’s developed a thick consistency, pour into a bowl and set aside to cool.

5. Once the mixture has cooled, form the mass into the shape of a lamprey on a new plate.

From pickles on the tree to live carp in the bathtub.
food

Not a gummy bear was spared during the Great Borough Bake-Off.
Video • Object of Intrigue

The history of drinking is told through 1,800 cups, chalices, and glasses at this exhibit.
São Miguel, Portugal

Ring the bell to enter a bar that looks equal parts museum and old curiosity shop.
Want to see fewer ads? Become a Member.
From Around the Web
Atlas Obscura Trips
Lisbon: Tracing the Roots of an Imperial Cuisine
View This Trip
Thanks for sharing!