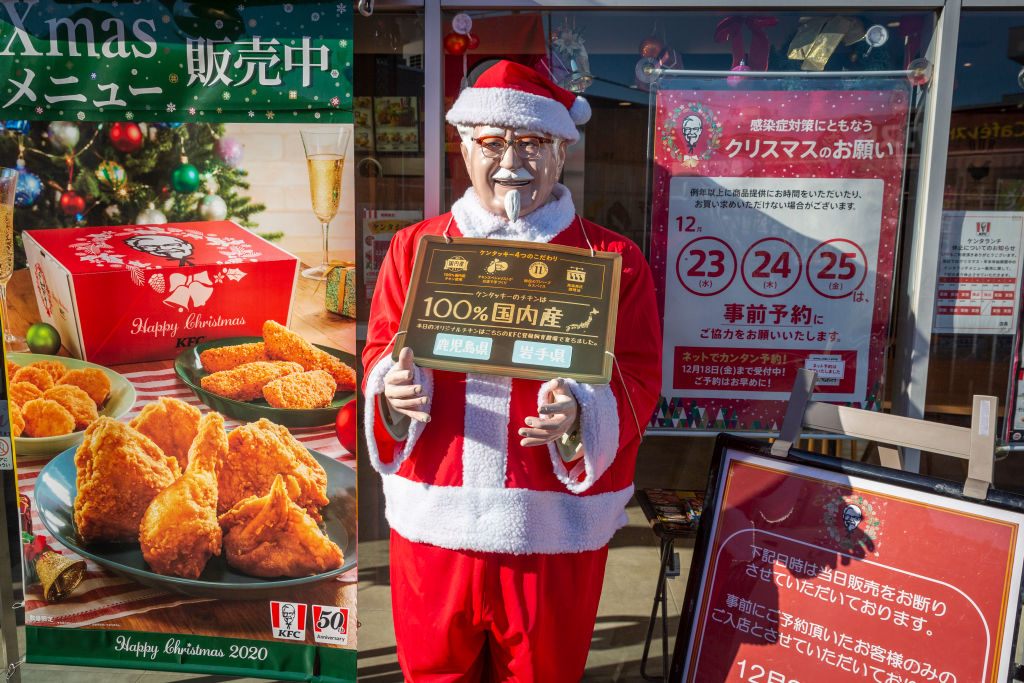 THIS ARTICLE IS ADAPTED FROM THE DECEMBER 17, 2022, EDITION OF GASTRO OBSCURA’S FAVORITE THINGS NEWSLETTER. YOU CAN SIGN UP HERE.

Wherever Christmas is celebrated, special food is always on the menu.

In the Netherlands, children look forward to receiving chocolate letters for their initials on Sinterklaas Day, while in Portugal, Christmas means lampreia de ovos, a sugary likeness of a blood-sucking eel-like parasite.

Globalization may have spread some of these customs beyond their original borders—you’re now just as likely to find a festive German Baumkuchen, or “tree cake,” in a Tokyo department store as at a Bavarian Christmas market—but certain ones are still very much rooted in a specific place. Here are just a few of the ones we love here at Gastro Obscura.

Every year, some 3.6 million Japanese families celebrate Christmas with fried chicken, courtesy of Colonel Sanders. KFC has become such a big deal in Japan that Christmas accounts for roughly a third of the franchise’s annual sales there.

While “Kentucky for Christmas” may be a beloved tradition these days, it most likely started with a bit of corporate deception. For years, English-language media propagated the story that expat families in Japan started ordering KFC’s chicken as a substitute for turkey.

This is one case in which the truth is way more interesting than fiction. In the 1970s, Takeshi Okawara, the hard-hustling entrepreneur who brought the fast-food chain to Japan, was struggling to get the failing business off the ground.

He had a breakthrough one day when he dressed up as Santa-san for a local kindergarten. Instead of simply handing out the chicken, “I started dancing, holding the barrel of chicken. ‘Kentucky Christmas, Kentucky Christmas, Happy Happy,’ like that,” he said during a podcast interview. “Kids liked it.”

Okawara later sheepishly admitted that he fibbed when asked if chicken was truly the Christmas food of choice. Even if its origins required a few liberties with the truth, the idea has caught on in a very real way for subsequent generations.

Rice Pudding for Elves in Denmark

American children leave out milk and cookies for jolly old Saint Nick just to be nice, but Danish kids have extra incentive to bribe their nocturnal visitors with sweets.

According to legend, mischievous elf-like creatures called nisse live in barns and come out in the dead of night. If not appeased, they have a nasty tendency to harm livestock and wreak low-key havoc. (If you can’t find your keys or your watch, the nisse probably swiped ‘em.)

The best way to keep these troublesome sprites happy is to leave out risengrød, or rice pudding. There’s even a song called “The Nisse in the Barn” that describes how much the little guys like their dessert:

Even if you’re not worried about wicked house elves, cold risengrød is delicious, particularly when garnished with warm cherry sauce, slivered almonds, and whipped cream. It’s also fairly easy to make for yourself.

Pickles and Lies in Germany

Perhaps the most puzzling thing about the traditional German Weihnachtsgurke, or “Christmas pickle,” is that it may not be a real German tradition at all.

The way it works is that families hide a glass pickle ornament among the ordinary baubles in their Christmas tree. Whoever finds the pickle in the midst of all that tinsel gets either first dibs on opening their presents, an extra gift, or money—depending on the family.

There are various stories as to how this all got started. Some claim that the people of Spreewald, an area outside of Berlin famous for its pickles, used to hang cukes on the tree in lieu of ornaments, while others say that a Bavarian soldier fighting in the American Civil War requested a pickle on his deathbed and it miraculously restored his health.

The wildest story attests that St. Nicholas himself rescued two boys from being pickled to death by an evil innkeeper during the Middle Ages.

Although I lived in Germany for years, I’d never once seen or heard of a Weihnachtsgurke—and it turns out I’m not alone. While German-American families have been faithfully hanging their pickles for years, a 2016 survey found that 91 percent of people in Germany had never heard of the idea.

Instead of an actual folk tradition, the most likely story is that Woolworths came up with the idea as a way to sell novelty Christmas ornaments in the 19th century.

Live Carp in the Bathroom in Central Europe

Nothing says Christmas like a live fish in your bathtub. For families in the Czech Republic, Poland, and Slovakia, there’s a long history of keeping carp alive for a few days leading up to the holidays. In a number of Central and Eastern European cultures, a pescatarian Christmas Eve feast is both traditional and auspicious.

There are a few reasons to go to the trouble of giving up access to your tub for a couple of days. For starters, you know the fish you’re getting will be fresh. And some home cooks swear that giving these bottom-feeders a chance to clear their digestive tracts results in a cleaner flavor profile. Depending on the country, the carp may end up as a savory aspic, a fish soup, or perhaps breaded and fried.

The only real glitch with this method is that you can’t catch feelings for your temporary housepet. In The Carp in the Bathtub, a 1972 children’s book about a Jewish family in New York, two siblings valiantly attempt to save their catch from becoming gefilte fish.

Cheese and Fruitcake in England

Pairing savory cheeses with sweet baked goods is one of those ideas that just makes a lot of sense (If you haven’t tried putting a thick slice of cheddar on warm apple pie, get on that.) In Yorkshire, England, Christmas time means Christmas cake—that amalgamation of dried fruit and nuts bound up in a dense, boozy confection the rest of us just call fruitcake—which is best served with cheese.

No one quite knows how this tradition got started, but food historian Peter Brears believes that it dates back to the Victorian era. The town of Wensleydale, Yorkshire is home to a particularly sharp, tangy cheese that reaches maturity right around the holidays.

Nowadays, this historically regional tradition is starting to spread, in part because cheesemongers have realized how brilliant it is. Give it a try this year and you may never crack another joke about using your fruitcakes for doorstops and paperweights.