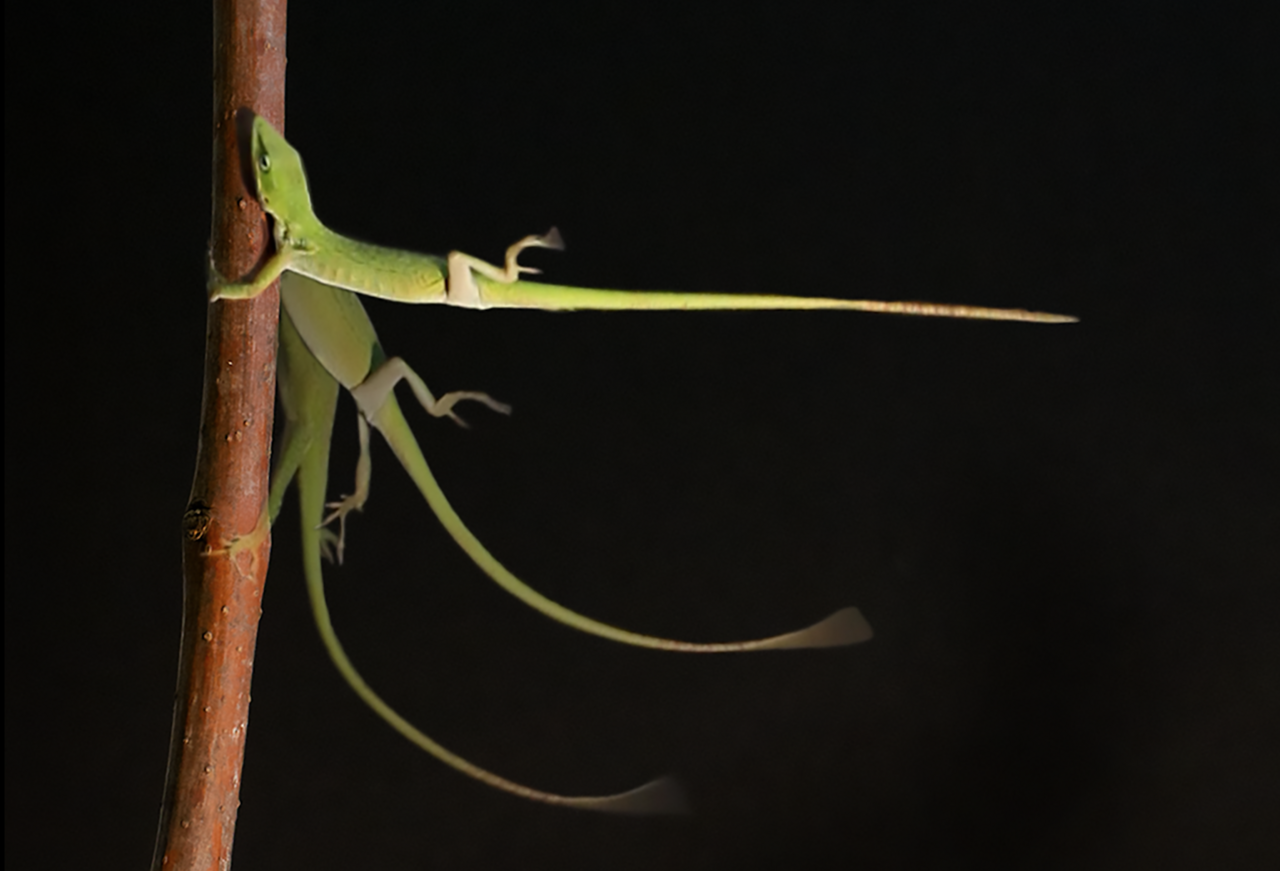 Even in hurricane-force winds, the anole manages to hang on. Courtesy Colin Donihue, Ben Kazez
In This Story
Destination Guide

Resilience is something shared by every surviving organism on the planet—they’ve all made it this far, through hundreds of millions of years of evolution and, so far, a few centuries of human meddling. But some species have managed to keep up with the rapid change we have brought to the world better than others, it seems. Take the anole lizards of the Western hemisphere, which may need to come to grips with intensifying hurricane seasons.

“We weren’t really sure, nobody was sure, what an anole is supposed to do during a hurricane,” says Colin Donihue, a biologist at Washington University in St. Louis and lead author of a new paper in the journal Proceedings of the National Academy of Sciences.

To understand how the slight reptiles respond to storm situations in real time, and unable to watch them during an actual hurricane, the team set about recreating a major storm.

“We got a leaf blower set up, and we filmed these lizards as they reacted to those hurricane-force winds,” Donihue says. “The lizards consistently reposition themselves around the perch so that they’re in the lee. A lot of the time, their back legs would get thrown off and they’d hold on with just their front legs.”

Grip can be a matter of life or death for a tropical lizard. The ability to scamper up and cling to a tree trunk to avoid a prowling cat is critical. And a hurricane is another kind of threat entirely; because of storm surges, hiding among tree roots is out of the question, and the winds are strong enough to take out trees and houses. What chance does a small lizard have against that?

The key to the anole’s grip is its toe pads, which provide traction that can vary based on their size. Donihue’s team wanted to understand how the surface area of these pads has varied from generation to generation in populations that survived storms. They began their hunt in Turks and Caicos in 2017, where the local anole—Anolis scriptus—showed that something was afoot.

“After Irma and Maria barreled through, that was the first indication that hurricanes had driven natural selections,” Donihue says. “The lizard survivors of the hurricanes had traits that differed from the population at large before the hurricane hit.”

They found that the size of the anoles’ mitts correspond to the severe storms that have torn through tropical regions in the last few years. The extreme weather blew smaller-footed lizards into oblivion, leaving only those with sufficient pedal wherewithal—larger toe pads—to breed the next generation, a textbook case of natural (in this case somewhat unnatural) selection. In the recent paper, Donihue’s team extended beyond Turks and Caicos to nearly 200 anole species ranging from Florida to Brazil, and saw the same trend.

It remains to be determined whether there’s a limit on toe pad growth, Doniue adds, though one must exist. They still have to be able to walk around.

“There must be a tradeoff between having big toe pads during a hurricane and not having absolutely massive toe pads that are so big you can’t really be a good lizard,” he says. “When I talk about being a good lizard, I mean having traits that give you an advantage in all the things you need to survive. Those traits aren’t necessarily the same as those traits that help you survive in a hurricane.”

Moving them from island to island is one way to conserve them.
islands

Back when reptiles were all the rage, Adalatherium really stood out.
islands

Lucas Bustamante wants you to fall in love.
Video • Object of Intrigue