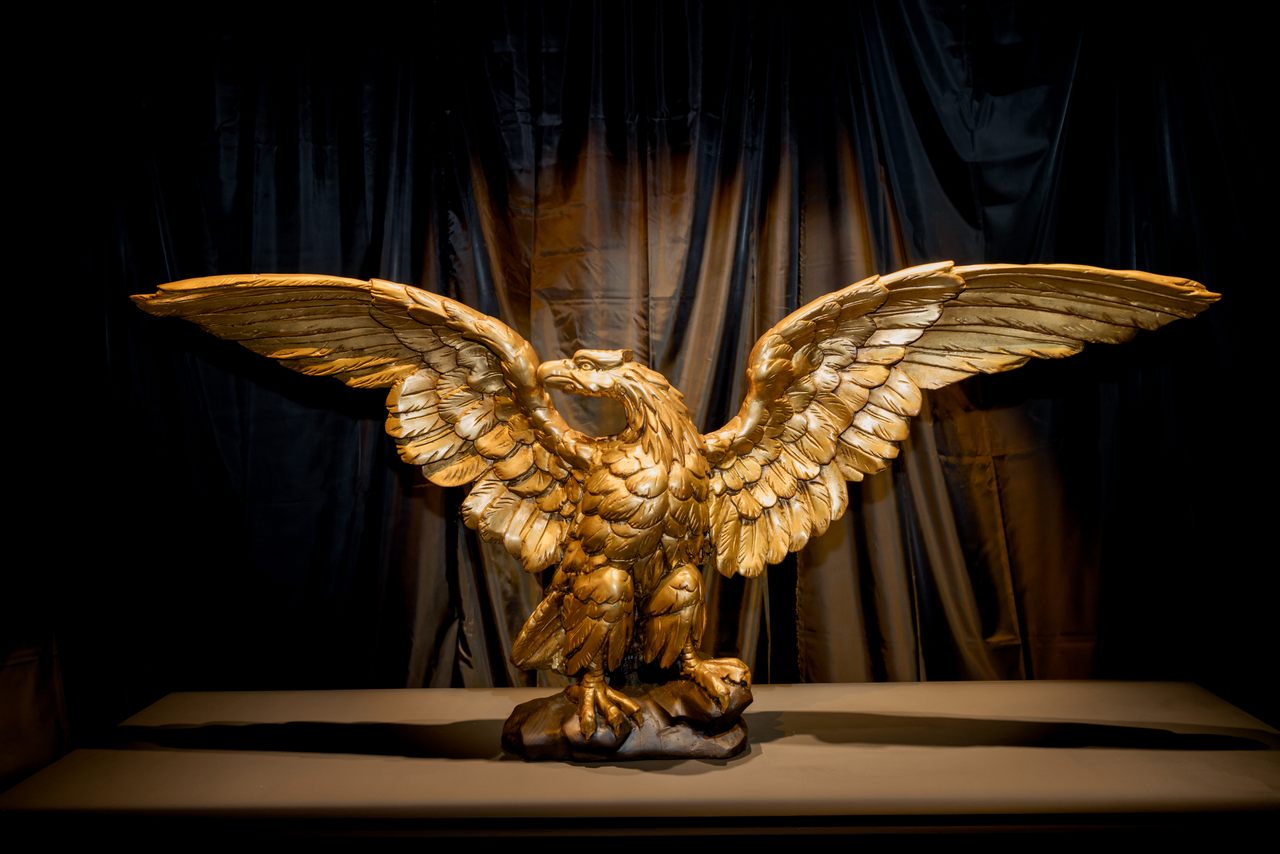 After an adventurous life, this golden eagle sculpture is again on display at the Lobero Theatre in Santa Barbara, California. Zach Mendez
In This Story
Destination Guide

Shipwrecked, traded for a bottle of whiskey, shot with an arrow, then twice lost for decades and recovered, the gilded wooden sculpture known as the Lobero Golden Eagle is now—finally—back at the Lobero Theatre* in Santa Barbara, California.

The eagle owes its most recent rediscovery and rescue to Brett Hodges, a board member of both the theatre and the Santa Barbara Historical Museum, who first learned about the battered bird while digging into the Lobero’s history in preparation for its 100th and 150th anniversaries. (More about the double celebration later.)

The eagle’s long and eventful story begins, Hodges discovered, when the 1849 California gold rush lured fortune seekers from around the world, sparking the biggest migration in American history. That’s when Cornelius Vanderbilt saw an opportunity. The business magnate who made his fortune in railways and shipping quickly assembled a fleet to carry “forty-niners” to California and deliver gold on return journeys.

The Yankee Blade, a side-steamer built in 1853, became the star of the fleet on its run between San Francisco and Panama. (This was long before the canal was built. After crossing Panama to the Caribbean side, passengers would transfer to another Vanderbilt ship headed for New York.) To adorn the luxurious Yankee Blade, an unknown artist gilded every inch of a wooden eagle’s white oak body and California redwood wings with gold leaf.

In October 1854, tragedy struck. “The idiot captain was racing full speed in the fog as a bet with another captain to see who could make it to Panama first,” says Hodges, who found the story in the October 10, 1854 edition of the Sacramento Daily Union newspaper.

The Yankee Blade struck rocks a couple hundred yards off Point Pedernales about 70 miles north of Santa Barbara. When she broke up and sank, up to 40 of an estimated 1200 passengers went down with the ship, as did a fortune in California gold bullion and freshly minted $20 gold coins.

A couple months later, a boy named D. W. Thompson was riding the beach on Santa Rosa Island, about 40 miles from the site of the sinking, where his uncle ran a cattle ranch. In an 1881 letter to the editor of the Santa Barbara Daily Press, Thompson himself told the story of how he spotted something floating in a kelp bed. It was the golden eagle and other wreckage from the Yankee Blade.

Less than a year later,* someone from the ranch carried the eagle across the channel into what was then the small town of Santa Barbara. As the legend goes, soon after, it was traded at Jose Lobero’s saloon for a bottle of whiskey.

As a recent Italian immigrant and a trombone player,* Lobero dreamed of bringing European culture to the Wild West. To that end, he converted a huge, old adobe schoolhouse into an opera house.

When the theater opened in 1873, Lobero hung the golden eagle over the stage’s proscenium arch where it presided for at least 40 years. But Lobero had greatly overestimated his potential audience. The population of Santa Barbara was only 3000—his new theater seated 1300. For a town Hodges describes as isolated and unsophisticated, the best Lobero could manage was to sprinkle a little opera in with the more popular vaudeville acts, minstrel shows and melodramas that featured nefarious villains. And when the Potter Theatre opened in 1907, it stole much of the Lobero’s business. The Lobero went dark in 1917.

But that wasn’t the end of the story. A group of theater lovers took possession of the Lobero, but realized it was beyond repair. They tore it down and built a new theater in 1924. Thus 2023 and 2024 mark the Lobero’s 150th, then its 100th anniversary.

Between the loss of the original Lobero Opera House and the construction of its replacement, the eagle disappeared, its whereabouts a mystery for 43 years. It wasn’t until an amateur historian sleuth named Walker Thompkins* connected the dots in 1960 that the eagle was found.

It turns out a turkey farmer named Mary Kinevan had purchased the eagle at an auction for $5 in 1929 and perched it atop her ranch’s entrance gate. During its stay there, someone shot it with an arrow. The arrowhead remained lodged in the wood, even after the Kinevan family donated the eagle to the Santa Barbara Historical Museum in 1961. Hodges rediscovered it in the museum collection and he and Dacia Harwood, executive director of the museum, set about restoring the eagle and returning it to the theatre.

When they found the eagle, it looked like it did when the Kinevan family turned it over to the museum—slightly damaged with that arrowhead in its chest and covered in what Hodges describes as layers of gloppy, brown paint. Over a nine-month period, restorer Chris Bailey painstakingly sanded every speck of paint off of each of the hundreds of carved feathers before gilding the eagle again in gold.

The eagle will be on display in the Lobero’s lobby in all its restored glory through 2024. Beyond that, the golden bird’s future is as up in the air as it has always been.

*Correction: An earlier version of the story misstated the current name of the Lobero Theatre, the date Lobero acquired the eagle, the instrument Lobero played, and the name of amateur historian Walker Thompkins.

The strange bronze artifact perplexed scholars for more than a century, including how it traveled so far from home.
shipwrecks

More than 200 enslaved people perished when the Portuguese ship sank in 1794.
objects of intrigue

Inspired by the Bayeux Tapestry, artists and embroiderers in a Newfoundland village commemorated a lost way of life.
Video