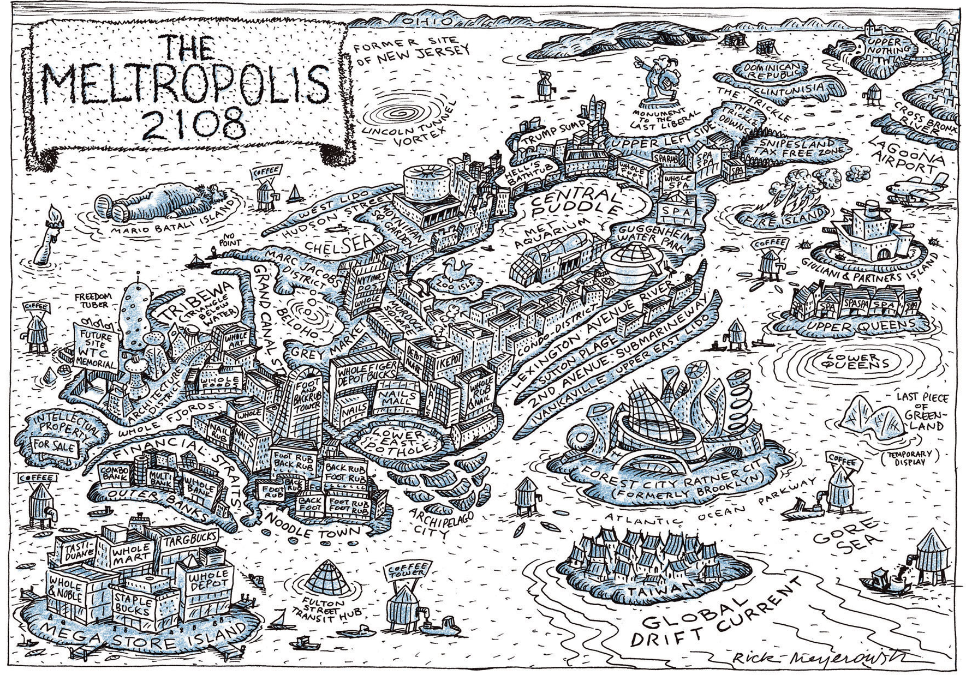 The Metropolis 2108 by Rick Meyerowitz. (c) Rick Meyerowitz, 2008/ All photos courtesy of Princeton Architectural Press
In This Story
Destination Guide

Imagine life a thousand years from now. What comes to mind? Colonies on Mars, artificial intelligence that lives alongside humans (or has enslaved us), virtual reality that helps you live whatever life you want (or disconnects you from the world)? The visions might change depending on how optimistic you are about the future of humanity.

But if you’re feeling too lazy to imagine anything right now, worry not! This 2008 map by Rick Meyerowitz provides an illustration of what life could be like in New York in the year 2108. And according to the map, the future is very, very watery.

Meyerowitz’s darkly funny map is featured in the book You Are Here: NYC: Mapping the Soul of the City, written by Katharine Harmon and published by Princeton Architectural Press. One of Lampoon Magazine’s most renowned illustrators, Meyerowitz has brought sarcasm and comedy to the lives of Americans for decades with work like the iconic poster for the 1978 film, Animal House.

The Metropolis 2108 shows most of New York City underwater. New Jersey is almost completely gone, except for a tiny stretch of land called West Lido. Some beloved NYC neighborhoods also meet a watery grave: Tribeca becomes Tribewa (Triangle Below Water), SoHo is now Beloho, the Lower East Side is the Lower East Pothole, and Hell’s Kitchen has been replaced by Hell’s Bathtub.

Likewise, the only part of Brooklyn that survives is its downtown, crossed by the Atlantic Ocean Parkway, and renamed Forest City Ratner City after the real-estate company that rents office spaces in the area. The Statue of Liberty, perhaps the most widely recognized symbol of the United States, is gone entirely but for the forearm that continues to hold the torch above the water.

Of course, not everything is bad in this new world. Those who formerly thought the Metropolitan Museum of Art to be too antiquated and boring will in the future be able to enjoy the Met Aquarium, where a happy whale resides. Likewise, the Guggenheim will no longer hold abstract artworks. In fact, it will hold no expositions at all, since it will be a water park.

While concerns arise pertaining to certain perks of modern life we are accustomed to, Meyerowitz has taken the trouble to reassure us of our ability to adapt. Without streets, our beloved La Guardia airport will become Lagoona Airport and employ planes that can land on water. Even more importantly, coffee shops will be replaced by coffee boats that will transit all around the city, and recharge at the coffee tower to keep New Yorkers awake and happy.

Almost the entire landmass left after the great flood is invaded by megastores and retail giants like Whole Mart and Targbucks. Staten Island will be completely dedicated to these commerces, even being renamed “Mega Store Island. And if you want to spend your time in the post-apocalyptic world in luxury, Condo District looks like it has some great views over Lexington Avenue River. Otherwise, head over to The Trickle Downs neighborhood or Snipesland Tax Free Zone, in the present Upper West Side.

Seasons may change, polar caps may melt, but exclusive neighborhoods will apparently persist until the end of time.

Join us for a daily celebration of the world’s most wondrous, unexpected, even strange places.
rare books