This Island in the Amazon Is Producing Award-Winning Cheese - Gastro Obscura
Want to see fewer ads? Become a Member. 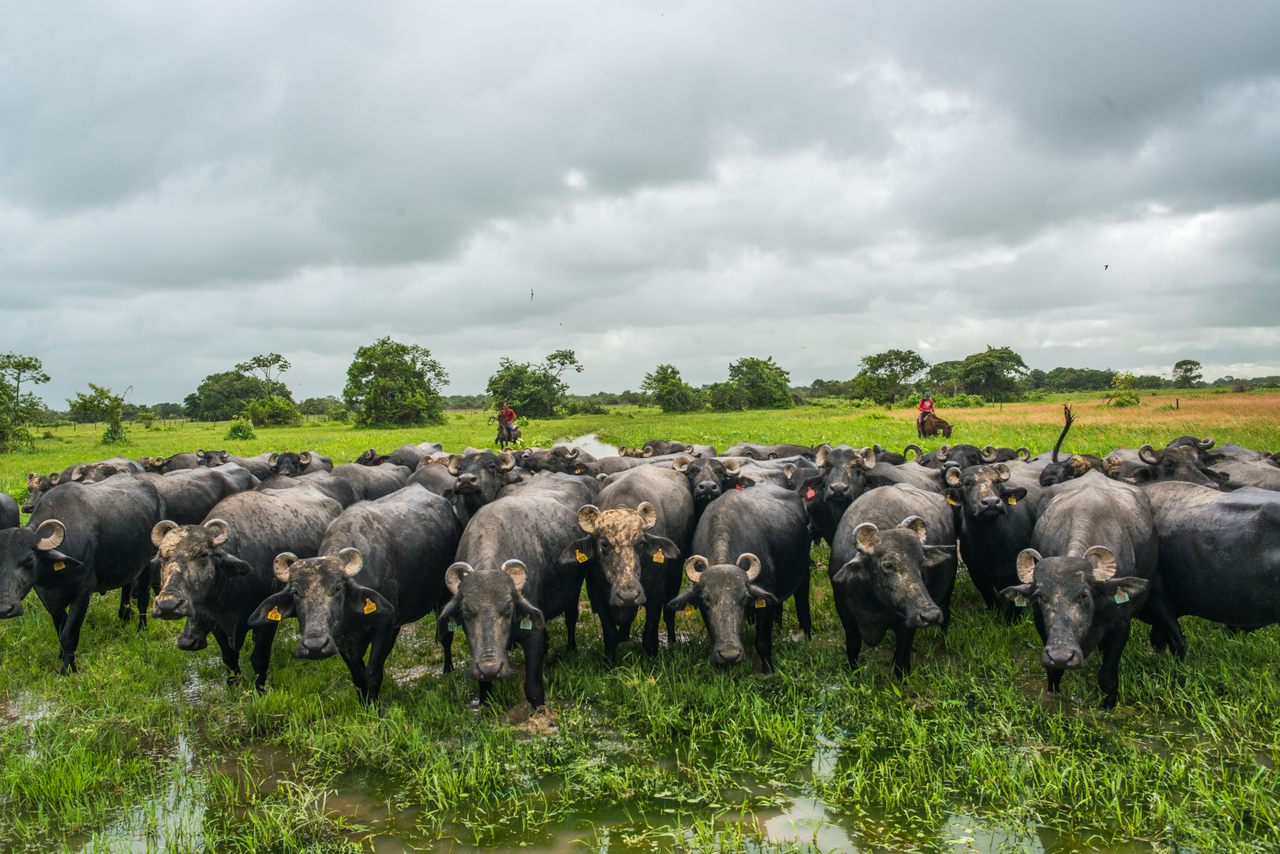 The herd at São Victor. Fernando Sette
In This Story
Destination Guide

Marajó, Brazil, is the world’s largest fluvial-maritime island. Located at the mouth of the Amazon River, it was built over millennia by the waterway itself, which carried sediment that collected until it formed an island nearly as big as Switzerland.

In Marajó, seasonal river floodings submerge most of the island, water bugs are the size of a man’s palm, and buffalos are more numerous than humans, outnumbering residents 376,00 to 358,000. (That’s according to 2010 census data, and the gap between buffalo and human residents has likely grown.) The buffalos are intrinsic to Marajó’s scenery—you see them cooling off in muddy roadside ponds, sharing the streets with pedestrians while strolling through towns, and even providing rides to the local mounted police.

They are also behind the island’s quintessential cheese, queijo de búfala do Marajó, which is a trademark of local culinary identity. “The whole process takes 24 hours,” says Cecília Pinheiro, a well-known cheese producer on the island, of the full day it takes to transform buffalo milk into Marajó cheese. “It’s an all-natural cheese influenced by the micro-biodiversity of our island.”

Until recently, getting a taste required a boat trip to Marajó, a three-hour trip from Belém, the capital of the Amazonian State of Pará. But thanks to initiatives pioneered by producers such as Pinheiro, the cheese is more widely available, winning acclaim even from the fromage-obsessed French and increasingly putting this very large island on the foodie map.

Cheesemaking has been in Pinheiro’s family for at least a century. “My great-grandfather was French and came to Marajó in the early 1900s,” she says. “Documents say she sold cheese here since 1922.”

“The variation of climate and soil conditions according to the season affects the pasture that feeds the buffalos, the chemical composition of the buffalo’s milk, and, ultimately, the physical-chemical parameters of the cheese,” she says.

Combined with the specific buffalo species, the native grasses, and local cheesemaking traditions, this produces a cheese “of smooth texture, compact, with small and few holes, pleasant aroma, slightly salty and sour, and of yellow-greenish color.” And unlike internationally popular buffalo mozzarella, which is often made with artificial rennet, yeast, and calcium chloride, its production is distinctly traditional.

In 2006, Pinheiro and her husband founded São Victor, a buffalo meat and dairy farm. But at that time, what was produced in Marajó stayed in Marajó—sanitary restrictions barred them and any other cheesemaker from selling their products elsewhere. Marajó cheese was literally on an island, isolated from the rest of the world.

“There are many families who produce it informally, for their own consumption,” says Pinheiro. “Otherwise, they sell it to small markets, bakeries, or their own neighbors, who eat it in several ways, pretty much any time of day: inside a loaf, on top of buffalo beef … Some municipalities even include it in public school meals.”

While Marajó cheesemakers have been allowed to trade the cheese across Pará State since 2013, selling across the country or internationally was restricted by Brazilian regulation. So, in 2015, producers like Pinheiro started asking local authorities for Pará to join SISBI-POA, the Brazilian Inspection System for Products of Animal Origin, linked to Brazil’s Agriculture Ministry.

Their letter-writing campaign produced few results, though, until 2019, when a new national regulation of animal products, Decree 9.918, created a specific quality standard, called Selo Arte, that gave artisanal products a seal of approval to be sold across Brazil. Then things moved quickly.

“We had already met all their sanitary requirements,” says Pinheiro. “We have always kept track of our buffalos’ health, and their vaccines were always up to date.”

In March 2020, Pinheiro received authorization to sell Marajó cheese outside Pará, to clients like gourmet shops in Rio de Janeiro and São Paulo. Pinheiro’s achievement paved the way for at least three other producers. “Now, some restaurants in Belém even put it in sushi,” says Olavo Teixeira, one such producer who, at age 70, is continuing a family buffalo-cheesemaking tradition as old as she is.

“This rule protects our cheese, which is a big symbol of our culture,” says Pinheiro, who highlights the cheese’s role in the Marajó way of life. It “enables cheesemasters to provide for their families with dignity. At the same time, it remains financially accessible for the island’s inhabitants, since micro and small-scale cheesemakers sell it for more affordable prices.”

“It’s present in our diet from breakfast to dinner,” adds Teixeira.

Receiving protected status is a sign of Marajó cheese’s greater renown—a decade or so ago, few cheesemakers would have seen any benefit to making it or using the name. But, among other recognitions of Marajó cheese, Pinheiro’s cheese in 2019 was a runner-up in the French contest “Mondial du Fromage.” Out of 952 competing products from 15 countries, her buffalo cheese received a silver medal.

Among Marajó cheesemakers, this pride is shared. After all, during a time when ultra-processed food and time optimization reign, an all-natural, 24-hour-long cheesemaking process is winning the race on the island, continuing a tradition that, despite adversity, has remained strong for more than a century.

Bovine researchers believe the world needs the only cow adapted to the largest tropical wetlands.
islands

Join us for a daily celebration of the world’s most wondrous, unexpected, even strange stories.
Video • PinDrop