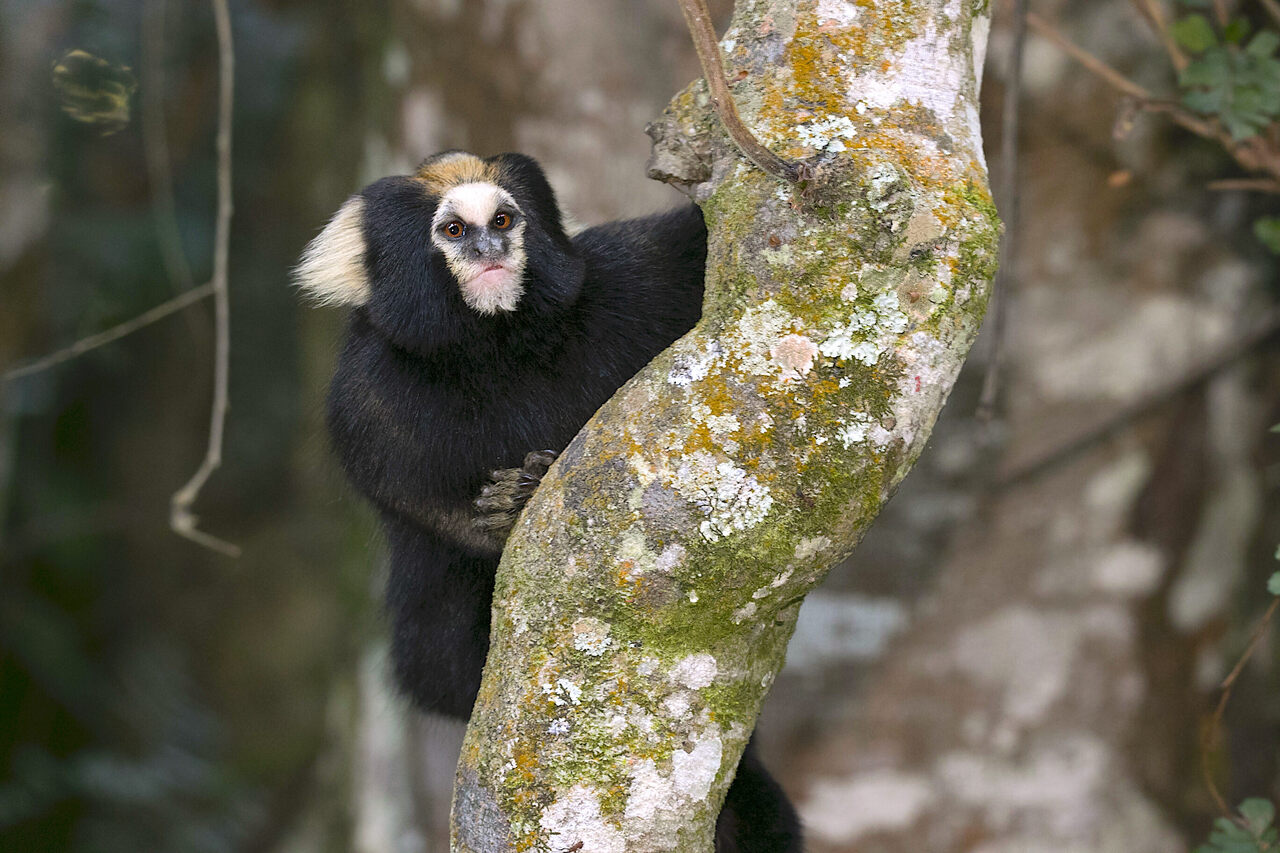 The buffy-tufted-ear marmoset isn't as beloved as its cuter counterparts. Courtesy Rodrigo Bramili
In This Story
Destination Guide

In 1979, When Rodrigo Carvalho was nine years old, his mother took him to Rio De Janeiro’s largest outdoor market, Feira Nordestina, where more than 600 vendors from Brazil’s Northeast region came to sell their wares. These include food, folk medicine, handicrafts—and cages upon cages of wild animals. “I very much remember the snakes, because I was always fascinated by snakes,” Carvalho says. “But there were turtles and monkeys and thousands of birds.”

Wildlife trafficking in Brazil happens mostly out of sight these days, but it remains a widespread problem. According to the WWF, “approximately 38 million wild animals are removed from Brazilian natural habitats every year.” About 4 million of them end up as pets. The demand for illegally trafficked animals is greatest near the urban centers of São Paulo and Rio, where Carvalho grew up.

Carvalho doesn’t recall seeing common marmosets at the market, but they were almost certainly there. “Pocket monkeys,” as they’re sometimes called, were (and still are) immensely popular to keep as pets—at least until they reveal themselves to be fickle, feral, and smelly. Thanks to decades of fed-up pet owners turning them loose, the common marmoset, endemic to the north and central areas of Brazil, has fully invaded the Atlantic rainforest biome that surrounds the urban sprawl along Brazil’s Atlantic coast.

Today, there are so many common marmosets in Rio, “most people assume they are a native species,” says Carvalho. In the city, common marmosets run rampant, munching on birds’ eggs and wreaking havoc on the food chain. And they’ve gotten away with it for one, very specific reason: They’re adorable.

Carvalho ended up studying the impact of invasive common marmosets on endemic primates for his PhD studies from 2011 to 2015. What he found was that while common marmosets were multiplying, populations of the area’s native marmosets—the buffy-tufted-ear marmoset among them—were plummeting.

The buffy-tufted-ear marmoset, Carvalho learned, was fighting a multifront war. These marmosets are arboreal, spending most of their lives high in the trees of the rugged uplands of the Atlantic rainforest, habitat that has all but disappeared amid the region’s rapid and unrelenting urbanization. Diseases—yellow fever and Zika, in particular—have also taken their toll on the species.

But the biggest threat to the buffy-tufted-ear marmoset came from an unexpected source: those adorable common marmosets.

In the end, he estimated that there were fewer than 10,000 fully buffy-tufted-ear marmosets left, a population much smaller than the “vulnerable” status indicated. (Thanks in part to Carvalho’s work, today the IUCN lists them as one of the world’s 25 most endangered primates. The common marmoset’s status is currently “least concern.”)

In 2014, Carvalho established the Mountain Marmoset Conservation Program, which now works on behalf of the buffy-tufted-ear marmoset and its kin, the critically endangered buffy-headed marmoset. From the beginning, Carvalho knew one of the organization’s biggest hurdles would be challenging people’s affection for the common marmoset.

This is a good time to mention that there’s one more thing working against the buffy-tufted-ear marmoset: Unlike the common marmoset, it isn’t cute, at least not by most standards. With a perma-sneer and menacingly orange eyes, the tiny primate looks like it woke up wearing yesterday’s makeup. Because of its haggard countenance and standoffish nature, staff at Carvalho’s organization lovingly call it “the little goth monkey.” (The Portuguese moniker is a tad kinder: sagui-caverinha,* or, “little skull monkey.”)

With a face only a marmoset mother could love, buffy-tufted-ear marmosets would do well to make inroads with the humans deciding their fate. But they don’t. Carvalho says that if you go to any park in Rio with a banana in your hand, “you’ll have five common marmosets near you” in seconds. Buffy-tufted-ear marmosets keep a wide berth. Most people in Rio have never seen one. “They’re invisible,” Carvalho says.

But the plight of the buffy-tufted-ear marmoset turns that concept on its head. What is a conservationist to do when the invasive species is more charismatic than the native species it’s harming?

According to a recent study initiated by the Invasion Dynamics Network, a group of scientists dedicated to studying the impact of biological invasions, “unlike the charisma of threatened species, which has a positive effect on management efforts, charisma in [invasive alien species] usually represents a hindrance to management.”

This has played out many times over in ecosystems around the world. In southeast Spain, for example, the imported prickly pear cactus has become such an iconic symbol of the region’s landscape, it’s been featured on postage stamps. South Africans adore the purple flowers of invasive jacaranda trees so much, officials in Pretoria adopted the nickname “Jacaranda City.” Released monk parakeets have proliferated in Brooklyn’s Green-Wood Cemetery and in Chicago; a recent headline announced, “neighbors love it.” Perhaps the most infamously charismatic invasive creatures of all are Pablo Escobar’s destructive hippos, which have survived constant culling threats thanks to the Colombians who adore them. All of these species thrive at the expense of native flora and fauna.

Ultimately, Carvalho and his team knew a campaign against common marmosets—either through removal or sterilization—was a losing battle. “They’re just too damn cute,” says James Hall, MMCP’s volunteer research coordinator. Brazilians, many of whom enjoy interacting with and feeding common marmosets in their neighborhoods, wouldn’t go for it.

Instead the MMCP has leaned into other strategies, including fighting to preserve and restore the Atlantic rainforest. The team also built the species’ first dedicated captive breeding center in Viçosa, Brazil, where a safety-net population of non-hybridized buffy-tufted-ear marmosets can be raised should the one in the wild collapse completely. The center’s first pair were introduced just last month. It must have been a match: They’ve already mated, and a pregnancy announcement could come shortly.

The MMCP has also released a number of environmental education materials designed for kids, including a coloring book, comic book, and board game. “The best thing we can do is talk to our children,” Carvalho insists. “They will be responsible for the [buffy-tufted-ear] marmoset very soon.” He hopes young Brazilians won’t meet the little goth monkey in a market or a zoo, but where it belongs: flourishing in the wild.

It took a custom-built barge and a whole lot of patience to get these rare animals off a shrinking island.
earthquakes

Low-cost seismometers could give rural communities an alert system, or begin to decipher elephant communication.
nature

Big is beautiful as brown bears pile on the pounds before hibernating in Katmai National Park.
railroads

Khulan have been on the wrong side of the tracks for far too long.
Video

A conservation team wanted to know if removing killer bees would make life easier for Lear's macaw.
Read more
Thanks for sharing!