The Merriam-Webster of Medieval Irish Just Got a Major Update - Atlas Obscura
Want to see fewer ads? Become a Member. 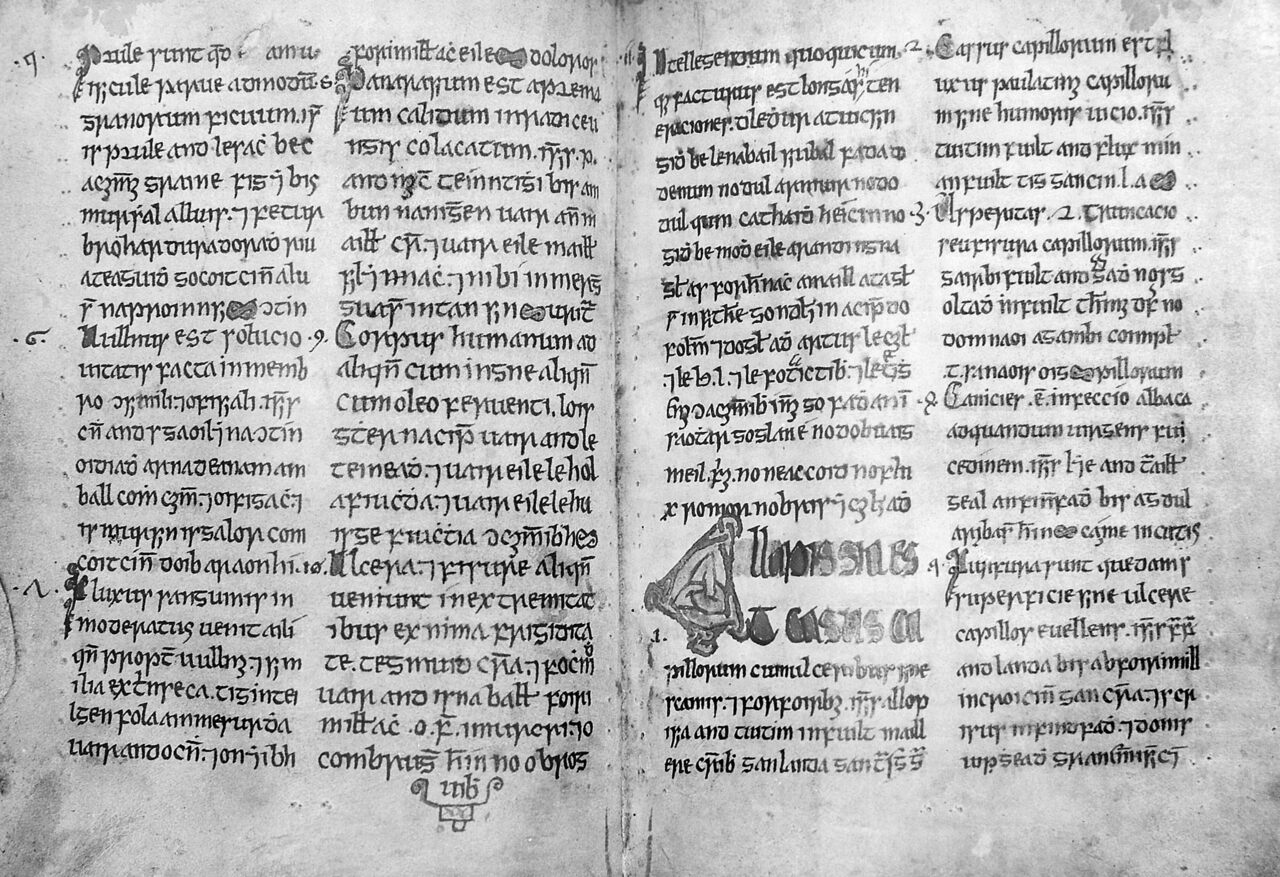 A 15th-century medical manuscript in Gaelic. No spaces here! Wellcome Collection/CC by 4.0
In This Story
Destination Guide

For the past five years, Sharon Arbuthnot has been on the hunt for new words. She isn’t searching in the places one might expect linguistic invention, such as far corners of the internet or the text messages of teenagers. Arbuthnot, a scholar of early and medieval Irish at Queen’s University Belfast, is more interested in forgotten words, ones invented over a thousand years ago that have become lost to modern scholars and dictionaries. So she spends her days poring over delicately inked manuscripts written in medieval Irish, scanning for an arrangement of letters that seems somehow new—a difficult thing for a language that’s well over a thousand years old. “It’s quite a lonely job,” she says with a laugh. “But I guess it’s what I do.”

Arbuthnot and researchers from the University of Cambridge have just completed the monumental, sprawling project of revising the Dictionary of the Irish Language, which was first published by the Royal Irish Academy in the first half of the 20th century. Over the past five years, they identified 500 words lost from dictionaries for centuries, made around 5,000 revisions to current definitions, and debunked several words that turned out to be fake or erroneously defined. The dictionary, which was digitized in 2007 by scholars at the University of Ulster, spans around a thousand years, from about 700 to 1700. Their research is funded by the United Kingdom’s Arts and Humanities Research Council.

Updating the lexicon of a thousand-year-old language may seem like a foolish task for anyone living in the 21st century. But understanding the words medieval people used offers insight into the lives they lived—how they behaved, what they believed, and how they saw the world, says Máire Ní Mhaonaigh, a medievalist at Cambridge, who worked with Arbuthnot, in a press release.

To maximize their chances of discovering new words, the researchers focused on less-studied, and often less savory, manuscripts. This meant shelving popular stories and poems and diving into legal texts and medical tomes. Some texts, by their very nature, are less useful for the job. “You don’t get much vocabulary from genealogies,” Arbuthnot says.

Accordingly, the rediscovered words shed light on a less romantic part of medieval Irish culture. “We found a whole series words on pus, and oozing pus,” she says. “They’re quite nice.” The most common of these words, brachaid, means to ooze pus. The researchers found most examples of brachaid in relation to wounds that happened to be oozing pus, and cleaning wounds that oozed pus.

A similarly gross word the researchers discovered was béochlaid, which means to “rub with grease and fat.” Béochlaid first appeared in a 14th-century passage on how to care for a newborn baby, stressing that people should be careful not to lose anything in the baby’s ears as it is being washed and rubbed with grease.

These words may seems strangely specific now, but might have been quite common in medieval Ireland. Bánbiad translates into “white food,” and was used commonly to refer to dairy products. Slinnénacht refers to the particular practice of divination done with the shoulder-blade of an animal, and appeared around the 1600s in a text describing a host of supernatural processes, including néladóirecht (cloud-divination) and dernatóracht (palmistry). Another oddly precise and once-useful term, ól Pátraic, which translates into “St. Patrick’s measure,” refers to the amount of liquid that could feasibly fill 1,728 eggshells.

Medieval Irish, like many other languages at the time, was written in scriptio continua, a style of writing without spaces. In other words, the manuscripts contain long strings of text without any division, with words written continuously into each other. “Sometimes you’ll find the rare large capital letter, but really it’s just continuous running text,” Arbuthnot says. “Once you’ve lost your way, it’s hard to get back on again.”

This lack of demarcation between words has resulted in what Arbuthnot calls ghost words, or fake words. “Ghost words come from early editors thinking they recognize a new, strange cluster of letters, which they put in the dictionary,” she says, adding that such words often turn out to be two individual existing words that are quite straightforward. One ghost word stricken from the latest update is tapairis, which past translators believed to be an unknown medicinal substance but actually arose from two words that mean “grains of paradise,” a spice related to cardamom.

This means, of course, that any seemingly new word is put to a rigorous test before an official addition to the dictionary. “There are always combinations of letters that don’t look quite right, or are not obviously related to any word,” Arbuthnot says. “To avoid the danger of introducing ghost words, we hold them back for a while in a database.” The researchers currently have around 20 of these maybe-words—or, as Arbuthnot notes, “maybe-not words”—awaiting their fate as either something rare and newly uncovered, or simply an odd cluster of letters that represent the medieval equivalent of a typo. “Scribes made mistakes,” she says. “And their errors have a tendency to take on a life of their own.”

Though she hardly thinks that any of the 500 words will enter modern use, Arbuthnot hopes that people will use the dictionary to gain a fuller understanding of medieval Ireland. She was loath to mention that the revision updated the entry on leprechauns: When media outlets latch on to this popularly Irish detail, Arbuthnot feels it diminishes the dictionary’s work. “There are things that make us Irish aside from what the outside world sees as Ireland,” she says, referring to a phenomenon she calls “leprechaun sensationalism.”

It takes a particular kind of person to revise a bygone dictionary. The job’s main requirement is a sprawling, extensive knowledge of a vocabulary that’s fallen out of use. “It’s quite a demanding job,” Arbuthnot says. When she first started out around 10 years ago, she would look up every third word she found. “It’s definitely gotten easier as the years have gone on, but you could still spend a lifetime and be misled.” Her only full-time coworker works in Cambridge, England, so she spends much of her day alone, trawling through scans of yellowed vellum on a solitary screen. Sometimes, they’ll discover examples of the same new word, which she says strengthens the trustworthiness of their dictionary.

Arbuthnot has no intention of stopping her linguistic detective work. She hopes to release another 5,000 corrections in the next five years. Despite the stops and starts, there’s nothing like the thrill of discovery. “For a day or two, you know you’re the only person living that knows this word exists,” she says. “Anyone who spends any time with Old Irish is trapped on this feeling.”

The New Vonnegut Museum Could Only Have Ever Been in Indianapolis

Archaeologists may have found where one of the country's oldest manuscripts was written.
libraries

Feel free to judge these books by their covers.
king arthur

The fragments tell a new version of the magician's encounter with the enchantress Viviane.
Video • AO Docs

1:15
Want to see fewer ads? Become a Member.
From Around the Web
Atlas Obscura Trips
Literature, Lore & Libations Across Ireland’s Northwest
View This Trip
Thanks for sharing!