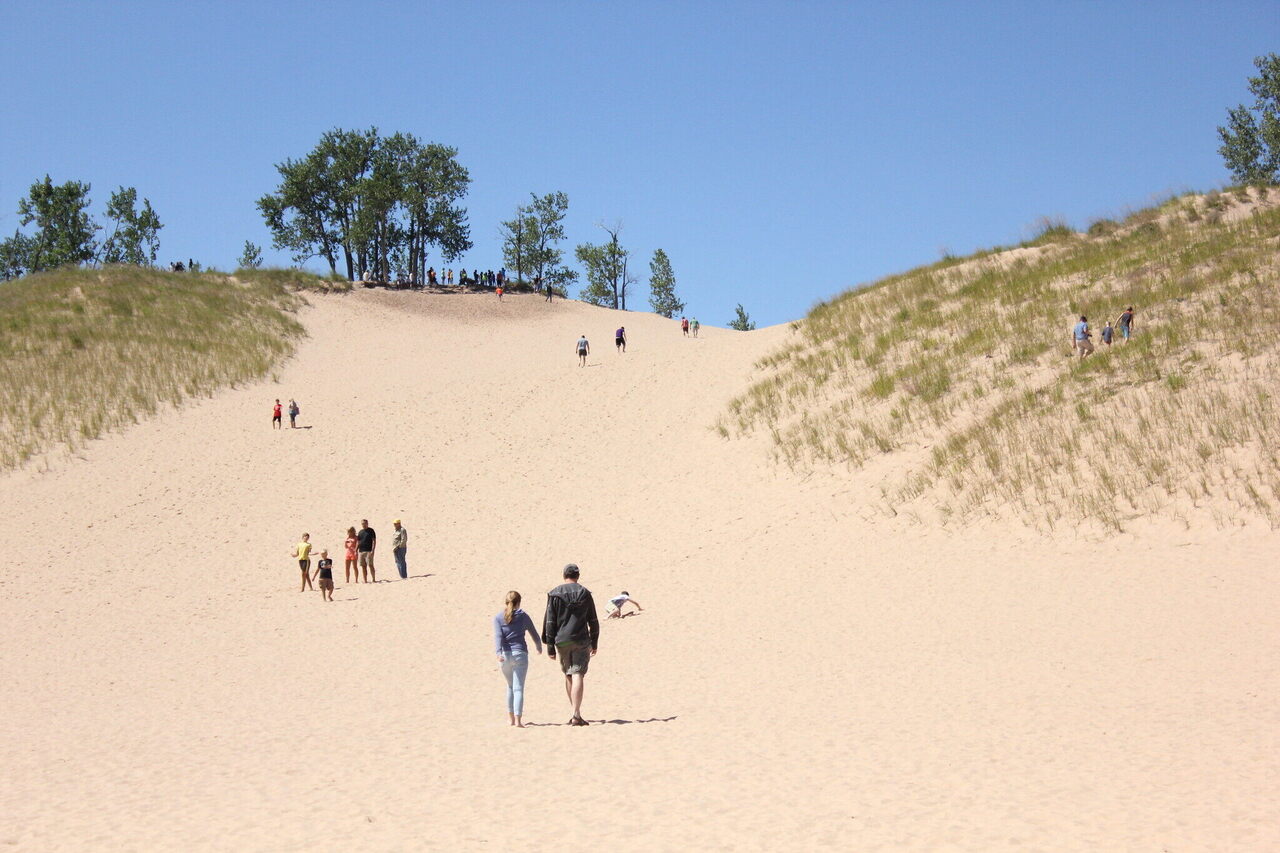 Sleeping Bear Dunes, pictured here in 2014, is an appealing place for socially distant strolling. Paul Wilkinson/CC by 2.0
In This Story
Place

This national park on the shore of Lake Michigan features remarkable dunes that lie at the heart of a Chippewa legend.

Sleeping Bear Dunes National Lakeshore, on the northeast shore of Lake Michigan, has become a haven for families that want to stretch their legs and get some fresh air as a break from hunkering down. Though the place isn’t as busy as it would be in a typical spring, “We’re seeing lots of traffic and people out and about in the park,” says Merrith Baughman, a park ranger and the chief of interpretation and visitor services. Park staff and law enforcement officials have been steering visitors away from barricaded trails such as the popular Empire Bluff path, which leads out to an overlook too narrow to accommodate social distancing, and instead nudging guests toward the park’s 35 miles of shoreline on the mainland. (An additional 30 miles ring the Manitou Islands, which sit about seven miles offshore.) When the trails reopen on Friday, May 22, Baughman says, the beaches will still offer “lots and lots of places people can spread out.”

The influx of coastal visitors poses opportunities for archaeologists who study and protect the region’s shipwrecks. Manitou Passage Underwater Preserve, just off the coast of Sleeping Bear Dunes, is home to roughly a dozen wrecks. In all, the state of Michigan’s waters are home to at least 1,500.

Wayne Lusardi, Michigan’s maritime archaeologist with the Department of Natural Resources, gets it: Beachcombers thrill at the thought of finding a bit of a wrecked ship. It’s tempting to think that any water-slicked, sand-crusted, old-looking thing that washes ashore must be storied; he frequently fields inquiries from people who think that they’ve found something remarkable. In Michigan, the current coronavirus pandemic happens to coincide with pleasant weather and unusually high water levels, which can erode shorelines, turn up wrecks, and fling fragments ashore. That can be dicey for archaeology: Exposed fragments are prone to drying out, or being hauled away by people. But these conditions also make it an oddly perfect time to help archaeologists keep an eye on known shipwrecks, and inventory possible odds and ends and other artifacts that are freshly visible.

Some of Michigan’s wrecks and associated debris are stable enough to be marked by interpretive plaques, while others play peekaboo. Under any circumstances, the shoreline around Sleeping Bear Dunes is “very dynamic,” says Laura Quackenbush, the park’s retired curator and historian, who spent about a decade tracking shoreline shipwreck fragments. “Things come and go constantly and move up and down the beach.” That’s partly because of the wind, Lusardi says: The prevailing breezes blow in from the west or southwest, slamming water hard against the shore.

Where Lusardi lives and works, near the Thunder Bay National Marine Sanctuary on the eastern edge of the state, wreckage tends to snag or nestle near bedrock outcrops, and stay put more. Things are wilder over on the western border, he says, where “things tend to be very mobile.” A fragment—or even a large slab—that’s glimpsed on shore one day “may not be there tomorrow, and it may come back two weeks from now,” he says. “Five years from now, it may be 10 miles down the shore.”

Lusardi encourages people to pipe up when they see something, because it might not be around for long. By the time he or one of his colleagues can visit something that’s been reported, it may have vanished again. Conditions at this moment are good for shipwreck-seekers: Lake Michigan has splashed near or above record highs for months. In its latest forecast, the U.S. Army Corps of Engineers estimated that the May water level in Lake Michigan would be 34 inches above the long-term average for the month, seven inches higher than the same time last year, and three inches above its record May high, set in 1986.

High water can aid wreck-seekers in a few ways. It can expose wreckage that has long gone unnoticed, buried in the sand. “You’re walking over it every day, all the time, and you don’t have any idea it’s there,” Lusardi says. When the water rushes up higher and strips away the sand, he adds, it essentially digs the wreck out: “Bam—there it is.” Higher water levels can also shove near-shore debris all the way to the beach.

Because shipwrecks are in constant flux and no single team is tasked with doing regular rounds on all of them, insights from beachgoers can be really useful, Lusardi says—particularly when it comes to logging fragments, which may ride a wave to the shore. “A wooden vessel that’s, say, 130 feet long can be comprised of hundreds, maybe thousands of individual objects, whether they’re nails or planks or whatever,” says Lusardi. That’s a lot to keep track of, and Lusardi could never scour each of the state’s shorelines every day. “The local citizens are the ones who are the eyes and ears,” he says—and he finds that average folks are often eager to pass along information about what they see.

Around seven years ago, when water levels were much lower across the Great Lakes, about a half dozen people a week were calling Lusardi to report shoreline fragments and larger pieces of wrecks that hadn’t been exposed to the air in a long time. Unfortunately, the details were often patchy: People fumbled size estimates, sent blurry or maddeningly zoomed-in photographs that were missing key context, or took photos through the water, where sunlight danced across the frame and warped the appearance of the object itself. Lusardi recognized that he had a window of opportunity before water levels rose again, so he put together a checklist to be filled out by any beachgoer who stumbled across something interesting. (These artifacts should always be left in place, not picked up.) The form asked people to take dimensions with a tape measure, sketch a picture, provide coordinates, and determine the material; Lusardi recommends bringing a little magnet on beach walks, to help gauge whether a fragment contains iron.

Over the past few weeks, Lusardi has noticed another uptick in reports of possibly fascinating flotsam. Across the Great Lakes, Lusardi says, there are upwards of 10,000 boats that wrecked or were deliberately scuttled—though that doesn’t mean that any and all debris on the shore necessarily came loose from one of them. A bit of cylindrical wood, for instance, is more likely to be a piece of an old dock or a fishing net stake, instead of the mast of a long-submerged ship. In Bay de Noc, on the Western side of the state’s upper peninsula, “I’ve seen a telephone pole laying on a beach that was identified as an ancient mast, but it still had the aluminum tag identifying the pole number—and you could see pressure-treated wood, boot marks going up, that sort of thing,” Lusardi says. “I’ve never seen a mast ashore, ever.”

Still, even if a find is fairly mundane, Lusardi says, “I would prefer that everybody reports everything.” Those bits of dock could still be historic cultural resources, and it’s better to err on the side of recording too much, instead of too little. The staff at Sleeping Bear Dunes are considering handing out the form to beach monitors who survey the state of the shore, and maybe to visitors, too. If you’re going to be roaming Michigan shores this spring, get in touch with Lusardi and request a copy of the form to bring with you, just in case. You never know.

The limestone cliffs harbor hundreds of passages that offer glimpses into the distant past.
nature

Are the Great Outdoors Off-Limits During a Pandemic?

"Obey the f***ing law and do what public health authorities tell you to do."
science

A remarkable ancient technology and tradition that united communities in the Andes is fading into history.
plague

A look inside the Mediterranean trading power, courtesy of its hard-working 16th-century porters.
Video