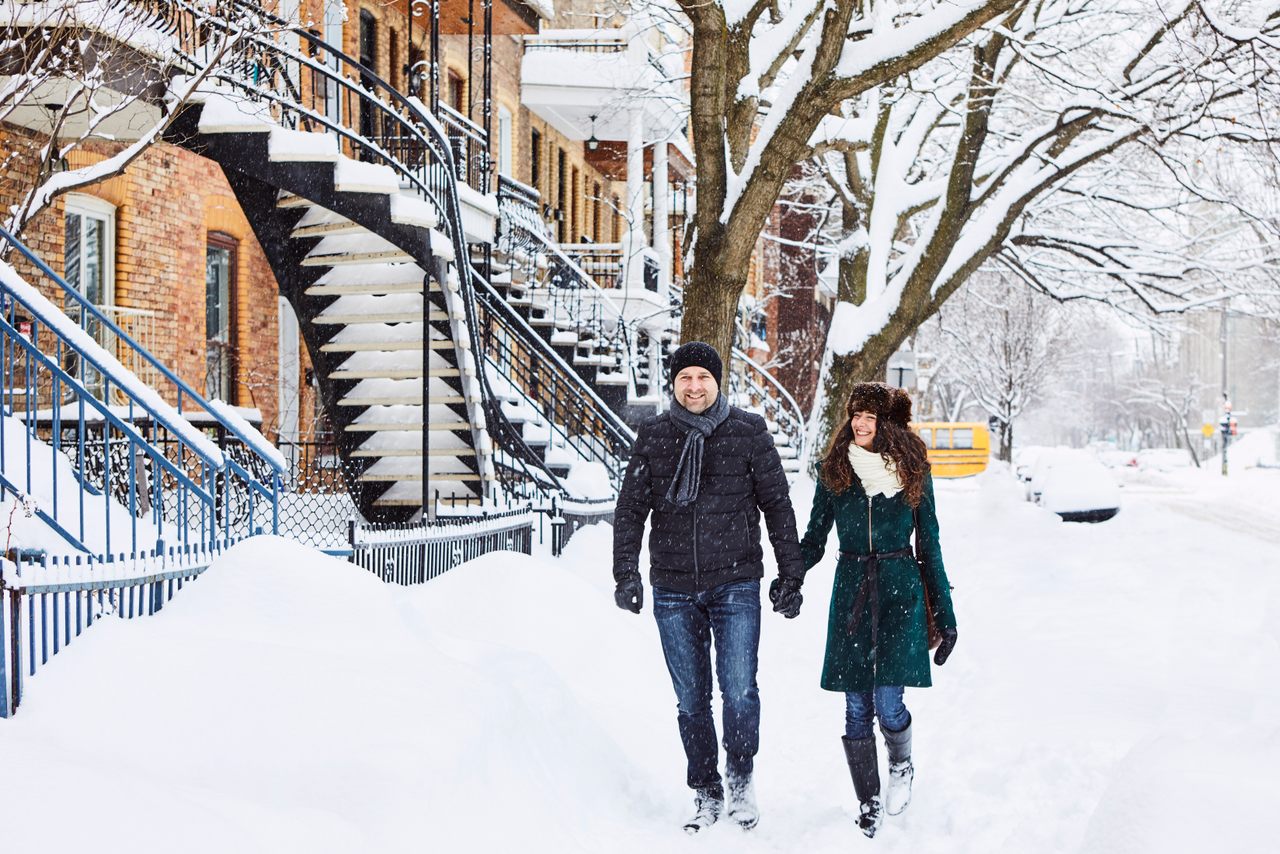 Historically, the outdoor staircases of Montreal make sense. Meteorologically, not so much. Maude Chauvin, Madore / © Tourisme Montréal
In This Story
Destination Guide

When it comes to weather, winters in Montreal, Canada, are often brutal. By December, temperatures plummet below freezing and snow falls regularly. Streets frost over, while dagger-like icicles form along railings and rooftops. Although sidewalks can be slippery, there’s one type of local attribute that’s considered particularly precarious during winter months.

Many Montrealers live on the upper stories of plexes—residential buildings with individual units stacked one on top of another, typically as duplexes and triplexes. It’s not the buildings themselves that are a cold-weather concern; it’s their defining feature that can be especially harrowing when it comes to snow and ice: external iron staircases that twist, turn, and climb steeply up the facade of each structure. Some consider them “deathtraps,” though they’re as much a part of the city’s fabric as Cirque du Soleil and bagels.

In fact, these highly visible flights of steps are considered cultural icons, even winning top spot as Montreal’s most iconic symbol in a 2012 survey conducted by the city’s Pointe-à-Callière museum. They’re prominent in older neighborhoods, just beyond Montreal’s downtown core, such as Le Plateau, Rosemont-La Petite-Patrie, Mile End, and Villeray. Some are straight, while others are L, S, and T shaped. Bumbaru’s own triplex features stairs that are symmetrical with its neighbor, resulting in a Baroque-style composition “like something you might find at France’s Château de Fontainebleau,” he says, “though simpler.” Walk along some blocks of Rue St. Denis, Avenue de l’Esplanade, and Rue Clark Street, and you’ll see similarly modeled staircases one after the next—a seemingly never-ending display of wrought-iron works.

The ubiquity of these staircases is due to the surprising convergence of a few seemingly unrelated factors.

Montreal’s plexes, which typically housed large, working-class families, began appearing in the city during the mid-19th century. This coincided with the arrival of British and Scottish immigrants who were accustomed to living in similarly styled residential units—one atop the other with independent access from the streets. By the early 20th century, the city was experiencing an unprecedented population boom of both Europeans and rural Quebecers, and these multiplexes became increasingly popular. At the same time, the city began to enforce regulations restricting the width of multiplexes. They also required that they be set back from the street, with enough room for a green outdoor space to exist in front of each building. To maximize what little interior space was left, builders started putting the staircase on the exterior instead. This also allowed landlords, who typically occupied a plex’s larger ground-floor unit and rented up its upper spaces, to save money on heating.

“The staircases are so steep to account for the fact that the land wasn’t that spacious,” says Marie-Pier Marchand, a planning architect for the city, “which make them a part of the trademark of Montreal.”

The Catholic Church also exerted its own moral influence, preferring the staircases’ transparent view of entering a house through public space, rather than a hidden common area inside the building, where mingling “could have been an issue,” says Marchand.

At the turn of the 20th century, Montreal was also Canada’s largest metropolitan center and an industrial town where metalworking was an art form. Skilled craftsmen took on the challenge of the city’s building restrictions, shaping iron into intricate swirls and tight angles while also leaving their own individual trademarks, such as railings decorated with loops, scrolls, and leaves. According to Bumbaru, some of Montreal’s earliest exterior staircases include a mix of cast iron and woodwork. “They often have a poetic form,” he says. “You can see that they’re made by hand, and by heart.” As the city grew, manufacturing companies eventually took over the bulk of the work, producing wrought iron staircases which lacked that handcrafted touch.

But while iron staircases were proliferating throughout Montreal’s working-class neighborhoods, the city’s upper-class residents considered them an eyesore. By the early 20th century, some parts of the city—such as the upscale sections of its tree-lined Outremont district—had already banned them outright. By the 1940s, the rest of Montreal followed suit, prohibiting the staircases on any new construction. Their reasons included pressure from the city’s elite, as well as the steep staircases’ inherent safety risk—especially prevalent during the city’s harsh, snow-filled winters.

However, as with San Francisco’s colorful Victorians and Brooklyn’s iconic brownstones, Montreal’s exterior staircases took on a life of their own in the decades that followed, becoming an essential part of the cityscape. By the 1970s, the rediscovery of what Bumbaru calls Montreal’s “urban vernacular,” coupled by an existence of empty narrow plots zoned for multiple housing, led the city to reauthorize them. With the newer plexes came sleeker and more stylish staircases that adhered to the city’s updated structural codes. “The stairs you see today,” said Bumbaru. “Sometimes they seem too perfect.”

These days, Montreal’s traditional plexes and their staircases are sought after for their uniqueness, though residents say they definitely come with their pitfalls, especially when trying to navigate the steep and twisty contraptions with a bag of groceries or, even worse, a bicycle. “Our staircases aren’t a commodity,” says Martine Venne, media manager at Tourisme Montréal and a plex co-owner, “they’re a preference. Sort of like a pool,” she said, “you either want one or you don’t.”

In March 2016, Venne purchased the top half of a 1927 duplex in the city’s Rosemont-La Petite-Patrie district, and with it came the staircase. She’s responsible for maintaining it, which includes replacing its parts, treating any rust, and shoveling its show in winter. The bulk of the city’s plex staircases would not meet Canada’s current construction codes, but Montreal has instituted bylaws that allow owners to maintain them in their original form. “You can’t just go to the hardware store and buy a few two-by-fours and some metal on the side,” said Bumbaru. In some cases, changes to the structures require a special permit and can cost thousands of dollars.

“We have a mission to convince people to keep these architectural components as part of the history and evolution of Montreal,” says Marchand. “Our bylaws help to prevent them making changes with some cheap assembled aluminum pieces they can buy at Lowe’s, and instead encourage residents to enhance these staircases to make sure they’ll be here through the next 50 years.”

Like many art forms, the staircases are what Bumbaru calls an “endangered species,” though he guesstimates that there are probably about 30,000 to 40,000 of them remaining throughout the city. “It’s a lot,” he said, “but this just means there’s a real market for repairs.”

Atlas Obscura readers shared the most remarkable collections of risers and treads that they've ever encountered.
Video • PinDrop