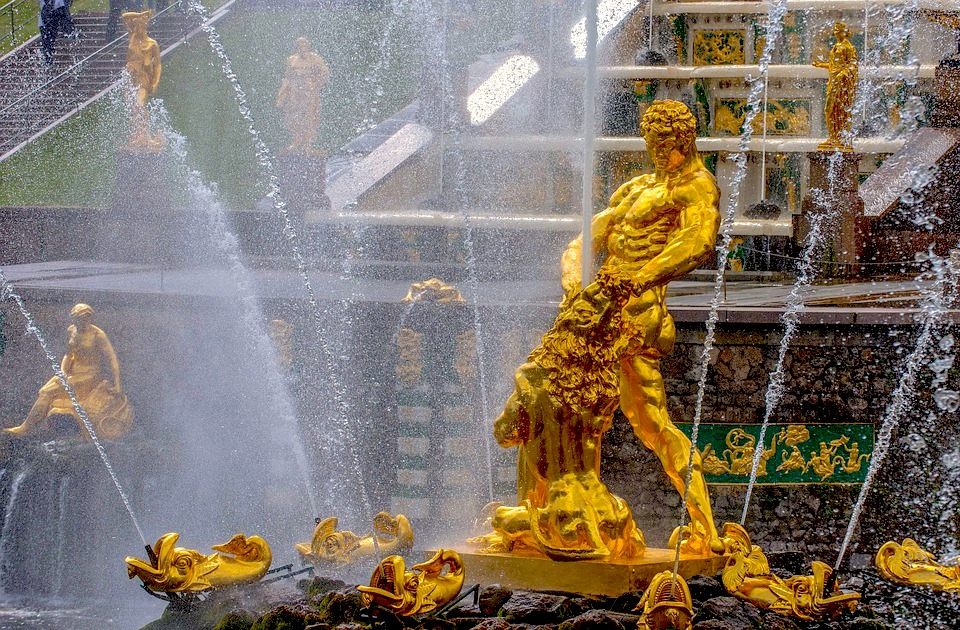 The Peterhof Fountains may be the least chill fountains. Oberlehner/Public Domain

During hot summer months, when the pavement is boiling and the air gets thick, a nice big fountain can be a perfect place to chill out and cool down. But at the same time, some of the world’s most appealing public fountains are, shall we say, not very chill in terms of design. Dramatic water features—whether they incorporate a mess of baroque statuary, fire streams of water high into the sky, or look like something from the far-off future—are often mesmerizing to behold. We recently asked Atlas Obscura readers in our Community forums to tell us about the most unforgettable fountains they’ve ever seen, and the responses were stunning.

Take a look at a selection of our favorite submissions below, and if you have an amazing fountain of your own that you’d like to recommend, head over to the forums and keep the conversation going!

“Recognize this bad boy?! Well, you should! It appears in Star Trek III: The Search for Spock. It’s called the Gilman fountain, and it’s on Occidental College’s campus in Los Angeles.” — Anne_Ewbank

“The Fasnachts-Brunnen by Jean Tinguely, a kinetic artwork in Basel, Switzerland.” — effka

“I also love the fountains at Witley Court in England, because they’re in a lovely garden, with a ruined manor house, which equals a magical visit.” — myra

“The Stravinsky Fountain, as its name implies, represents the musical work of Igor Stravinsky. I thoroughly enjoyed the whimsical magic of this delightful fountain in Paris next to the Center Pompidou.” — psundik

“The fountains at Longwood Gardens at Kennett Square, near Philadelphia are amazing. They’re influenced by the great fountains of Europe, built by Pierre DuPont in the 1920s. Longwood and its fountains are a must-see.” — sidraisch

“The Water Dome at Florida Southern College in Lakeland, Florida, was designed by Frank Lloyd Wright. When originally built, the pumps available to Wright weren’t powerful enough to create the dome-like spray he envisioned. It wasn’t until 2007 that the school, which boasts the largest collection of Wright structures, restored the fountain and outfitted it with sufficient equipment to realize Wright’s vision.” — jdoddtampa

“Do we count Villa d’Este as one? Because it could make a hall-of-fame just by itself.” — MisterCustomer

“Ever heard of the little town of Kaatsheuvel in The Netherlands? If yes, you will immediately say ‘The Efteling.’ And when visiting this fairytale amusement park, you will remember Aquanura for sure. Built around the Frog King fairy tale, it will leave you speechless.” — siejoenl

“All of the 48 publicly-owned fountains in Kansas City, Missouri! All are beautiful and this is just one example of the many fountains there!” — carmen333b

As glaciers and ice sheets keep dwindling, scientists are proposing everything they can think of.
sleep

In praise of an excellent idea with a long, complicated history.
vikings

To chill like a marauding Norseman, drop your sword and take up these ancient winter sports.
bars

At the South Pole, the freezer is just a hole in the wall to the ice outside.
Video • Wonder From Home