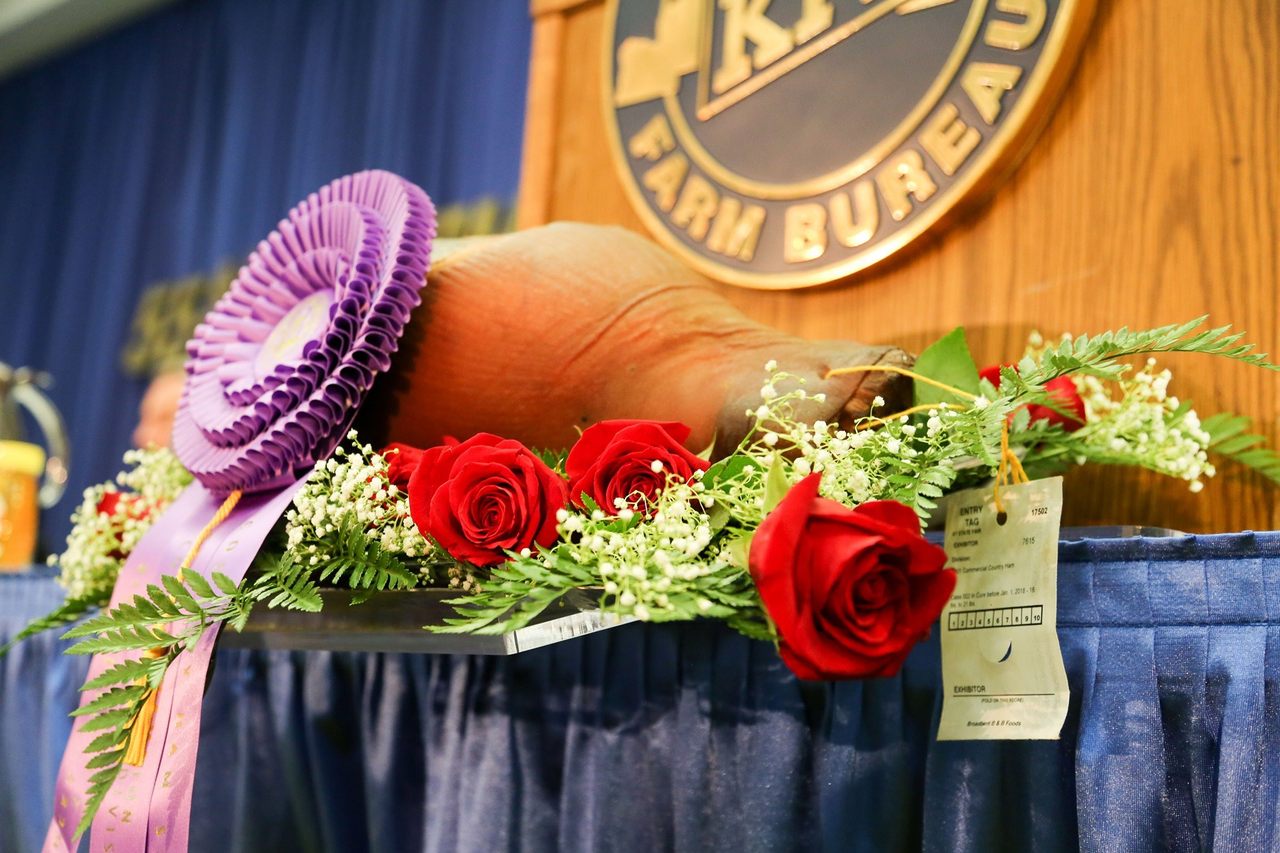 This little piggy went to the bank. Courtesy of Penn's Hams
In This Story
Destination Guide

Miss Kentucky sashayed around the room, cradling the State Grand Champion: a 16-pound, beribboned pinnacle of porcine splendor, laid out on a bed of roses. The winner of best ham at the Kentucky State Fair was about to be auctioned off to the highest bidder at the Kentucky Farm Bureau’s annual ham breakfast and auction.

Within seconds, the prized ham had reached bids in the hundreds of thousands. “Don’t stop to think now,” exhorted the auctioneer when the bids reached $900,000. “We left common sense long behind.” Just past five minutes into the auction, the ham sold for $1 million to Central Bank and the bank’s President and CEO, Luther Deaton. Deaton’s largesse in the face of award-winning cured meats has precedent: Last year he combined his own bid of $1.4 million with an equal amount from a competing bidder to buy the prizewinning ham for $2.8 million.

Some 1,500 attendees attended the auction on August 22 in Louisville, Kentucky, and listened to speeches by Governor Matt Bevin and Mayor Greg Fischer. In accordance with another beloved tradition, Miss Kentucky presented the ham to bidders.

Blake Penn, general manager of Penn’s Hams, which provided the Grand Champion ham, is still reeling from the shock and delight of the sale. “I think it figures out to $15,000 a slice, when you actually do the math,” he says. The local family business sells their country hams, which are salted, cured, and smoked over four to six months, for around $50.

Both companies and individuals enter their hams in hopes of being crowned at the fair. A judge evaluates them for symmetry, shape, color, and aroma, says Penn, using a metal probe to crack into the ham and smell it for richness. Occasionally the judge samples a microwaved slice. This is the third time Penn’s Hams has won the State Grand Championship, following wins in 1984 and 1999.

“I’m out here in a rural area trying to get our name out there,” Penn says of the recognition. “So it’s a big deal. It really means a lot.”

The rosy-hued house in Louisville, Kentucky, could be yours.
art

Feast Your Eyes on This Glorious Crocheted Food

From biscuits to cherry pie, these award-winning dishes tell family stories dating back to the 1800s.
Video • Wonder From Home

The grave of the iconic Kentucky Fried Chicken mascot features a bust of the man behind the goatee.
Kraków, Poland