These Mushroom Clouds Are Made From Actual Mushrooms - Gastro Obscura
Want to see fewer ads? Become a Member. 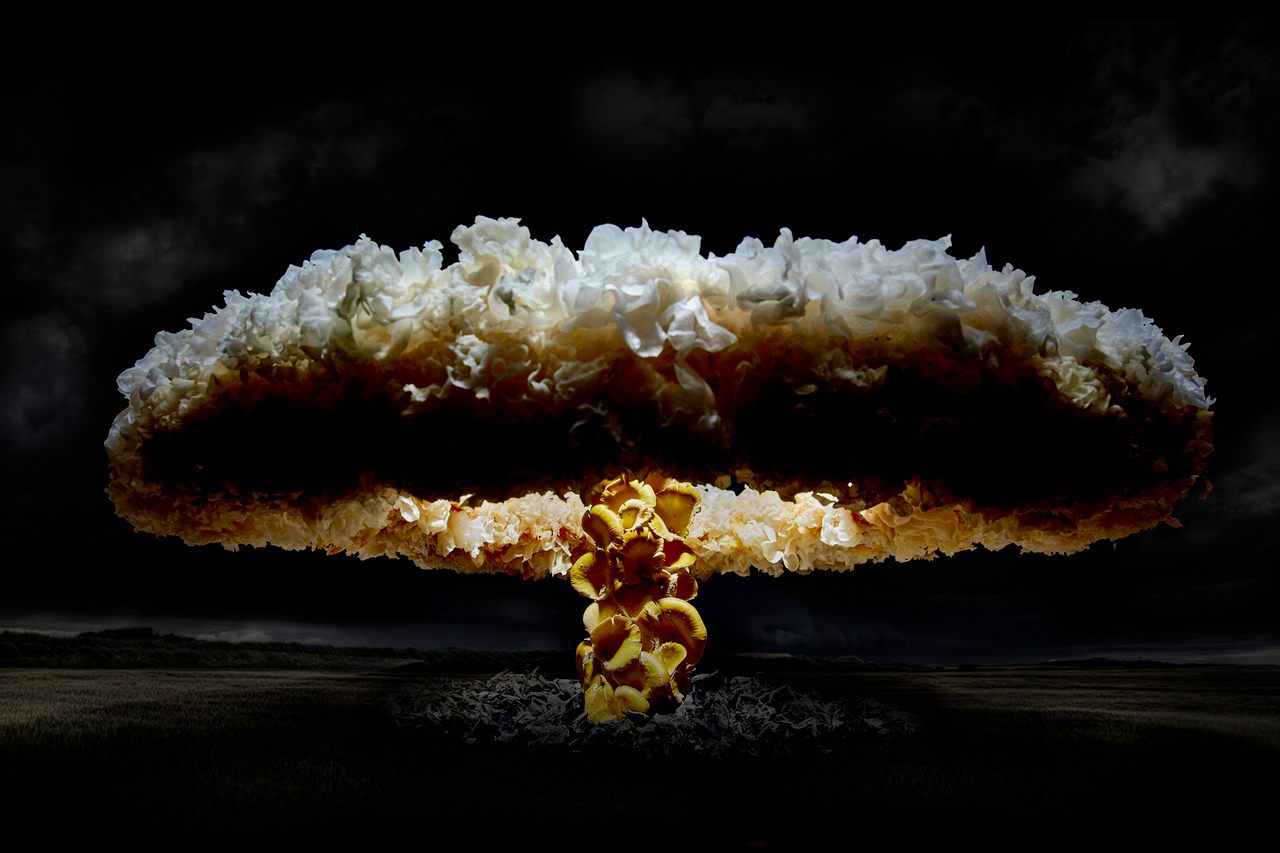 Photographer Henry Hargreaves plays with food often, especially the intersection of food and war. Previously, he transformed military rations into gourmet dishes—a project meant to accentuate the contrast between war fare and haute cuisine. But his current project has an even grimmer tone. Hargreaves is photographing delicate mushrooms as the ultimate symbols of destruction: mushroom clouds.

The roots of the project go back a few years to when Hargreaves collaborated with food stylist Caitlin Levin on a project for Forbes magazine. For an article on food systems, they built a mushroom cloud out of mushrooms. But the specter of nuclear war, Hargreaves says, is “more relevant now,” especially given the current chaotic state of global affairs. So they decided to make a series of apocalyptic mushroom photos.

If a nuclear war breaks out, the effects will be manifold. Constructing their mushroom clouds out of actual edible fungi reflects that. A nuclear attack would not only kill, it would affect both the ecosystem and local food sources for generations. Hargreaves imagines that the result could mirror the Fukushima disaster in Japan, where a tsunami caused meltdowns at a nuclear power plant. The radiation impacted local agricultural and food systems abroad. Hargreaves, a native New Zealander, is particularly aware of the anxieties around Pacific seafood that arose after the disaster. If a nuclear weapon was deliberately dropped on land, he says, it would be many times worse. “You’d have parts of a continent that couldn’t create food for a long time,” he says.

The project took around six months and 15 varieties of mushroom. One reason for the long time frame was that many mushrooms were only available during certain times of the year, and they needed different mushrooms for different effects. Wide, flat oyster mushrooms make up smooth cloud columns, while spindly enoki mushrooms form the frilly undersides. Hargreaves and Levin attached the mushrooms to styrofoam forms with glue or pins, and dramatically lit the clouds for apocalyptic effect before photographing them.

Each photograph portrays the different stages of a mushroom cloud. Starting with a wide ring of vapor, the cloud balloons up until the cap almost breaks away entirely. “A mushroom is often thought of as something that’s kind of quite cute,” Hargreaves says. “But here it is as probably the most evil device humankind has ever created.”

The Greenhouse Where Tomatoes Grow in Iceland

How do you feed eight billion people during a nuclear winter?
cemeteries

During a siege, desperation drove people to disinter skeletons from cemeteries.
food