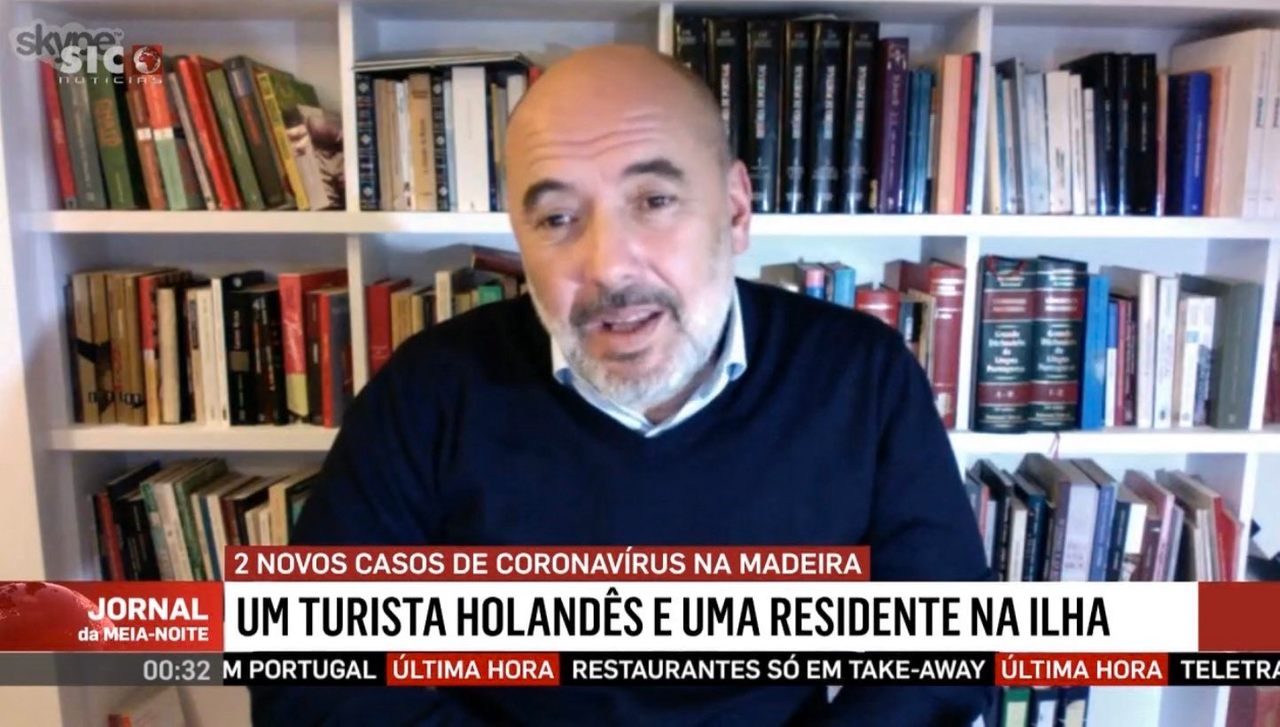 In late March, the satirist behind Uma Página Numa Rede Social, a humorous political analysis project based in Portugal, noticed a curious shift in the evening news. With offices closed due to the COVID-19 pandemic, the most sought-after politicos were Skyping into national television, just as the rest of us Zoom into staff meetings.

“We saw a paradigm shift taking place before our eyes,” the satirist says. (He asked not to be named because he fears retaliation for his political work.) As Portuguese analysts and media personalities put social distancing into practice and began sifting through the day’s events from the comfort of their home offices, “the previously sophisticated sets, where interviewers and interviewees competed for the audience’s attention with catchy chyrons and elaborated graphics, were replaced with the erudite backdrop of plain old bookshelves.” The evening news had joined the work-from-home movement, and just like that, the home offices of famous people went temporarily on public view.

It was hard not to notice the sheer number of books suddenly on display. Rather than bring in a potted plant or a sleek humidifier, commentators from every political tradition—almost all of them men, and most of them wearing scholarly-looking beards—chose to sit with their impressive home libraries, as though everyone on TV was competing for Portugal’s classiest, most library-esque bookshelf. Since no such competition existed, Uma Página became its unlikely host. The author of the page compiled some of his favorite home libraries into a Twitter thread, called it the 2020 Portuguese Bookshelf Championship, and waited for his audience to pass judgment.

As expected from a nation with one of the most beautiful bookstores in the world, the Portuguese rallied behind the Bookshelf Championship. All of a sudden, book-related opinions were all over social media. “He’s stacking books horizontally to fit more,” a Twitter user said of his preferred contestant, journalist Nuno Rogeiro, whose all-embracing bookshelf featured books wedged into every available cranny. Some contemplated the definition of a bookshelf: Should a shelf full of binders be disqualified, or was it a “spectacular variation” on the theme? Others called for the “immediate resignation” of the Minister of Education, Tiago Brandão Rodrigues, on the grounds that his video conference set-up featured zero books. It didn’t take long for the debate to make it, in an apt twist, onto the evening news. Ricardo Araújo Pereira, one of Portugal’s top comedians, submitted his formal entry by taking a conference call from a deserted university library, where he sat flanked by tidy bookshelves in perfect social isolation. Twitter deemed his entry “extremely strong.”

Jovem Conservador de Direita, an up-and-coming Portuguese comedian and unofficial spokesperson for extremely online millennials, was also quick to join the fray. “When the pandemic broke out, I myself was forced to buy a bookcase with books to be able to appear on live broadcasts,” he quips. “It’s hard to imagine that, after the pandemic, people will ever again trust commentators who do not appear in front of bookshelves.” Of course, says the anonymous founder of Uma Página, “It is fair to assume that not all have read the works they so proudly present behind them.” One center-right politician, Luís Marques Mendes, had a copy of The Communist Manifesto on the shelf behind him.

If we learned anything from Robert Kelly, the so-called “BBC Dad” whose live interview was famously gatecrashed by his children in 2017, it’s that social media loves a commentator who works from home. Another Twitter account, Room Rater, began poking fun at Skype backgrounds in April, and has already racked up more than 100,000 followers. There’s nothing quite like peeking into another person’s space.

But how does this natural curiosity play into Portugal’s sudden interest in the home libraries of famous people? There seems to be more than mere nosiness at play, Conservador de Direita says. A shelf crammed full of books is a shelf crammed full of knowledge: When the audience sees it, “it is as if they are absorbing the energy of those spines.” Short of being just bookshelves, these are symbols of braininess and authority: They suggest that we can trust what a person says, and perhaps even repeat it to our friends without sounding ignorant.

To get a leg-up on the supposedly better-read competition, Conservador de Direita has put together a humorous list of highly recommended quarantine reads. Among the featured titles are Infinite Jest by David Foster Wallace and Ulysses by James Joyce (distinguished bricks that will burnish any bookshelf and/or reputation), a travel book about India (for those who, prior to the pandemic, had booked Eat Pray Love-style journeys of self-discovery), and Strawberry Shortcake: Makeover Madness (where friendship and capitalism intertwine in a hokey, heartwarming tale). Peculiar choices for peculiar times, but maybe the point is to simply stay home and read. Really, has there ever been a better time to tackle that tsundoku?

The anonymous creator of the Portuguese Bookshelf Championship is happy that his comedic creation has caught on. “I tend to think anything that works as a silver lining in this bizarre era is more than welcome,” he says. “After all, we’re all locked up inside our houses, and we need things to help us kill some time.” It can be hard to watch the news these days, but at least the bookish backgrounds keep getting better and better.

Cartographic Puzzles Are Poised for a Comeback

The bookwheel helps readers browse eight texts at once. The only problem? It weighs 600 pounds.
libraries

Inside an annual contest of brains, brawn, and library logistics.
games

How text-based games are changing way we tell stories.
books

The Hidden Messages of Colonial Handwriting

Back then, penmanship was basically secret code.
Video