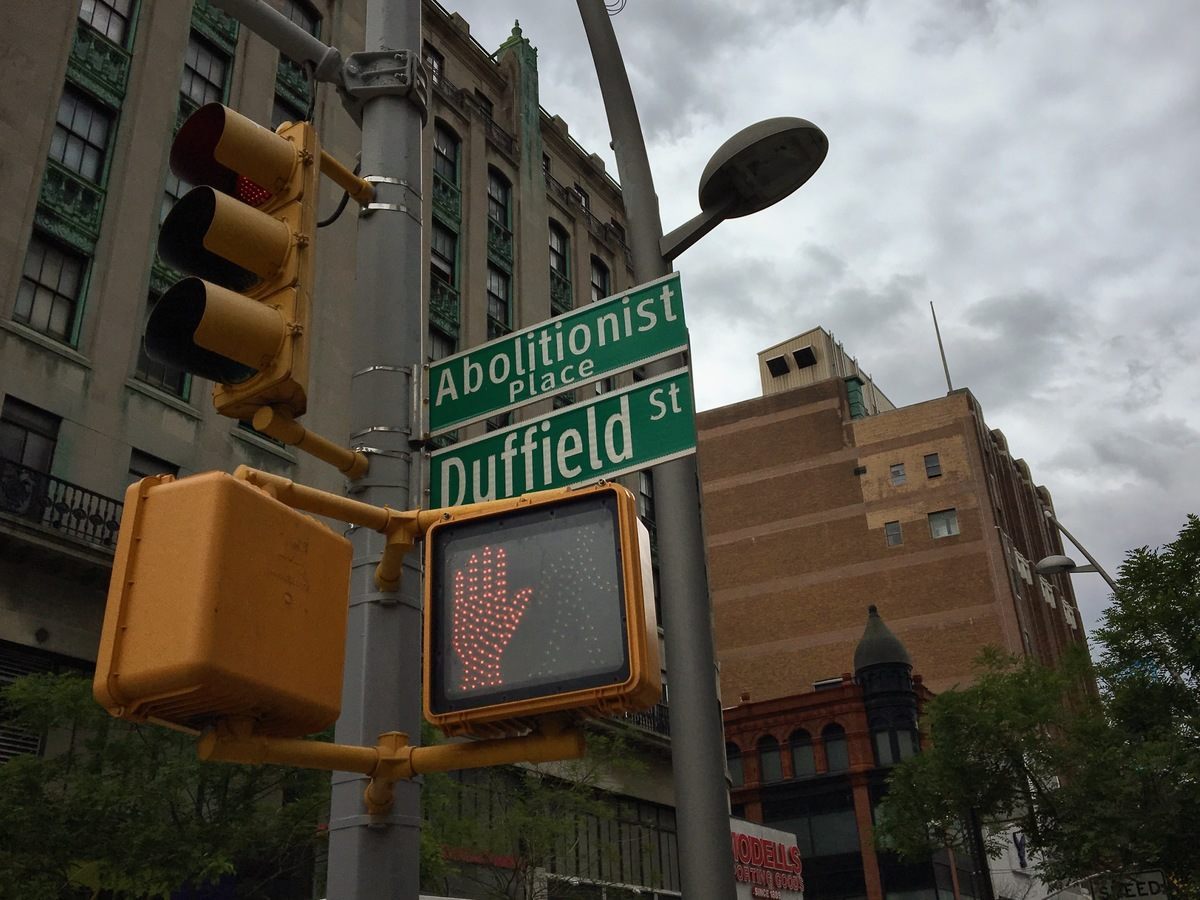 Duffield Street between Willoughby and Fulton Streets was renamed Abolitionist Place in September 2007. Courtesy Meggie Green
In This Story
Place

This block in downtown Brooklyn was a hotbed of antislavery activism along the Underground Railroad.
Destination Guide

Thomas and Harriet Truesdell knew what they were getting into. Like many Brooklynites today, they were transplants, having moved there from Rhode Island, into a small rowhouse on Duffield Street in Downtown Brooklyn. Unlike most Brooklynites today, they arrived in their 60s, having already established themselves as staunch abolitionists by 1841. According to some activists and historians, they may have done more in Brooklyn than merely speak out against slavery and host friends such as noted social reformer William Lloyd Garrison. Some say the Truesdells managed a stop on the Underground Railroad in a network of tunnels below their home.

In the 1850s, much of the North was behind the abolitionist movement. Some states passed legislation to undermine the Fugitive Slave Act of 1850, which was enacted to facilitate the return of those who had escaped slavery to their owners. Despite being in a free state, New York City teemed with slave catchers and kidnappers, says Eric Foner, a historian of 19th-century America at Columbia University, and these people were known to even grab free African Americans off the city’s streets and sell them into slavery.

“Like all of America, New York City’s relationship to human slavery is more complicated than commonly taught, but the rise of abolition sentiment and activities in the first half of the 19th century was very important to the eventual demise of slavery in our country,” says Simeon Bankoff, executive director of the Historic Districts Council, a nonprofit preservation group that often works with city agencies to establish historic districts. “As a singular reminder of this courageous act of defiance, the Truesdell House at 227 Duffield Street should be protected and preserved so that future generations of New Yorkers can learn the enduring importance of political activism.”

But the survival of this historic home isn’t assured. An application to demolish the home was filed in June, though no date has been set. The Brooklyn Eagle reports that the city’s Landmarks Preservation Committee is currently reviewing an application to recognize and save the building.

Because New York wasn’t entirely safe for African Americans, Underground Railroad stops appeared throughout the city. The Truesdells’ building is now the last residence from the era on Duffield Street, which was conamed Abolitionist Place in 2007 to commemorate the number of anti-slavery advocates who called it home. Since then, building after building on the street has been swallowed up by development, and the house now sits between a high-rise hotel and a lot that will become Willoughby Square Park. Its most recent resident, Joy Chatel, whom everyone called “Mama Joy,” led the fight for the building’s preservation for over a decade, notably fending off the city’s claims of eminent domain 12 years ago. Since Chatel died in 2014, local activists, including her daughter, Shawn Lee, and the grantmaking organization the Circle for Justice Innovations, have taken on the task.

Some preservationists think that the Truesdell house should be preserved regardless of any confirmed link to Underground Railroad, because verifying whether homes were ever actually used as stations of the clandestine network is often a matter of teasing truth from legend.

“The level of success of the Underground Railroad was by nature more effective the better it retained its secrecy,” says Jacqueline K. Dace, deputy director of the National Underground Railroad Freedom Center in Cincinnati, Ohio. “That poses a problem for historians attempting to document the places and spaces that were a part of this system.”

As such, in 2007, a city-contracted archaeological firm, AKRF, did not find “conclusive proof” that 227 Duffield was a stop on the Underground Railroad. According to Brownstoner, AKRF says documents suggest the structure was built between 1848 and 1850, though other records at the Brooklyn Historical Society suggest the Truesdells had a home in Brooklyn as early as 1841. The firm’s report did not stop calls for preserving the structure, which is the last of its kind—associated with the abolitionist movement in any way—on a street named for that work.

“A more complex story can never be told,” says Dace, “if it is not researched and preserved.”

In 1892, a newspaper described a cave that sheltered 21 formerly enslaved people. Ohioans are still looking for it.
ruins

A family history, from Sierra Leone to South Carolina, 250 years in the making.
Video • AO Docs