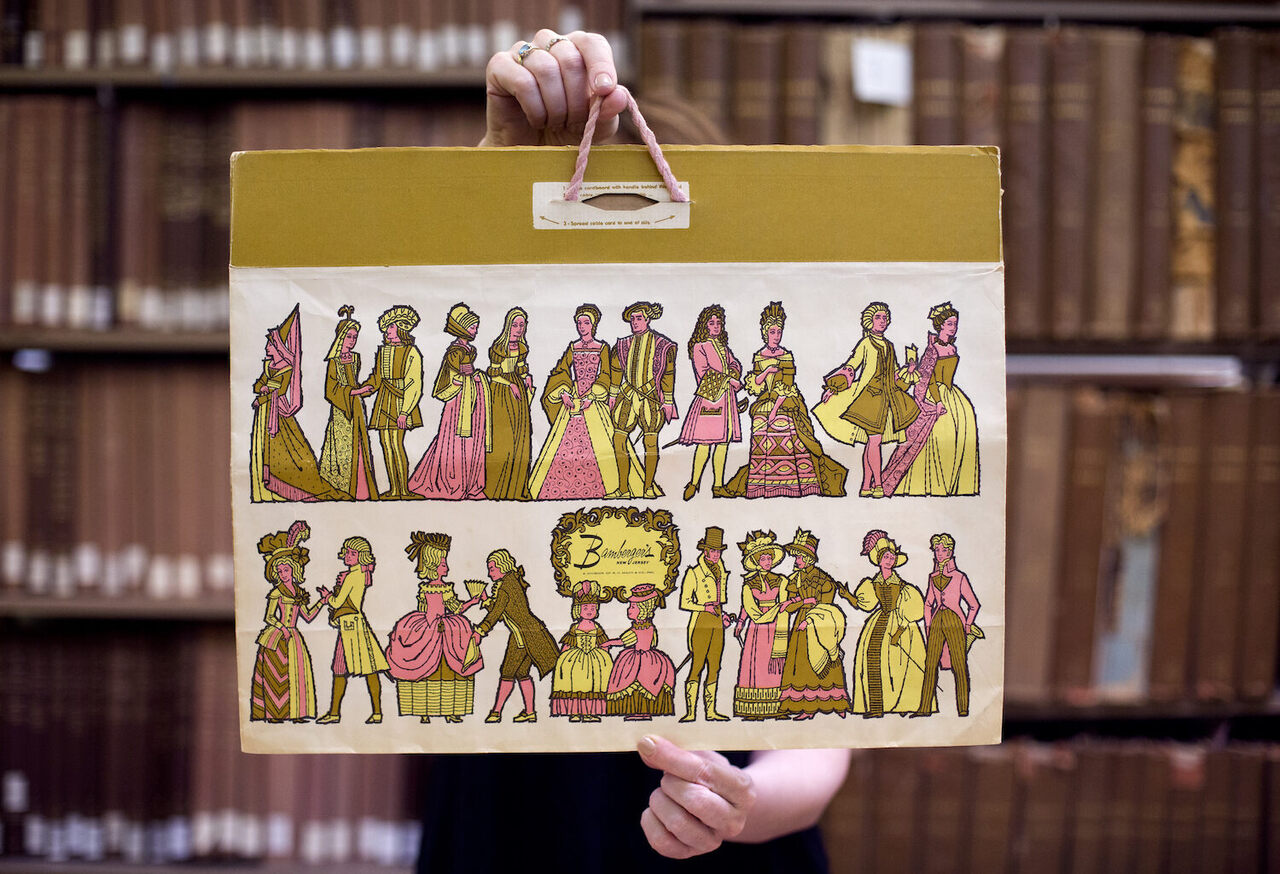 The Newark Public Library in Newark, New Jersey, has an unusual collection that can’t be found in its stacks. Stored in the library’s Special Collections department, in one filing cabinet and 61 archival Solander boxes—some of which are so full their latches barely close—are over 2,000 shopping bags. Meticulously cataloged by geographic location, size, and theme, the collection records the history of graphics, culture, and everyday life from the mid-20th century to the current day.

Like most great collections, it owes its existence to the foresight and enthusiasm of its initial curator, the former librarian, William J. Dane. Dane, who referred to himself as the library’s “Keeper of the Prints,” started the bag collection in 1976. Dane was also responsible for the institution’s other paper collections, a mesmerizing trove of ephemera including travel posters, greeting cards, wallpaper, menus, autographs, pop-up books, and more.

According to Nadine Sergejeff, current Special Collections and Digital Initiatives Librarian, Dane was a great admirer of graphic design who “loved ‘fun’ collections and he greatly enjoyed selecting and showing these bags for others to appreciate.” Sergejeff says the collection was acquired and grows through a somewhat informal, grassroots effort: “Most were donated by staffers, patrons, and collectors throughout the country. We continue to receive gifts to this day.”

The bags are as much a record of what is no longer here as what is, and they tell some especially poignant stories about the history of New York and New Jersey in particular.

One of the most iconic bags is from Bonwit Teller, a now-defunct department store that was a glamorous anchor of the 20th-century Fifth Avenue retail scene. Its signature bouquets of violets were a common sight to anyone who lived on the East Coast, appearing on everything from the store’s hat boxes to its charge cards. Also familiar to New Yorkers of a certain era is the story of how the company’s Art Deco Manhattan location was demolished by Donald Trump in 1980 to make way for Trump Tower. Although Trump promised to preserve a pair of the building’s Deco female reliefs for the Metropolitan Museum of Art, the panels were destroyed, the developer notoriously claiming them to be “without artistic merit” and ultimately too costly and time consuming to save.

Of a similar time and place is a bag from restaurant La Côte Basque, a legendary Manhattan eatery known less for its food than for its immortalization by the author Truman Capote in his unfinished novel, Answered Prayers. The restaurant, a clubhouse of sorts for the city’s most prominent society ladies, served as the setting for “La Côte Basque,” a chapter of the book in which Capote betrayed the confidences of the women with whom he routinely dined. Excerpted by Esquire magazine in November 1975 under the title “La Côte Basque, 1965,” the short piece ended most of the friendships Capote so professed to enjoy and was thought by many to have directly contributed to his personal and professional demise.

A brightly colored Christmas bag featuring a partridge in a vibrant pink-and-green pear tree from the once-thriving Arnold Constable department store tells the story of a golden age in New York’s retail history. At the time of its closing in March of 1975, it was considered New York’s oldest department store, having opened in 1825. Although it would occupy space in several locations over its run, in the late 1800s it was located in the heart of what was then known as “Ladies’ Mile,” a shopping district that catered to the “carriage trade” (basically, wealthy consumers brought to the area by carriage). The building occupied by the Constable store still stands, its imposing mansard roofs a favorite among Instagrammers.

Also under the category of local history is a bag from Bamberger’s, a department store that opened in Newark in the 1890s, barely a mile from the library. Known for dramatic publicity stunts, the company purchased a plane in 1919 to make deliveries, a wildly unusual service at the time. The first shipment was a bag of silverware delivered via parachute. Later the plane would be used to drop off an actual passenger from New York for a shopping day at the Newark store.

As remarkable as the store itself was its founder, Louis Bamberger. According to Michael J. Lisicky, author of Bamberger’s: New Jersey’s Greatest Store, Bamberger sold the business to R.H. Macy & Co. on June 29, 1929, four months before the stock market crash. Although the exact amount of the sale is still unknown (figures range from $25 million to $50 million), what is known is that Bamberger was paid in cash. In September of that same year, on Bamberger’s last day of work, he called in 235 of his longest-serving employees (minus any executives) and distributed $1 million among them.

Also a notable item in the collection is a 1986 Bloomingdale’s bag with a graphic by Mark Kostabi, a painter and sculptor with a somewhat controversial place in the history of art. Known for openly lauding his assembly line method of painting—his staff created the work, and he signed each piece at the end—Kostabi marketed himself as much a branding genius as an artistic one, making him a perfect fit for a store known for its branding (the library has no less than five full Solander boxes of “Bloomies” bags). He incorporated many of his trademark, surrealist designs in the bag’s design: faceless hat-wearing figures, everyday objects, and, of course, his signature on the bottom.

But it wasn’t just Kostabi: The history of pop culture is represented here in so many ways. One stand out is a bag that refers to John Lennon’s “Bag One Portfolio,” a series of provocative lithographs Lennon created in 1969 for his then-new bride, Yoko Ono. Illustrating the famous couple’s wedding and honeymoon as well as their legendary “Bed-In,” the collection of sketches caused a controversy when first exhibited at the London Arts Gallery in January 1970. Considered indecent, eight of the 14 doodles were confiscated by Scotland Yard on the second day of the exhibit. Originally packaged as a set in a plastic valise-type bag (which the library does not have in its holdings), today the lithographs are coveted by serious art collectors and are part of the permanent collection at New York’s Museum of Modern Art.

Just across the river from the library, Henri Bendel and Lord & Taylor, two of the last surviving grande dames of American department store history, have announced the imminent shuttering of their Fifth Avenue flagships, ending a combined 315 years in trade. Like so many other dozens of establishments represented in the library’s boxes, their bags will soon become part of the past rather than the present. And once they do, these seemingly mundane objects will leave us to find clues about the tastes and standards of the eras in which they were used. While they may not unlock the key to language like the Rosetta Stone or the mysteries of an ancient world like the pyramids, they certainly teach us to see history in the ordinary.

But they quickly forget the smells of their own nests.
shoppinglibrariesdesigncollections

The bookwheel helps readers browse eight texts at once. The only problem? It weighs 600 pounds.
libraries

Let Your Mind Wander With These Gloriously Detailed Maps

Satisfy your urge to roam and while away some time with these picks from cartographic collectors, curators, and scholars.
objects of intrigue

Book waste can be beautiful.
Video

A librarian with a love for eBay built this trove of culinary history.
Read more
Thanks for sharing!