For Sale: A Quaint Building Straight Out of a Norman Rockwell Painting - Atlas Obscura
Want to see fewer ads? Become a Member. 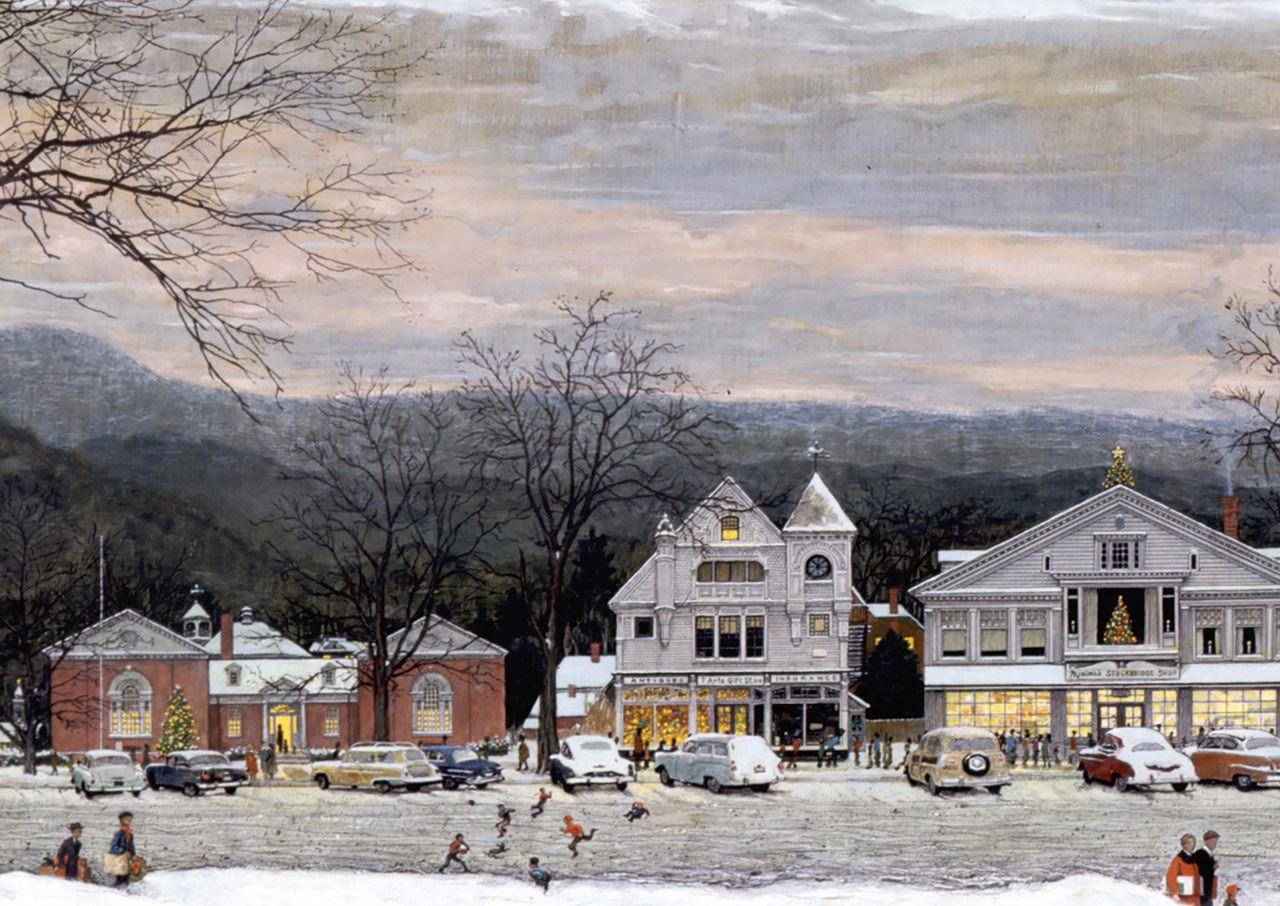 Stockbridge, a town in the Berkshires of western Massachusetts, is a picturesque place to celebrate Christmas. When Norman Rockwell painted the town’s Main Street festooned for the holidays, he made it look dreamy and cozy: Amber light spills out of windows, smoke puffs from chimneys, bundled-up shoppers wander past. There’s an evergreen tree strapped to the roof of a car, and the sky darkens gently above the hills in the distance.

Rockwell’s painting, “Stockbridge Mainstreet at Christmas (Home for Christmas),” was published in McCall’s magazine in 1967. More than 50 years later, Stockbridge still embraces its past. Rockwell lived and worked in town—in the painting, a Christmas tree stands aglow in one of his studios, a second-floor space above the market—and today, Stockbridge is home to the Norman Rockwell Museum. The yuletide scene, one of the stars of the collection, is locally beloved. The Red Lion Inn, at the far right of the painting, is still open, and has reproduced Rockwell’s image on its brochures. Each December, the Stockbridge Chamber of Commerce leads the town in a re-creation of the scene, with a festival that convenes carolers and several dozen antique cars. They even tie a Christmas tree to one of the roofs. Now, one New England enthusiast can step into Rockwell’s world and stay there year-round, because a building in this storied row is up for sale.

When Rockwell painted Stockbridge at Christmas, the building at 44 Main Street—second from the left—advertised an antique shop and insurance office, in addition to the 7 Arts Gift Shop, which still sells records, memorabilia, and and tschotskes. Decades on, the exterior of the three-story Victorian structure, built in 1870, still looks much the same, with colorful stained glass and decorative wood details.

“To say the property is iconic would be an understatement,” Steven Weisz, one of the property’s listing agents with William Pitt Julia B. Fee Sotheby’s International Realty, told Boston.com. “You can buy posters, lamps, and Christmas ornaments with the likeness of the building.” Those trinkets are surely worth less than the $1,795,000 that the building is listed for, but hey—if you’ve got the money, might as well opt for the real thing.

Though the painting is recognizably Stockbridge, Rockwell also drew inspiration from elsewhere, and took a bit of creative license with the details. The golden storefronts reference his jaunts in the Dutch city of Delft, where he was impressed by light beaming from windows, and the way the tones varied from one to another, says Tom Daly, curator of education at the Norman Rockwell Museum, where the painting is on view.

Rockwell tinkered with the layout, too. “Certainly, he altered our Main Street to make it look more like a Main Street,” says Daly. The painter nudged the buildings to be closer together and nestled them along a straight line; in reality, some sit closer to the street, and others hang farther back. Rockwell also flattened the scene, so a viewer sees all of the buildings at once. And then there are those gently rolling hills. “There are no mountains behind Main Street,” Daly says. “Stockbridge was settled because it was a flat area.” In western Massachusetts, Daly says, the hills run north to south—not east to west, as the painting suggests.

But the effect is comforting. Locals are tucked into warm clothes; the town is cradled snugly in a valley. Daly suspects that some of the painting’s popularity stems from the little details—glowing windows; doors slightly ajar; conversations in progress, with room for a viewer to imagine joining in. In sum, they suggest that this is a place where you’d be warmly welcomed. Rockwell had tremendous affection for the town: He once called Stockbridge “the best of America, the best of New England.” The Stockbridge in the painting doesn’t look exactly like the town, then or now, Daly says: Even decades ago, the stretch wasn’t so sleepy that kids and dogs could safely roughhouse in the street. Instead, he says, “It gives you that sense of a Main Street the way you’d like it to be.”

The regrettably named Posbury Clump could be yours for just $60,000 and change.
objects of intrigue

Another reminder that covers can't be trusted.
Video

9:24
Want to see fewer ads? Become a Member.
From Around the Web
THE GASTRO OBSCURA BOOK
Taste the World!
An eye-opening journey through the history, culture, and places of the culinary world. Order Now