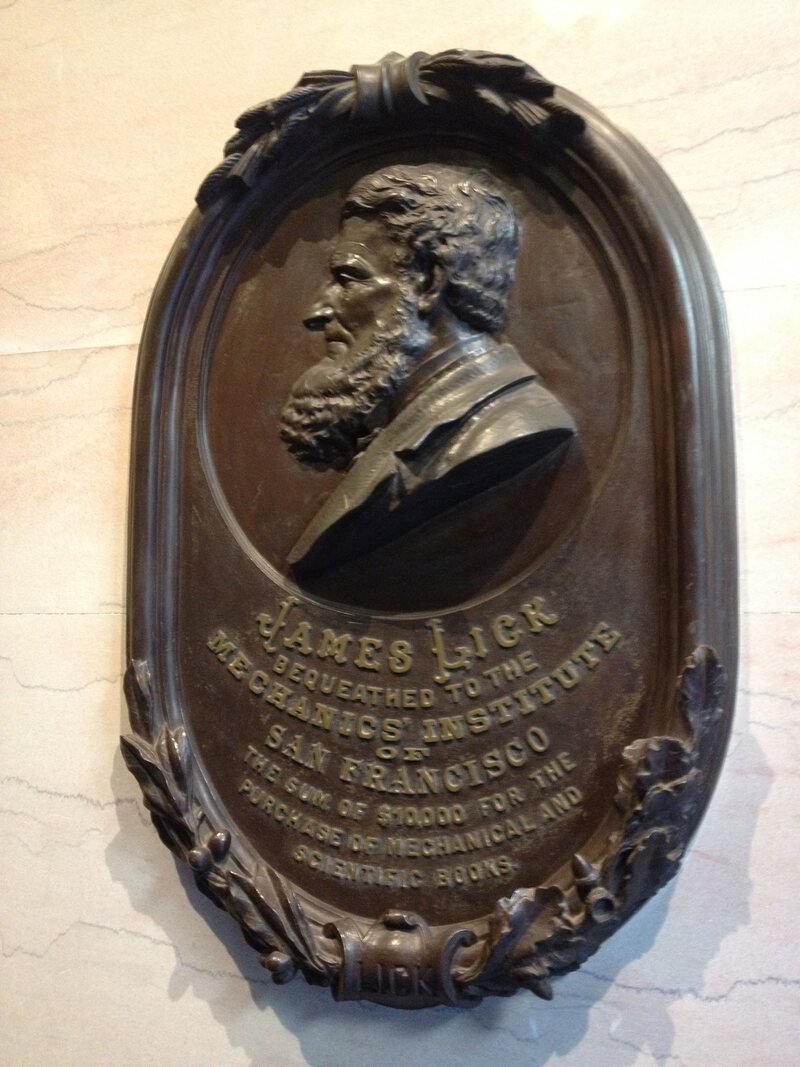 Much of San Francisco’s early history is defined by the two matched forces of destruction (earthquake and fire, after fire, after fire) and the generosity of remarkable — and remarkably wealthy — individuals. James Lick was one of these remarkable men whose life in the Bay Area left a lasting legacy to this day.

Lick arrived in San Francisco on the cusp of the Gold Rush in 1848 with a modest fortune, and quickly found his stride in the booming west. At the time of his death in 1876, he was the wealthiest man in California, and he left the majority of that wealth to fund numerous projects and buildings in his beloved Bay Area. Because of James Lick, we now have the extraordinary Conservatory of Flowers, the Lick Observatory in San Jose, as well as dozens of smaller monuments and institutions that benefited from his largess. 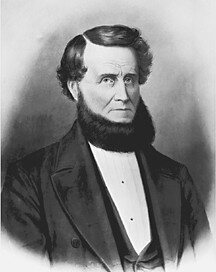 The century and a half old Mechanics’ Institute in San Francisco was one of the recipients of funds from James Lick. A remarkable story of survival, the Institute also had its start in the Gold Rush era as a working man’s alternative to the bars, brothels, and gambling dens of the Barbary Coast housing a library, reading lounges, and a chess room. Like most of the old city, the Institute and its collection were all but destroyed in the fires that followed the April 1906 earthquake.

From the rubble, a few surviving items were pulled, including the bronze bust commemorating James Lick’s contribution to the early success of the Institute, which, we are delighted to report, rebuilt and has remained as strong as ever in the century since the great fire. 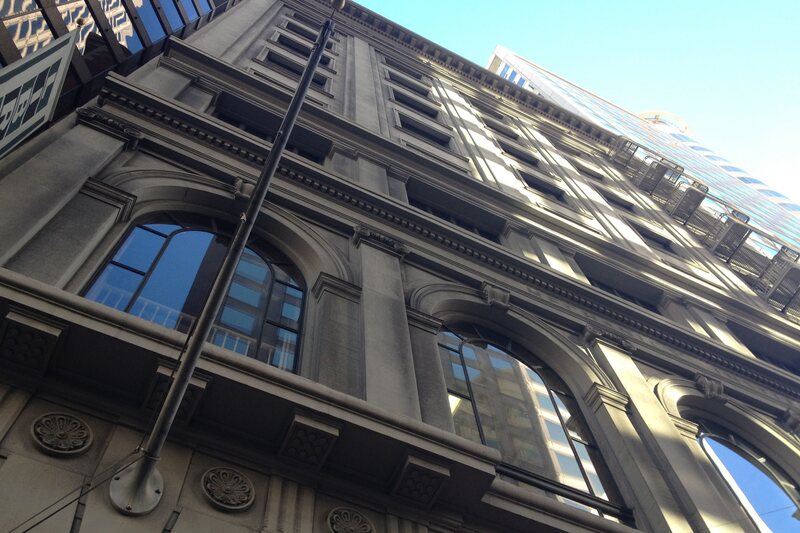 Taryn Edwards of the Mechanics’ institute shared its remarkable story of survival with us:

One of the first things one sees upon entering the beautiful landmark building of the Mechanics’ Institute is the bronze bust of James Lick. James Lick was a wealthy land owner, carpenter, and millwright who had come to our aid several times between 1855 and his death in 1876. He bequeathed the Institute $10,000 for the purchase of scientific and technical works. The directors of the Mechanics’ Institute were so impressed with this donation that in 1896 they commissioned the bronze bust, designed by local sculptor Francis Marion Wells and cast by Messrs. Louis De Rome and Neil Whyte of the Globe Brass and Bell Foundry, to hang in our lobby as a memorial and testament to Lick’s generosity and commitment to the mechanics of this city.

This was not the first time Wells had sculpted Lick’s likeness. In 1890 when the James Lick Trust was considering the erection of what is now known as the Pioneer Monument (located across from City Hall, near the Asian Art Museum and the Public Library on Larkin Street) Wells submitted a design that consisted of a group of statues, commemorating different periods of California’s history, surrounding a pillar upon which was fixed a bust of James Lick.

Though Wells did not win that commission (the winning design was created by F.H. Happersberger) his loss may have been our gain — using the same model, we secured our bust for only $250. A copy of the bust was also installed in the Academy of Sciences building which at that time was on Market Street (this building was destroyed in 1906).

Originally bolted to the wall in 1896, our bust survived the earthquake and fire of 1906 to the astonishment of our members and directors. This was a small miracle because our building (also on Post Street) and entire library collection, save the contents of a bank vault, did not survive and looting was rampant in the hours after the quake. Once our new building was finished, now at 57 Post, the bust was replaced on the wall of our lobby in 1912.

The bust is four feet high by 31 inches across and the design consists of the head of the great philanthropist surrounded by an oval framework, with a spray of laurel leaves at the top and oak leaves at the bottom. Just below the bust is this inscription:

James Lick
Bequeathed to the Mechanics’ Institute
of
San Francisco
The sum of $10,000 for the
Purchase of Mechanical and
Scientific Books. 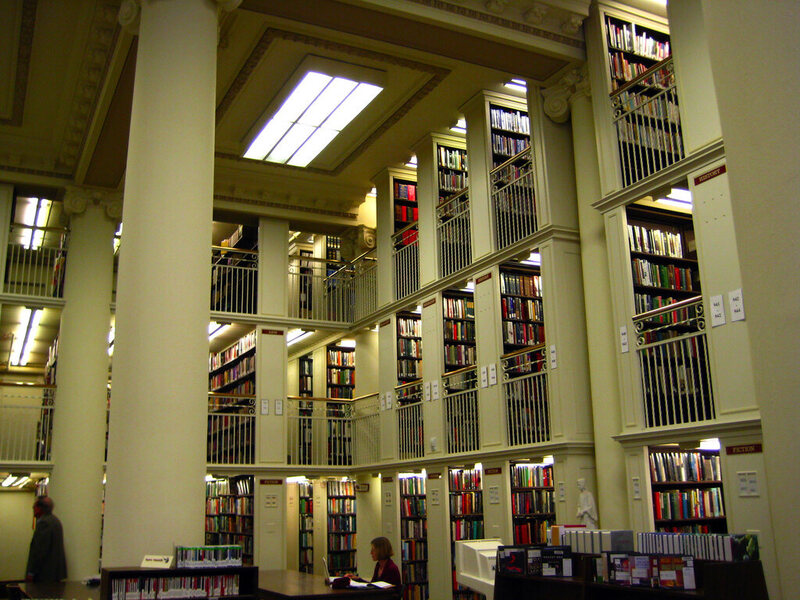 Taryn Edwards is the Member Relations and Marketing Specialist, Librarian, and unofficial historian for the Mechanics’ Institute of San Francisco. She is interested in the rise of technical education in the west and is currently researching the life of Andrew Smith Hallidie, who is important for far more than just inventing the cable car.

SEE IT FOR YOURSELF: MECHANICS’ INSTITUTE, San Francisco, California

To visit the James Lick Bust come to the Mechanics’ Institute at 57 Post Street between Montgomery and Kearny.

The Lobby of the Mechanics’ Institute is open Monday through Friday 9-9 and on weekends 9-5. While the Lobby is open to the public, the Mechanics’ Institute, consisting of the oldest library on the west coast and the oldest continuously operating chess club in the United States, is a membership organization. If you would like to visit the Institute, including the Library, Chess Room and events center, please consider taking our free tour offered every Wednesday at noon.

Atlas Obscura is on Tumblr!