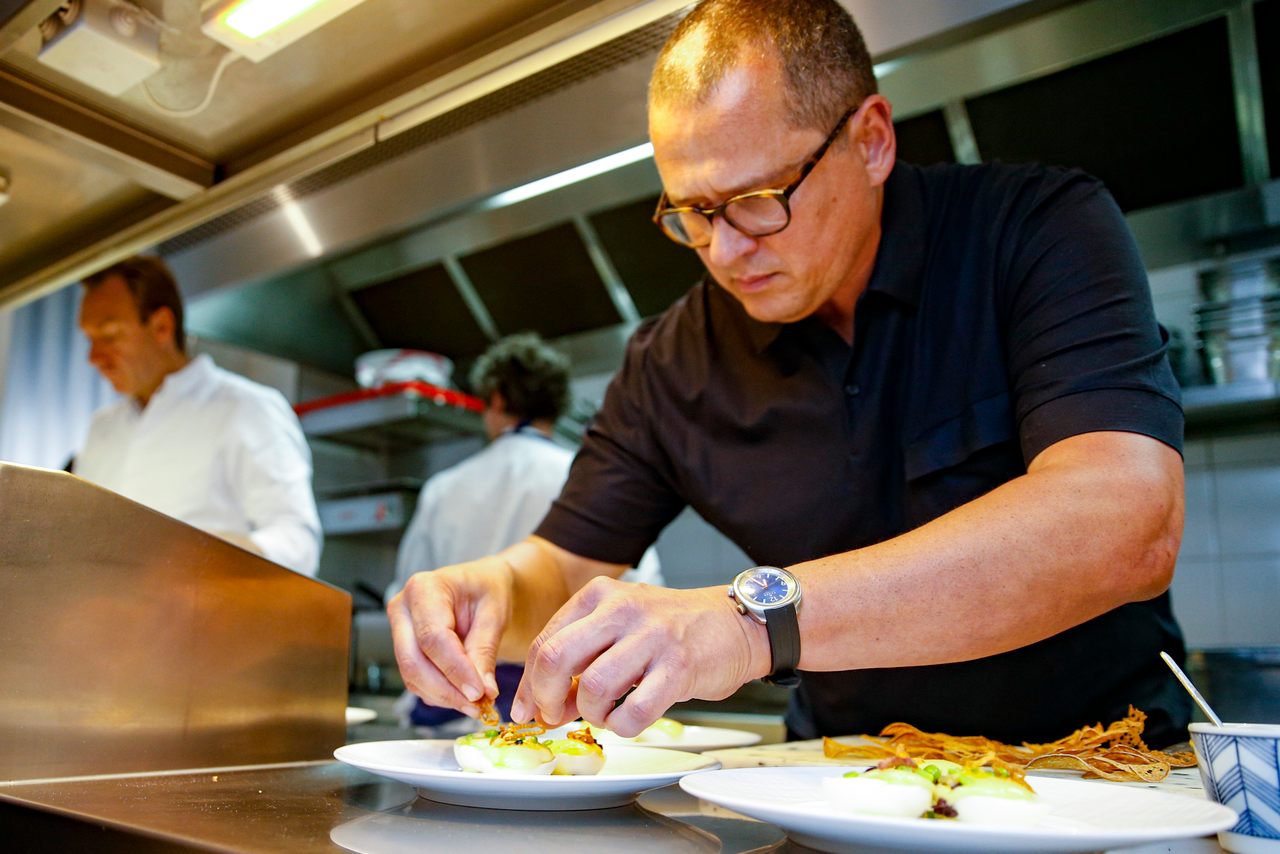 A competitor in the Oeuf Mayo World Championship in 2018. Getty Images/Geoffroy Van Der Hasselt/AFP
In This Story
Destination Guide

On November 22, 2021, 13 chefs flanked by their trusted kitchen brigades gathered at Ground Control, Paris, to compete in the third annual Oeuf Mayo World Championship. A French bistro classic, oeuf mayonnaise consists of a hard-boiled egg cut in half and then dolloped with mayonnaise. Some pre-assembled the dish in their respective restaurants, while others intentionally put on a show of spooning perfectly perky mayonnaise upon just-cooled eggs before the 300 or so spectators’ starving eyes.

Over the course of several hours, each competitor would serve their twist on oeuf mayonnaise to the judging panel comprised of Paris’ most revered chefs for a blind taste test. By the end of the day, two competitors were crowned the Champion and Vice-Champion. The organizer of this curious spectacle was none other than L’Association du sauvegard de l’oeuf mayonnaise, or The Egg Mayo Protection Association.

Oeuf mayonnaise is a wonderfully French dish that really only makes sense within the confines of a Vichy table-clothed bistro. Consisting of little more than egg-on-egg, traditionally with only a single lettuce leaf and a sprinkle of chives as garnish, the dish officially entered French culinary lexicon in 1906, when a recipe for it was featured in the homemaker’s handbook Eggs, 1000 ways to prepare and serve them.

With its low price point, oeuf mayonnaise was quickly embraced as the star hors d’oeuvre of French bistros—dining institutions which were historically the canteens of the working-class migrant populations who arrived in Paris on the heels of the Industrial Revolution. Le Voltaire, a formerly modest bistro gone upscale, continues to price its oeuf mayonnaise at the same price as when it first appeared on the menu in 1956—a meager €0.90. So popular was the dish that, during food shortages engendered by World War II, it was pedaled on the black market for 150 francs a serving.

In the 1980s, the humble bistro declined in popularity as precision-driven minimalist gastronomy came to dictate the French culinary scene. In an interview with Le Figaro, the celebrated French food critic Claude Lebey explained that by the end of the decade, “bistros were losing their wings.” The number of bistros across France fell from 200,000 in 1960 to less than 34,000 in 2019. As for the bistro’s emblematic dish? Fitness fads of the 1980s vilified eggs as the cause of all cholesterol problems and so oeuf mayonnaise was the first item to be cut from the menus of struggling bistros.

Lebey dedicated his entire 1987 restaurant guide to the revival of the bistro, with a call for it to be rightly recognized as a bastion of the country’s rich culinary institutions. For the food critic, oeuf mayonnaise was central to the working-class bistro cuisine he sought to revive and he grandly declared it “as indispensable to cuisine as the paperclip is to the office.” So in the 1990s, he created the Egg Mayonnaise Protection Association to protect the bistro’s beloved dish from extinction.

Although Lebey retired from the cause in 2013, his grandson Vincent Brenot, along with three friends, took up arms in 2018 and revived the Association under the catchline: “Le temps passe mais les oeufs durent.” (“Time passes but eggs remain”—a clever play on oeuf dur, hard-boiled egg, the base of the dish.) What was meant to be a bit of fun between friends quickly exploded into a community of 500 or so amateur cooks, chefs, and other figures from the restaurant industry. The co-founders decided to issue each member a card entitling them to a free oeuf mayonnaise at the restaurant of the previous year’s Champion.

Formalizing the annual competition started by Lebey, the co-founders laid out the judging criteria in an official ‘Egg Mayo Charter.’ It begins, “the egg mayo must use a large chicken egg, cooked to a point so that the yolk remains soft, yet not runny.” The rules are strictly enforced. Last year, a competitor was disqualified for using an ostrich egg.

The margin for error in this deceptively simple dish is high, warns last year’s Vice-Champion Christopher Edwards from Le Saint Sebastien. “You need to get the cooking of the yolk right,” he explains. According to the Australian chef, the egg should be placed into boiling water, then reduced to a simmer, and cooked for exactly 8 minutes 40 seconds. “And after, straight into an ice-bath to cool down,” he adds, “otherwise there’ll be an unsightly gray ring around the yolk.”

As for the mayonnaise, “it seemed that everyone uses a lot of mustard and the better received [mayonnaises] were holding their shape,” recalls Edwards. His secret ingredient? Oil from saucisse morteau, a traditional French smoked sausage from Toulouse. Edwards also garnished his dish with a powder of the same wild herbs eaten by the chickens which laid his prized eggs.

Although the Association has always taken itself light-heartedly, it has undoubtedly contributed to the revival of oeuf mayonnaise’s popularity. In 2021, the most ordered dish on Deliveroo in France was oeuf mayonnaise from Bouillon Pigalle, the champions of the competition in 2019. The Association also published a cookbook in December of last year, “L’oeuf mayo, recettes extraordinaires par 49 grands chefs,” featuring recipes from legends of the French culinary scene such as Yannick Alléno, Pierre Gagnaire, and Guy Savoy. The 10,000 copies released have all but sold out.

The Association’s co-founder Gwilherm de Cerval believes that it was inevitable that classic bistro cuisine would make a comeback. “We can’t go against our DNA and the French DNA is cream, butter, and fat.” For him, oeuf mayonnaise represents “the essence of the restaurant industry. To be a restaurateur is to host people, to make them happy, to show them a good time.” Restaurateurs don’t expect to turn much of a profit on the modestly priced dish. Rather, the reason “to serve oeuf mayonnaise is to make the clients feel at home.”

Lampreia de ovos comes loaded with sugar, eggs, and the long history of glorifying a most peculiar parasite.
food

The Chinese City Famous for Eggs With Two Yolks

Like the Christmas tree, they were probably a German import.
churches

What else are you going to do with all those yolks?
Video • Object of Intrigue

Once a 19th-century brasserie, this McDonald's exterior celebrates Alsatian design and the "King of Beer."
Paris, France

This frog-themed restaurant was frequented by Picasso, Saint-Exupéry, and more.
Paris, France