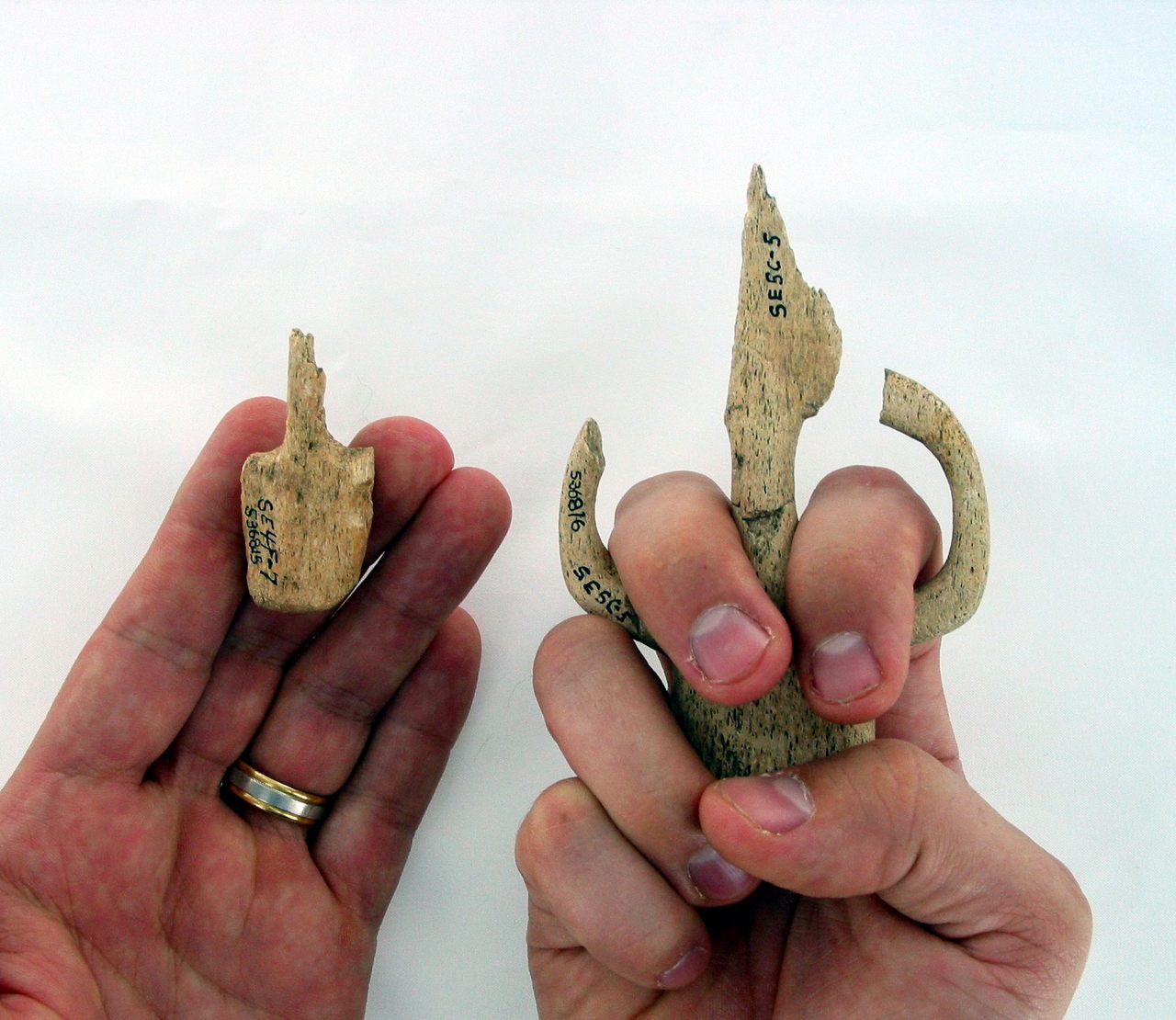 The atlatl fragment on the left might have been used by a child. The one on the right is full size. Courtesy Robert Losey
In This Story
Destination Guide

Near the town of Seaside, Oregon, a heap of Native American artifacts has been hiding in plain sight for more than a millennium. The site known as Par-Tee, in a region long populated by Chinook- and Salish-speaking people has yielded thousands of tools excavated from centuries-old middens since the 1970s. Now, several objects from the middens at Par-Tee—spear-throwing tools called atlatls and weights used with them—have surprised archaeologists with their small size. The find suggests that atlatl training began early in the lives of the people who lived there.

During the site’s occupation between the second and 10th centuries, before the bow and arrow came to be the hunting tool of choice, atlatls were in wide use. They’re handles made to latch on to spears, so they can be thrown farther and faster. Learning to use an atlatl effectively, as one might expect, takes practice.

“It’s a critical thing,” says Robert Losey, an archaeologist at the University of Alberta and the co–lead author of the findings, published in the journal Antiquity. “For us, it’s like knowing how to use your phone or your car. It’s essential.”

The atlatls look like long paddles, with two carved rings on one side for the thrower’s fingers to slip into. Weights would be attached, to add torque to the throwing motion. “They’re the kind of thing you’d use if you’re throwing a tennis ball to your dog and you don’t want to hold the slobbery thing,” Losey says.

Atlatls are found in the archaeological record in Europe as far back as the Upper Paleolithic, about 30,000 years ago. Most are about a foot-and-a-half long, and built for adult hunters. At Par-Tee, they might have been used to hunt seabirds, sea lions, and seals, as well as in combat with other groups. The new atlatl finds at Par-Tee are a fair bit smaller. Though they were in fragments, one would have been less than eight inches long. They would not have been able to be used by even the smallest adult, leading the researchers to conclude they had been made specifically for children.

“We often pigeonhole certain kinds of activities,” says Jane Baxter, a historical archaeologist at DePaul University who specializes in labor, gender, and childhood in the recent past. “There are artifacts we think of as for work, and play, and learning. And we often think of learning as the work of childhood. But these are artifacts that break down those boundaries. It’s a toy, it’s a training tool, and it’s a way of learning to work.”

Children’s toys have turned up at sites around the world, and in some places roughly made ceramics or stone tools appear to indicate a novice’s hand. Such ceramics have turned up in the American Southwest, Baxter says.

At Par-Tee, the scale of the atlatls is tangible evidence of the presence and activity of young ones. “You want to learn how to use these things as soon as you can in their life,” Losey says. “Surely, people started using these things in childhood, so by the time you’re physically an adult you’re already good at it.”

Interpreting how these finds might have actually been used is a challenge, but is significant to a richer understanding of a long-vanished way of life.

“It always gets harder when you start to put things like age and gender and identity and feelings into the equation,” Baxter says. “But we if don’t take those risks, what kind of a past are we showing ourselves?”

Children and even infants joined adults in making their marks, say archaeologists.
disasters

A massive space rock impact event may have inspired the tale of godly wrath.
archaeology