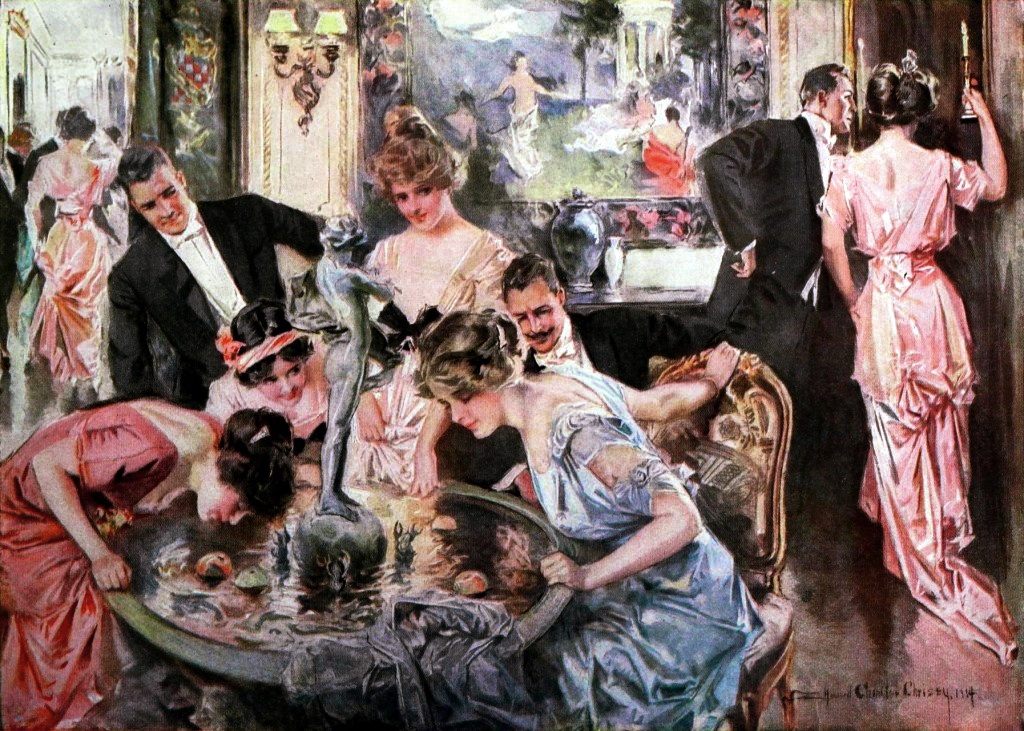 This article is adapted from the October 23, 2021, edition of Gastro Obscura’s Favorite Things newsletter. You can sign up here.

One cold December night last year, I sat outside in the dark with a bottle of 100-proof apple liquor and a pile of trail mix.

This wasn’t me trying to cope with 2020 trauma or a breakup. Plus, I had company: two of my Gastro Obscura coworkers on Zoom, also armed with high-proof liquor, dried fruit, and nuts.

We were about to play an extremely old-fashioned party game known as snapdragon, which involves nuts, raisins, and a lot of liquid fire.

We cover a lot of food history here at Gastro Obscura, but there’s one sub-genre that keeps popping up: namely, how people in the British Isles—and by extension the United States—once used fortune-telling foods to discover the identity of their future spouse. And young people often undertook these food rituals during important holidays that we no longer associate with romantic love. Think Christmas Eve, New Year’s, and, most of all, Halloween.

Some of these traditions have been repurposed into familiar Halloween party games, like bobbing for apples. Others, like snapdragon, have died out for good reason.

This Halloween, whether you’re married or not, give one of these ancient love rituals a shot. Who knows? Maybe the spirits will favor you. Just take care when reaching for fruit inside actual burning spirits.

Bobbing for apples is still a fall party game, where most of the fun is watching small children get drenched. But before the era of plastic Scream masks and miniature candy bars, this was also a love ritual.

One variation of the game “was confined to the young men of the party.” After marking apples (likely with a knife, as ink would wash away) with what they wanted to acquire, “be it sweetheart, honors, or wealth,” the boys dove in, trying to grab the apples by the stems with their teeth.

Another version was open to all, but had more rules and infinite capacity for drama, since each apple was assigned the name of an unmarried participant.

How to play: According to one 19th-century set of instructions, “the apple-bobbing contest … must be gone through with as near to the witching hour of 12 as possible. Then, when set afloat in a tub, those who are to learn their fate gather around. With their teeth they try to catch the stem of the apple, and if they succeed in bringing it from the tub they are to marry the person for whom that particular apple is named.”

These are the two spookiest rituals on this list. Instead of simply figuring out the name or the character of a future spouse, dumb cakes and dumb suppers were meant to summon them, in both dreams and the flesh.

“Dumb” in both rituals likely means the old word for “silent.” For dumb cakes, girls would bake a simple cake in complete silence, and for the suppers, they would cook and eat an entire meal without saying a word. A successfully baked dumb cake caused the cooks to dream of their future spouse. A dumb supper, on the other hand, caused the dream boy to actually show up. While it seems improbable, a plethora of legends tell of this actually happening—along with the terrible consequences of failure.

How to play: Here are detailed instructions on how to bake a dumb cake to summon a magical boyfriend. Spoiler: It didn’t work for me.

Kale isn’t just a leafy super-food. Until recently, it was the star of several Scottish rituals to determine the features of one’s future spouse.

Sure, you could straight-up eat the kale, in a dish called colcannon. For Halloween, though, colcannon came garnished with a few more ingredients than the requisite potatoes, cabbage, onions, and kale. Lucky or unlucky eaters could dig up a ring, which meant marriage within the next year, or a thimble, which foretold spinsterhood.

But for the true Halloween kale experience, no cooking was required. Instead, on a dark night, people trooped over to the nearest kale field and brought out a blindfold.

How to play: After being pushed into the field, “each person must pull the stalk that first comes to hand,” a newspaper in 1909 explained. “The future partner is bound to be stout or slender, short or tall, according to the size of the stalk selected. The quantity of earth or turf clinging to the roots of the stalk decides the size of the dowry or fortune, while the taste of the pith determines the temper of the mate selected.” (This is a tough one to do, though, should you have no kale field nearby.)

It’s a very easy game, when you get right down to it: Pour high-octane booze over nuts and raisins, set them on fire, and stick your fingers into the flames for the fruit.

This was mostly a Christmas game, but around Halloween, it was often modified into a fortune-telling ritual. Which called for more kinds of fruits and nuts. Pulling a piece of candied ginger from the flames signified “a peppery wife or husband,” as one 1905 newspaper put it, while citron meant that the future spouse would be wealthy.

How to play: You can find instructions on Gastro Obscura. I found it both fun and surprisingly safe. Watch your fingers, though.

You can look at all these romantic Halloween games in two ways. One, they were fun, flirty ways to pass the time at parties, like Spin-the-Bottle. Two, that, especially when it came to dumb cakes and dumb suppers, that they were attempts by young women to gain even a little insight into their future marriages, during a time when choices were limited and sometimes unattractive.

But I do find it interesting that they all depended on food. There are many more of these rituals that I didn’t have space to cover here. Most, I noticed, involved fall foods, such as nuts and apples. It makes sense that, after all the work of harvest was done, that young people would have the time to gather together, and that their thoughts would turn to finding their future husband or wife.

In Scotland, Trick or Treaters Sing (And Tell Jokes) For Their Candy

This tradition dates back hundreds of years.
food

Crafting skin and flesh from the sweet and tasty.
Video