How Constance and Oscar Wilde Helped Get Women Into Trousers - Atlas Obscura
Want to see fewer ads? Become a Member. 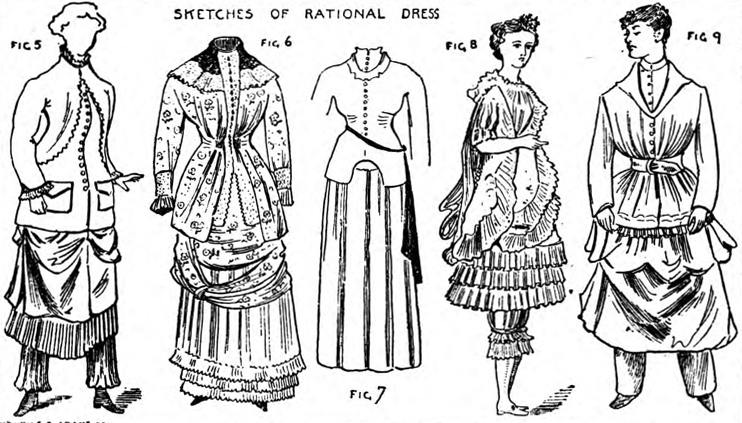 The Rational Dress Society republished these caricatures in the pamphlet of their 1883 annual meeting. Public Domain

The year was 1884, and Oscar Wilde was already something of a London celebrity. Though he had not yet published the plays that would earn him his spot among the Victorian literati, he had made a name for himself as aesthete, man-about-town, and lecturer—with public views on everything aesthetic, including clothes.

At the beginning of the year, he announced his engagement to Constance Lloyd, who he had met in Ireland some years earlier. Newspapers frothed about the news, and appeared relieved that Wilde, and his new wife, would not be moving to Dublin: “there was some fear lest London should lose its lion and society its favorite source of admiration and ridicule. … Happily this danger is averted. We keep Oscar.”

But Wilde also appeared in the papers that year for another reason. In a series of letters published in the Pall Mall Gazette, he wrote about how women ought to dress. The following year, in the New York Tribune, he published his essay “The Philosophy of Dress,” in which he stressed the important relationship between clothing and one’s soul.

At that time, women commonly wore heavy, restrictive underwear, and long, cumbersome skirts with crinolines or bustles. Corsets were certainly uncomfortable, but they could also be lethal, deforming skeletons, compromising fertility and even driving internal organs into places they oughtn’t have been. Despite that, people continued to wear them, and to “tight-lace,” ignoring doctors’ concerns and claiming these devices improved posture.

It was in this climate that people began to call for dress reform, with some asserting that these corsets were immodest and promoted an objectifying take on women’s bodies. In time, “dress reform” would come to be seen as a crucial part of the fight for women’s equality. It’s ironic, then, that many of the “reformed” clothes suggested as an alternative were themselves deemed shocking and morally questionable.

Wilde’s letters were strongly in favor of simple, comfortable outfits for women, with minimal “fringes, flounces and kilting.” More radically, he expressed his fondness for the “divided skirt.” This controversial article of clothing was essentially an extremely wide-legged pair of trousers. It had caused some anxiety in the British press, amid concerns that two-legged clothing for women would promote immoral ideals. The divided skirt—a trouser posing as a skirt—was a compromise of sorts. In a public letter, Constance, Wilde’s wife, described it as trying to “look as though it were not divided, on account of the intolerance of the British public.” Those who did wear it loved the liberty it afforded them. One wearer described “the delightful sense of freedom that results from the removal of petticoats.”

Constance was propelled to stardom through her celebrity marriage. Even the New York Times reported on her wedding dress, which Wilde is alleged to have designed. (In his biography of Wilde, Richard Ellmann describes “rich creamy satin,” “a delicate cowslip tint … a high Medici collar; ample, puffed sleeves [and a] veil of saffron-colored Indian gauze.”)

On her honeymoon, the now-Constance Wilde ruminated on what to do, beyond being mother and wife, writing to a friend that she wanted a career: “I am thinking of becoming a correspondent to some paper, or else going on the stage.” Though she didn’t go on the stage, nor became a reporter, she was instead a star campaigner for multiple causes. Women’s dress reform, and the divided skirt, would be one of her most public targets.

A few years earlier, in 1881, Lady Frances Harberton had launched the British arm of the Rational Dress Society, an organization that later promised to “promote the adoption, according to individual taste and convenience, of a style of dress based on considerations of health, comfort and beauty.” Staggeringly, it advocated for underwear that weighed under seven pounds. The Society came four decades after the bloomers craze of the 1850s, but similarly promoted towards the liberation of bifurcated leg cladding: the “divided skirt.”

The satirical magazine Punch had plenty to say about the “divided skirt”: in June 1881, it published a not-inaccurate poem about what, exactly, the divided skirt was:

“Skirts be divided—oh, what an atrocity!
To ‘dual garmenture’ folks must attain.
True that another skirt hides this insanity
Miss Mary Walker in old days began;
Yet it should flatter our masculine vanity,
For this means simply the trousers of Man!”

The following month, they decried it simply as “revived Bloomerism,” and proposed that its proponents be nicknamed “Pantaloon-atics.” Bloomers were Turkish-style trousers popular in the early 1850s, for similar reasons to the “divided skirt”. It was short-lived, but the media furore it provoked continued, and it loomed large in the popular imagination.

Constance seems to have agreed with, and sought to propagate, Wilde’s strong views on women’s clothing. She dressed as much for him as herself: The actress Elizabeth Robins remembered meeting her at home, where she wore a white muslin dress, despite the relatively cold August day. Seeing Robins staring at her “midsummer frock”, Constance is said to have remarked: “My husband likes me to wear white.” On other occasions, onlookers remembered Constance’s “very peculiar and eccentric clothes,” which she wore apparently “to please Oscar, not herself.” At a private viewing, “instead of looking at the pictures on the walls, a great many people were asking each other if they had seen Mrs. Oscar Wilde.”

All of these things collided—Constance’s sudden shunt into the limelight; her readiness to wear unusual clothes; Wilde’s strong and supportive views on dress reform; her desire to do something beyond being Wilde’s wife and mother to their two sons. She quickly became one of the Rational Dress Society’s most vocal and visible advocates.

In this, she was well-supported by her husband. (Wilde loved clothes of all sorts, and wrote to the Daily Telegraph that waistcoats ought to “show whether a man can admire poetry or not.”) In November 1888, she gave one of a few lectures for the society, entitled “Clothed in Our Right Minds,” in which she modeled the “divided skirt” herself and spoke out against the claims that such garments were indecent. Around the same time, she became editor of the Rational Dress Society’s gazette.

Wilde himself was unambiguous about the divided skirt—that it should not be “ashamed of its own division,” that “the principle of the dress is good,” and that it was “a step towards … perfection” in women’s clothing. If anything, he called for even more radicalism in women’s legwear. “If the divided skirt is to be of any positive value, it must give up all idea of ‘being identical in appearance with an ordinary skirt’;” he wrote. “It must diminish the moderate width of each of its divisions, and sacrifice its foolish frills and flounces; the moment it imitates a dress it is lost; but let it visibly announce itself as what it actually is, and it will go far towards solving a real difficulty.” Indeed, he said that he would like to see women in “some adaptation of the divided skirt or long and moderately loose knickerbockers.”

All the year before, Constance had become more and more confident as a Dress Reformer, wearing the “divided skirt” in public as proof that it could be an elegant, beautiful garment, worn in her case as part of a suit of striped cheviot wool, trimmed with blue fur and birds’ wings.

In the meantime, Wilde was busying himself with the editorship of the Woman’s World, a regular magazine for women about life, culture, and fashion. When asked to edit it, in 1887, he responded enthusiastically: “No one appreciates more fully than I do the value and importance of Dress, in its relation to good taste and good health.” He seems to have hoped that the magazine could be a vehicle for progressive views, and attempted to lower the cover price so that it was easily accessible to women of all classes. Constance, too, was drawn in to write a couple of articles about children’s clothing, in which she spoke out in favor of the “divided skirt” for little girls: “The Rational Dress should be adopted by all mothers who wish their girls to grow up healthy and happy.”

But their enthusiasm for these projects—the Woman’s World, rational dress reform, even the divided skirt—waned as Oscar’s star rose in the 1890s. He became not just a celebrity, but a celebrity playwright. Then, in 1895, he was a cause célèbre, sentenced to two years’ hard labor on charges of sodomy and gross indecency.

Even without the Wildes’ involvement, the push for the “divided skirt” hurried, or perhaps shuffled, onwards. Their celebrity had undoubtedly added momentum and public attention to the cause, though many years would pass before trousers and their antecedents were anything other than shocking for women. In 1898, Lady Harberton, the founder of the society, was refused entry to the Hautboy Hotel for wearing a later incarnation of the divided skirt. And the suffragettes, 10 years on from that, were labeled “droll objects” for wearing the divided skirt while campaigning.

It would not be until the 20th century, and long after Wilde and Constance’s deaths, that trousers became de rigueur for women—though both would surely be pleased about their own small part in making that happen. Sadly, though, waistcoats that demonstrate poetic appreciation are still far from the norm.

Queen Elizabeth I wanted none of it.
mines

"The article of clothing which women ought only to wear in a figure of speech."
rites and rituals

Literally a party in your pants.
design