Pando, the World’s Largest Organism, Is Being Eaten by Deer - Atlas Obscura
Want to see fewer ads? Become a Member. 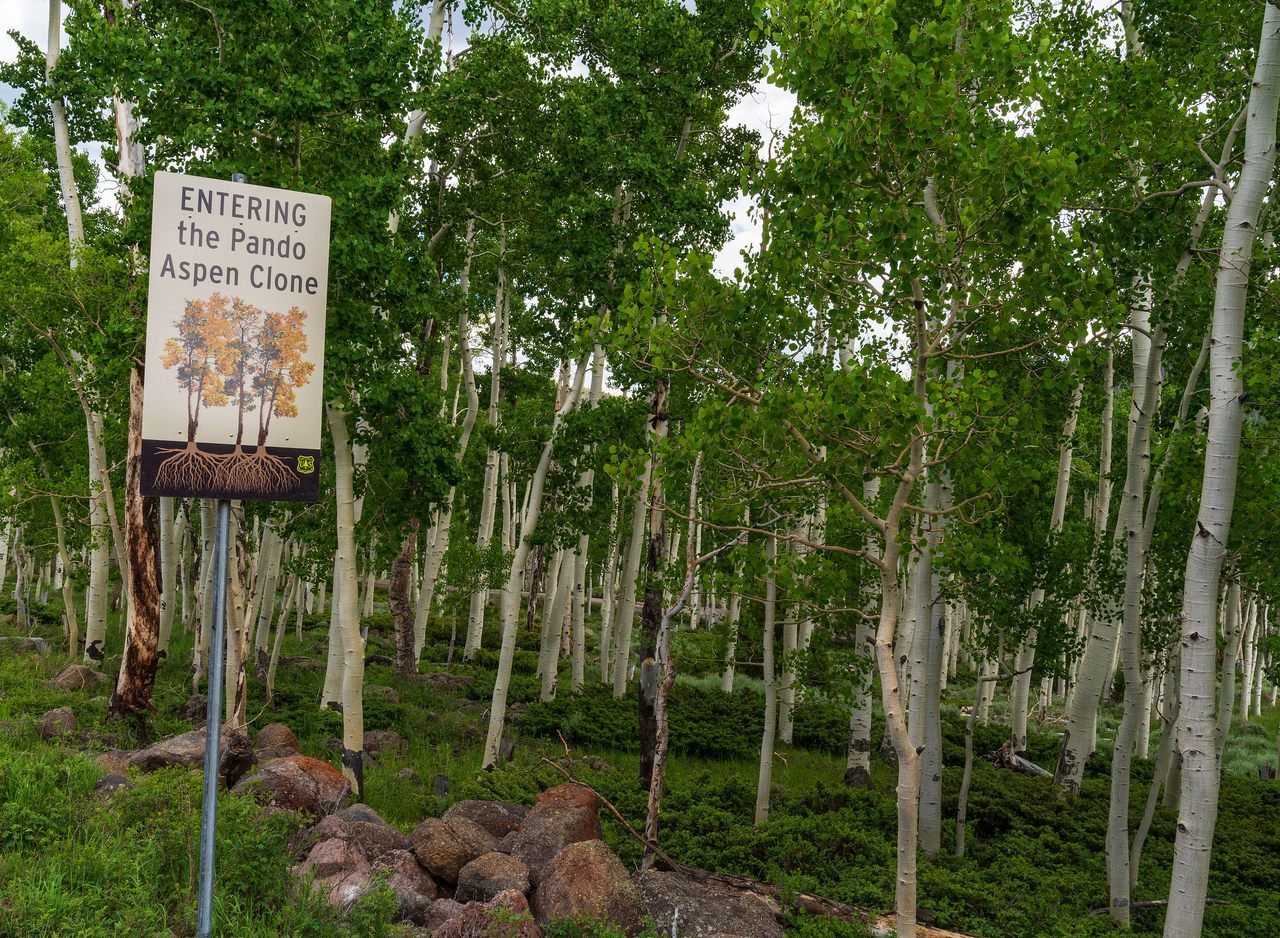 The quaking aspen known as Pando is one of the planet's largest and oldest living organisms. Lance Oditt/Courtesy Friends of Pando
In This Story
Place

One of the world's oldest and most massive living organisms is a grove of quaking aspens.
Destination Guide

In the Wasatch Mountains of the western United States, on the slopes above a spring-fed lake, there dwells a single giant organism that provides an entire ecosystem on which plants and animals have relied for thousands of years. Found in my home state of Utah, “Pando” is a 106-acre stand of quaking aspen clones.

Although it looks like a woodland of individual trees with striking white bark and small leaves that flutter in the slightest breeze, Pando (Latin for “I spread”) is actually 47,000 genetically identical stems that arise from an interconnected root network. This single genetic individual weighs around 6,000 metric tons. By mass, it is the largest single organism on Earth.

Aspen trees do tend to form clonal stands elsewhere, but what makes Pando interesting is its enormous size. Most clonal aspen stands in North America are much smaller, with those in the western U.S. averaging just 3 acres.

Pando has been around for thousands of years, potentially up to 14,000 years, despite most stems only living for about 130 years. Its longevity and remoteness mean a whole ecosystem of 68 plant species and many animals have evolved and been supported under its shade. This entire ecosystem relies on the aspen remaining healthy and upright. But, although Pando is protected by the U.S. Forest Service and is not in danger of being cut down, it is in danger of disappearing due to several other factors.

Overgrazing by deer and elk is one of the biggest worries. Wolves and cougars once kept their numbers in check, but herds are now much larger because of the loss of these predators. Deer and elk also tend to congregate in Pando as the protection the woodland receives means they are not in danger of being hunted there.

As older trees die or fall down, light reaches the woodland floor which stimulates new clonal stems to start growing, but when these animals eat the tops off newly forming stems, the stems die. This means that, in large portions of Pando, there is little new growth. The exception is one area that was fenced off a few decades ago to remove dying trees. This fenced-off area has excluded elk and deer and has seen successful regeneration of new clonal stems, with dense growth referred to as the “bamboo garden.”

Older stems in Pando are also being affected by at least three diseases: sooty bark canker, leaf spot, and conk fungal disease. While plant diseases have developed and thrived in aspen stands for millennia, it is unknown what the long-term effect on the ecosystem may be, given that there is a lack of new growth and an ever-increasing list of other pressures on the clonal giant.

The fastest-growing threat is that of climate change. Pando arose after the last ice age had passed, and has dealt with a largely stable climate ever since. To be sure, it inhabits an alpine region surrounded by desert, meaning it is no stranger to warm temperatures or drought. But climate change threatens the size and lifespan of the tree, as well as the whole ecosystem it hosts.

Although no scientific studies have focused specifically on Pando, aspen stands have been struggling with climate change-related pressures, such as reduced water supply and warmer weather earlier in the year, making it harder for trees to form new leaves, which have led to declines in coverage. With more competition for ever-dwindling water resources (the nearby Fish Lake is just out of reach of the tree’s root system), temperatures expected to continue soaring to record highs in summer, and the threat of more intense wildfires, Pando will certainly struggle to adjust to these fast-changing conditions while maintaining its size.

Yet Pando is resilient. It has already survived rapid environmental changes, especially when European settlers began inhabiting the area in the 19th century, or after the rise of 20th-century recreational activities. It has dealt with disease, wildfire, and grazing before, and remains the world’s largest scientifically documented organism.

Despite every cause for concern, there is hope as scientists are helping us unlock the secrets to Pando’s resilience, while conservation groups and the Forest Service are working to protect this tree and its associated ecosystem. And a new group called the Friends of Pando aims to make the tree accessible to virtually everyone through 360 video recordings.

Last summer, when I was visiting my family in Utah, I took the chance to visit Pando. I spent two amazing days walking under towering mature stems swaying and “quaking” in the gentle breeze, between the thick new growth in the “bamboo garden,” and even into charming meadows that puncture portions of the otherwise-enclosed center. I marveled at the wildflowers and other plants thriving under the dappled shade canopy, and I was able to take delight in spotting pollinating insects, birds, fox, beaver, and deer, all using some part of the ecosystem created by Pando.

It’s these moments that remind us that we have plants, animals, and ecosystems worth protecting. In Pando, we get the rare chance to protect all three.

Richard Elton Walton is a postdoctoral research associate in biology at Newcastle University. For more about Pando, listen to recent episodes of the Atlas Obscura Podcast about the marvelous quaking aspen and its status as one of the planet’s oldest living organisms.

A remote wedge of wilderness is home to trailblazing elephants, epic trees, and the only chimps and gorillas known to share a meal.
nature

The Great Old Ones: In Celebration of Our Tree Elders