The Singaporean Baker Inventing a Pie for Every American State - Gastro Obscura
Want to see fewer ads? Become a Member. 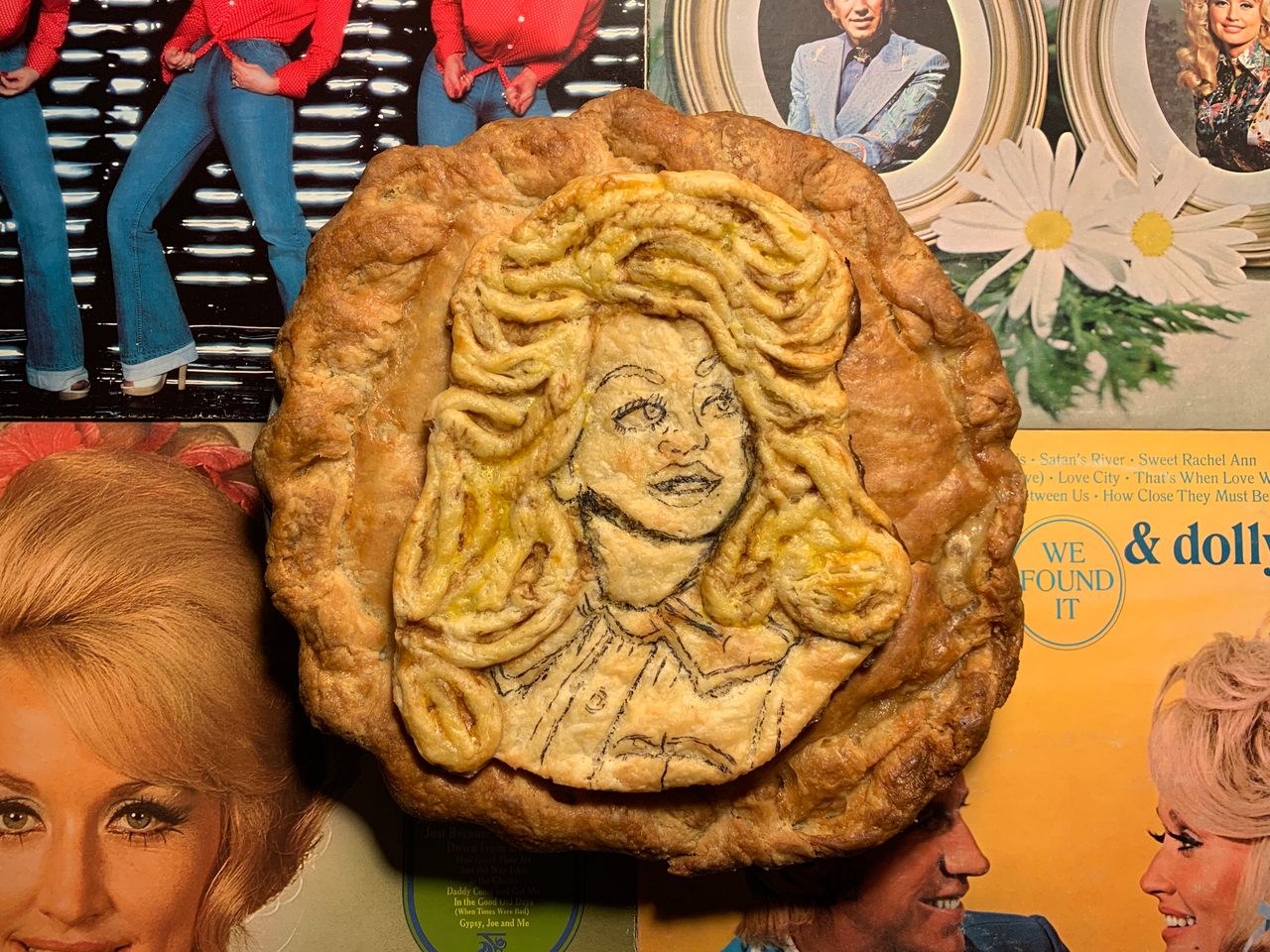 For Tennessee's biscuits and gravy pie, only Dolly would do as decor. All photos courtesy of Stacey Mei Yan Fong
In This Story
Food

Pies can be finicky. Overwork the dough, and the crust won’t flake. Too-liquid filling can hesitate to set, or ooze out of the tin. Most people, as a result, stick to the pies they know how to make, or simply buy them from the store.

But Stacey Mei Yan Fong, a Brooklyn-based baker, has invented nearly 50 drastically different pies over the last four years. Fong, who was born in Singapore and moved to the United States for college, is the creator of 50 Pies / 50 States, a project where she attempts to capture the identity of each American state in a pie.

Baking, for Fong, is more than a hobby. It’s a quest for belonging. “Where’s my home?” Fong says she recalls thinking, long before she came up with 50 Pies / 50 States. “Is it Singapore where I was born? Is it here, now, in America?” She began ruminating on these questions while baking her way through a pie cookbook in 2016. Familiarizing herself with the art of the classic American pie, she says, made her feel at home in the United States, more than anything had before. Inspired, she decided to launch a project to “learn more about the country that I’ve chosen to call home, and do it in a fun, delicious way.”

It takes thoughtful research to trap a state’s unique qualities in a pie crust. Fong spends anywhere from two weeks to a month per pie, researching classic flavors from each state while also considering how to express more intangible, nuanced concepts via pastry. Working her way alphabetically through the states, Fong doesn’t usually limit herself to standard flavors or pie designs. As a result, her creations are savory as often as they are sweet, and as different from each other as the states themselves.

For her pastry tribute to Nevada, Fong took inspiration from Las Vegas’s all-you-can-eat buffets. The end result was a pie made up of four savory and four sweet slices, with flavors like Caesar salad, Alaskan King Crab with herbed butter, a fig jam-glazed custard fruit tart, and chocolate mousse. As she does with all her pies, Fong breaks down the baking process in pictures on her site, while sharing what she learned throughout her research process. Fong notes that she wanted this particular pie to symbolize Nevada’s culture of optimism and excess.

To date, Fong has completed 44 pies out of her planned 50. While Fong hasn’t visited every state she’s studied so far, one pie took her straight to the source. “The South Dakota pie ended up being something so beyond what I thought it was going to be,” Fong says. A friend introduced her to a South Dakota-based historian, and she ended up flying to South Dakota as part of her research. In turn, the historian introduced her to Sean Sherman, the famed Sioux Chef. Inspired by the state’s Indigenous culture, Fong created a wild rice pudding pie with berry compote and pumpkin seed crunch.

Fong also strives to give each completed pie to a resident of the state it honors. Up until COVID-19 swept across the United States, Fong personally hand-delivered many of her pies to friends and loved ones around the country and looks forward to the day when she can safely resume her project. “For me to be able to bring them a slice of pie, to show how much I appreciate and how much I love them, it’s very special to me,” she says.

With six pies left to go, Fong is considering how to compile her years of work. “I feel like my pipe dream for this project is definitely putting a cookbook together,” she says, with all her recipes and research included. Currently working in Brooklyn as a baker, she’s still working on new pie concepts, including her own take on the American hard-time classic of desperation pie.

But even as Fong plans new projects, she keeps coming back to the themes of 50 Pies / 50 States to reflect on the nuances of life in the United States. Fong hopes that her work can remind people of the good things about each and every state. “Food is the great connector,” she says. “I feel like at the end of the day, all I have is hope for this country.”

Crafting skin and flesh from the sweet and tasty.
art

Lamprey pie is a coronation tradition.
Video • Wonder From Home