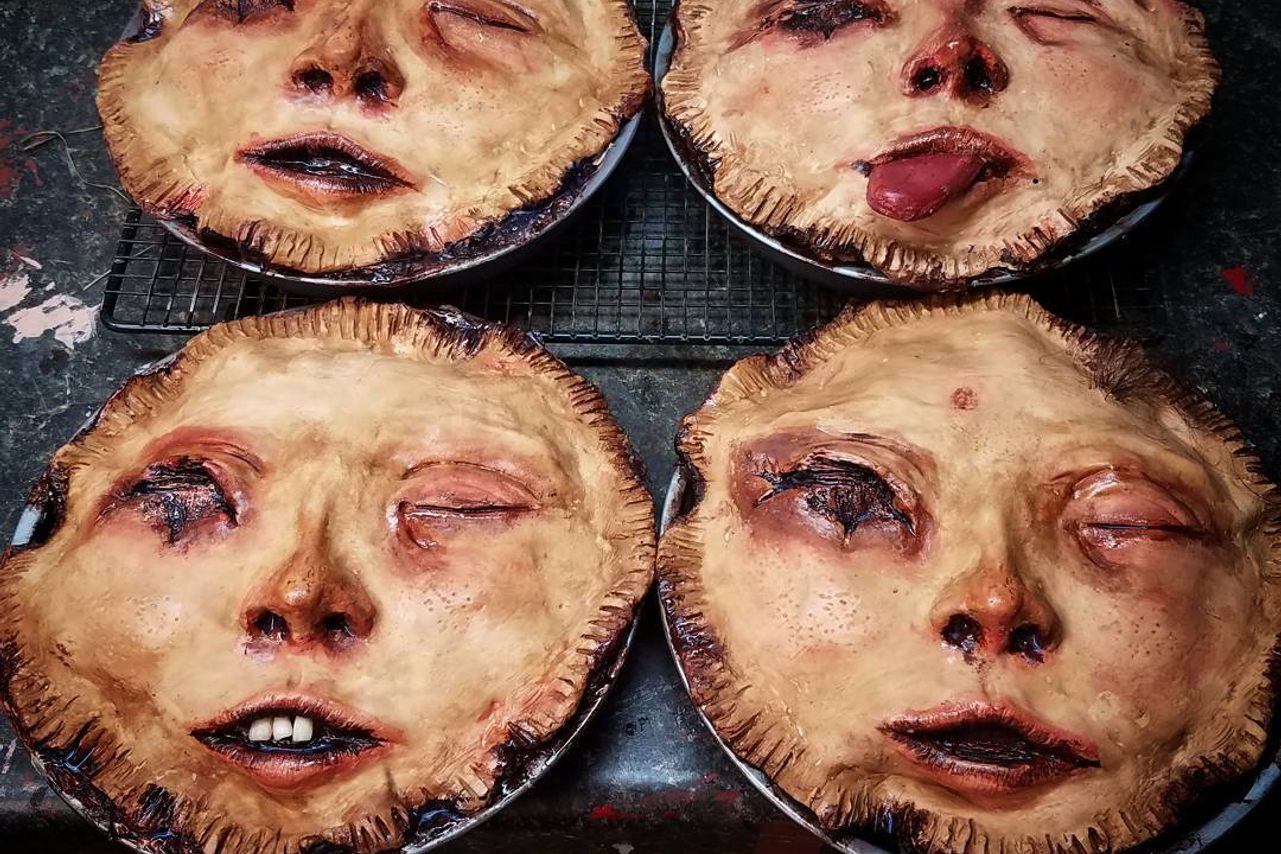 Spectators have long had a grotesque affinity for the fictional villain, Sweeney Todd, whose victims are ingeniously baked into human meat pies and sold by his baker accomplice, Ms. Lovett. But what happens when this Victorian “penny dreadful” serial takes a contemporary turn?

Two oddities-loving artists have created their own “people pot pies” using very different media. Special effects artist Ashley Newman was the first to try her hand at making gory, decidedly inedible pies. Made of perfectly skin-toned latex stretched over a foam base, Newman’s pies stare up blankly from their sunken, bruised eye sockets. Meanwhile, browning on the raised cheek bones and nostrils, which ooze sanguineous fluids, give the impression of a juicy, fleshy face pulled straight from the oven. Newman sells her prop pies with mix-and-match facial features such as a protruding ruby tongue, three crooked and eerily opalescent teeth, and a small tuft of hair.

Once Newman posted her pies online, cake artist Andrew Fuller received an onslaught of tags and emails. As the grandson of a barber, a straight-razor aficionado, and a lover of the grotesque, Fuller fits the Sweeney Todd profile. Over the years, the artist had grown increasingly obsessed with creepy cakes, even developing an anatomically correct heart cake that, when sliced, bled a goopy raspberry coulis (he sold out over Valentine’s Day). So Fuller couldn’t resist taking inspiration from Newman, with whom he has a mutually admiring relationship.

But making edible versions was a very different project. “You have to be strategic with size and proportions when you make them, because they are dough,” says Fuller. “You have to consider how much certain details may expand or warp during baking.” As pie makers know, crust is a fickle friend: It thirsts for liquid to become supple, like human skin, yet threatens to become tough and leathery, and shrink away from the pie plate’s edge if too much is added. One pie maker’s trick that Fuller uses is substituting some of the water for vodka, which, at 40 percent alcohol, evaporates during cooking and helps mitigate the overproduction of gluten in the crust.

In addition to the artistry atop the pie, Fuller gets creative with the people pot pie innards. Cherry seemed an appropriately juicy filling, but Fuller freshens the flavor with mint. His variation on Newman’s pies include skin-like pieces laid in a patchwork, some sutured together, and an added, third, swollen eye that is crusted shut. A fruity goo thickened with cornstarch oozes from the pie’s nostrils, while demonic-looking cherry orbs stare from beneath the open eye sockets (which also function as pie vents). The crowning glory, a secret Andrew will take to the grave from which he draws his ideas, is a tuft of gnarly, fried-looking, yet fully edible hair.

What draws the two oddities-obsessed artists towards the edible? Newman, who also sells a line of realistic, body-part jewelry, explains that: “It’s grotesque yes, but also completely ridiculous. You see it and you think, ‘Why would someone do this?’ That makes you laugh and starts you thinking.”

Fuller, meanwhile, brings up his fascination with Ed Gein, also known as “The Butcher of Plainfield.” Gein was notorious for using human skin—from the bodies of women he murdered and corpses retrieved from fresh graves—to make lampshades, waste baskets, and clothing. Though films such as Psycho, The Texas Chainsaw Massacre, and Silence of the Lambs have also taken inspiration from Gein, Fuller is perhaps the only to do so in fondant. Still, conscious of the subject’s sensitivity, Fuller says, “Listen, don’t kill people. I don’t condone it. But he was creative and that left quite the impression. Dark though it may be, I would’ve made a beautiful lampshade.”

In Scotland, Trick or Treaters Sing (And Tell Jokes) For Their Candy

This tradition dates back hundreds of years.
food

Lauren Ko is as American as mango pie.
Video