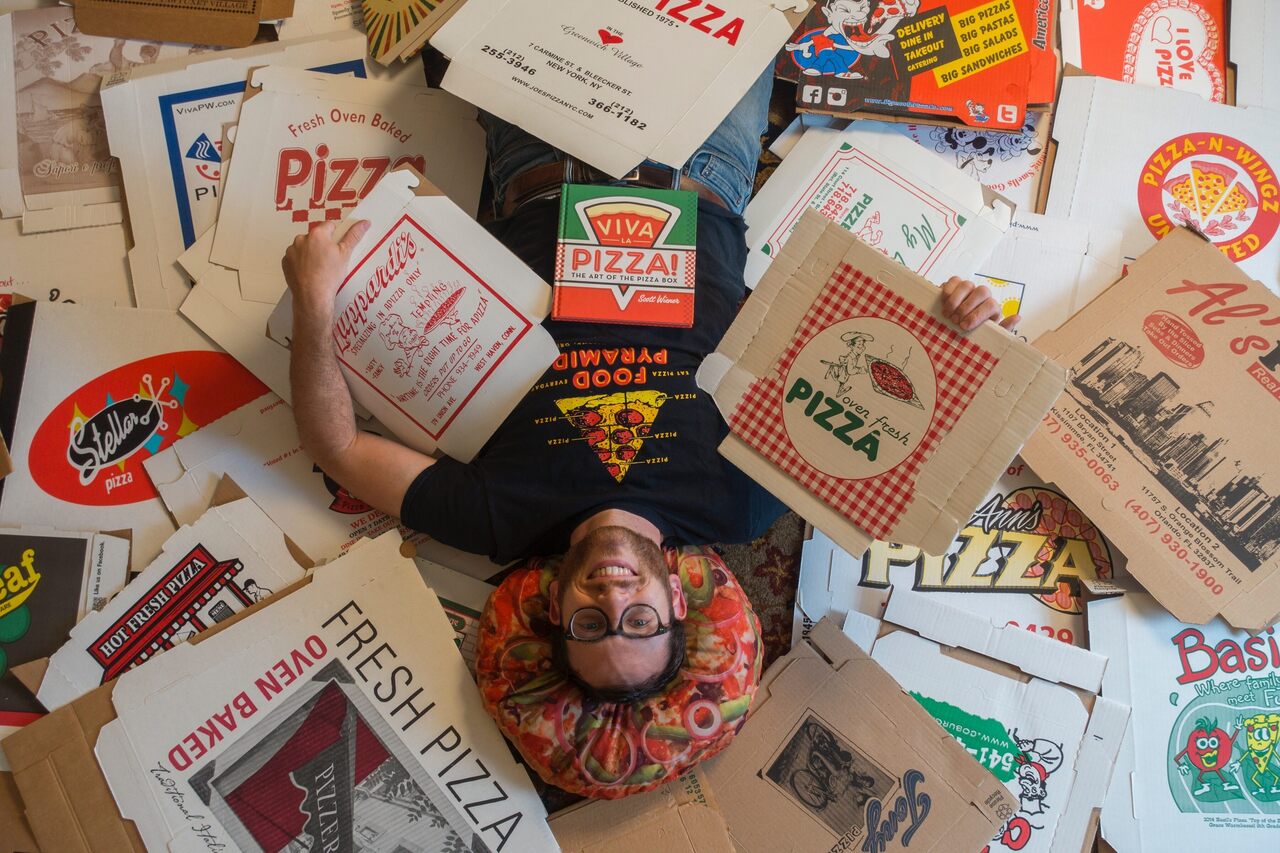 People send Scott Wiener pizza boxes from around the world for preservation. Randy Duchaine/Courtesy of Scott Wiener
In This Story
Place

A world of whimsy and wonder aboard a one of a kind historic landmark vessel.
Destination Guide

Scott Wiener thinks that putting a pizza in a pizza box is a terrible idea. “It traps all the steam,” he complains. “It’s the same reason you don’t take fresh bread and put it into a plastic bag, because if you do that, you trap all the moisture and it gets soggy.”

There’s a deep irony there, considering that Wiener owns the world’s largest collection of pizza boxes. He’s held the title since 2013, when the Guinness Book of World Records listed his collection of 595 boxes from around the world. Unlike most pizza boxes, which end up soaked through with grease and crammed into trash bins, his boxes are pristine.

Throughout a decade spent accumulating pizza packaging, Wiener’s hobby has attracted intense interest. Though he’s also the founder of Scott’s Pizza Tours and the non-profit Slice Out Hunger, Wiener dryly notes that “people more often want to [talk about] the pizza-box collection than anything else I do.” But next week, he’ll be certifying his title once more. This time, he has 1,550 boxes.

“Give or take,” he says with a smile.

In the New Jersey town where he grew up, there was some good pizza, and “some really crappy stuff,” but nothing particularly memorable, says Wiener. But recently, stuck at home during the COVID-19 lockdown, he found himself paging through diaries from the early 2000s. “I didn’t write about anything but pizza,” he says with awe.

At the time, he didn’t have a food career. He went from job to job in the music industry until a unique gig let him pursue his pizza passion. With room and board handled by caretaking duties on a historic New York boat, the Yankee Ferry, he suddenly had the financial freedom to quit his job. When he wasn’t showing visitors around the 1907 ferry, he spent his free time dragging the boat’s owners to dry land to sample pizza spots around New York City. He soon wondered if he could combine tours and his love of pizza, and founded Scott’s Pizza Tours. He has now been “professionally obsessed with pizza since 2008,” he says.

But the journey to the world’s largest pizza-box collection started in New Jersey, when Wiener spent much of 2009 rounding the state to choose its best pizzerias with Peter Genovese, food writer for Newark’s Star-Ledger. In Genovese’s Munchmobile, a van topped with a gigantic fake hot dog, Wiener and other readers visited 333 pizzerias. “Visiting so many places, you start to notice differences,” he says. He fixated on the pizza boxes. “Pizza boxes are not all the same, and that means they’re interesting,” he says.

One pizzeria they visited sported a box from the distributor Roma Foods. “It said ‘Tour of Italy,’ and it had a picture of the Ponte Vecchio in Florence,” he remembers. Enticingly, the side of the box said it was “Volume Two.” Wiener pauses to mime a gasp. “It was like, ‘Volume Two?’ What’s One, and is there a Volume Three and Four?”

“Obviously, this was collectible,” he adds. “But I don’t think anybody else took the bait.”

In 2010, his collection kicked off, during his second year of running a fundraiser that donated money from dollar-slice pizza sales to hunger-relief organizations. While Slice Out Hunger has been a non-profit since 2015, back then, its success was not so assured. “Foolishly, I thought, ‘We need a reason for people to show up to this thing,’” Wiener remembers. “I forgot that dollar slices of pizza would be enough.”

So, he put out a call for interesting pizza boxes. At the event, he attached them to the venue’s white walls like paintings in a museum. But afterwards, the boxes kept coming, from people who heard about his collection. “I get packages every week,” he says.

Over Zoom, from his Brooklyn apartment, he digs through a sliding tower of boxes to show me his treasures. “Someone sent me this out of nowhere,” he says, tilting a tiny McDonald’s-branded pizza box towards his screen. “I don’t even know how she got my address.” The box is a remnant of when the burger brand jumped on the pizza bandwagon in the ‘90s. Another box, from Pizza Hut in the United Kingdom, is made of cardboard but can serve as a projector with the addition of a smartphone.

One Italian pizza box he owns is decorated in full color like an oil painting—the eerily detailed face of the baker on its lid reminds Wiener of George Clooney. But such individualistic boxes aren’t the norm, as many mom-and-pop pizza joints buy boxes from wholesale distributors who largely stick to a few clip art-esque motifs: the chef making an A-ok gesture, Italian monuments, or happy cooks in chef’s whites.

Designs change from generation to generation, and even from region to region. One box Wiener shows me is a “Chicago folder.” It’s designed to be dismantled and lay flat, making it easier to scoop up slices of the city’s deep-dish pizza. On the East Coast, the solid Walker-style pizza box is the norm, held together with a thick cardboard lip in the front of the box.

Despite their differences, the material of choice is corrugated cardboard. That’s only as of the 1960s, Wiener notes. Before that, many pizzas were considered a baked good, and bakeries plopped them in floppy pastry boxes. Even earlier, they were simply sheathed in paper bags. But when pizzas got bigger and sold in greater volume, Tom Monaghan, the founder of Domino’s, championed the thick corrugated cardboard box, which was sturdier and could be stacked.

Since then, pizza box manufacturers haven’t wavered too much from the standard square. But Wiener has some interesting prototypes in his collection, including Apple Inc.’s bespoke pizza box for employees, shaped like a round, white clamshell with a hinge, and a flappy, inflatable pizza bag from Denmark. But he doesn’t expect either style to take off soon.

“Pizzerias are notoriously not good at changing things,” he says. During the pandemic, he’s noticed, delivery-focused parlors have done well, while those that historically have relied on dine-in service have struggled.

Wiener himself has had to adjust. He’s making his own pies, but missing physical shops. “The people and the smells and everything else,” he says. Instead of his in-person pizza tours around New York City, he’s moved to offering online pizza-history classes and pizza-making tutorials nearly every night. Plus, according to Wiener, Slice Out Hunger, in collaboration with the pizza delivery app Slice, has sent more than 25,000 pizzas to front-line health care workers and first responders around the country. “When I hang up, I’m going to order tomorrow’s pizzas,” he says, noting that they’ll be headed to dozens of hospitals.

He’s currently looking for more volunteers to call health-care centers to ask if they’d like some pizza relief. And hopefully he’ll get them. But when it comes to collecting pizza boxes, he’s a community of one. “There are zero other people who collect these boxes,” he says wistfully. “There’s no one saying, ‘Oh, I’ve got five McDonald’s boxes, I’ll trade you for that Disney box.’”

In 1920 the "bad-man rendezvous" of Jackson, Wyoming, elected an all-female government. Will it be another hundred years till that happens again?
pizzacollectionsfood

Help us keep them coming by directly supporting Atlas Obscura.
Become a Member
$5/month $10/month $20/month
See All Membership Options
Already a part of our membership program? Sign in.
No Thanks
Keep Exploring
collections

One Man’s Quiet Quest to Collect Every Local Banana

In American Samoa, some delicious varieties are getting harder to find.
collections

Grown in the volcanic soil around Mt. Vesuvius, these tomatoes are one of only a couple varieties used in authentic Neapolitan pizza.
Gastro Obscura

This pollen-based candy comes from the marshes of southern Iraq.
Related

Once, Americans rode the rails for charbroiled steak, golden French toast, and prunes.
Read more
Thanks for sharing!