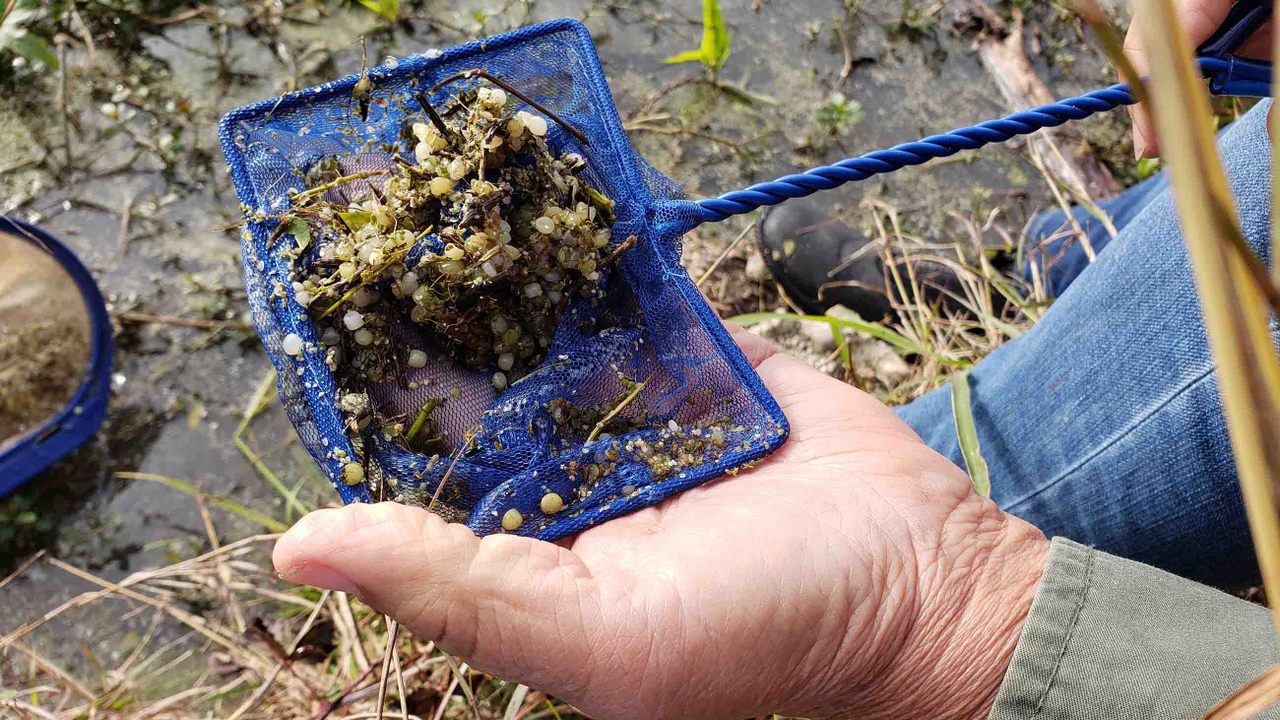 So many nurdles. Julissa Treviño
In This Story
Destination Guide

This story was originally published by Undark and appears here as part of the Climate Desk collaboration.

Last September, Jace Tunnell discovered a layer of tiny, round plastic pellets covering a beach on Padre Island off the southern coast of Texas. There were “millions of them,” he recalled, “and it went on for miles.” Tunnell, a marine biologist, knew exactly what the pellets were, but says he had never actually seen them before.

They’re called nurdles, and they’re the pre-production building blocks for nearly all plastic goods, from soft drink bottles to oil pipelines. But as essential as they are for consumer products, nurdles that become lost during transit or manufacturing are also an environmental hazard. In the ocean and along coastal waterways, they absorb toxic chemicals and are often mistaken for food by animals. They also wash up by the millions on beaches, leaving coastal communities to deal with the ramifications.

Researchers say nurdles—which weigh approximately 20 milligrams each—are found virtually everywhere. It is estimated that more than 250,000 tons enter the ocean annually. In February, Fidra, an environmental group based in Scotland, reported nurdle pollution in 28 of the 32 countries they surveyed, from Ecuador to South Africa.

“Pellets have been around and have been lost since plastic started to be produced,” says Madeleine Berg, a project manager for Fidra, which is working to reduce plastic waste and chemical pollution. And as plastic production continues to rise, researchers worry that the threat to beaches and coastal regions is growing worse.

The Gulf Coast of Texas, where several nurdle spills have occurred since last fall, is particularly vulnerable to marine debris. Most of the year, a longshore current heads south along the northern Gulf and another current heads north along the southern coast. “So it just pushes everything up on shore,” says Tunnell, who is director for the Mission-Aransas National Estuarine Research Reserve. This results in “some crazy amount of debris showing up.”

According to a study published in February by Tunnell’s colleague Kathleen Swanson and other researchers, accumulation rates of plastic pollution are 10 times higher in Texas than other Gulf Coast states sampled over a year-and-a-half period.

Texas is also a major producer of plastic pellets. According to a Texas Commission on Environmental Quality document obtained by Tunnell, there are 46 companies in Texas with permits to manufacture plastics materials and synthetic resins; many are on the Texas coast.

In a place like Padre Island, an important ecosystem for nearly 200 species of fish and almost 400 species of birds, including some endangered, nurdle pollution is a serious concern. Research shows that nurdles can absorb chemicals like DDT, a now widely-banned insecticide; PCBs, a group of manmade industrial chemicals; and mercury. And if marine animals like turtles ingest the plastic instead of the food they need, it can clog their digestive systems and eventually cause them to starve to death.

Surprised at the sheer number of nurdles on Padre Island last fall, Tunnell organized a local citizen scientist group called Nurdle Patrol, in which volunteers survey a beach or coastal area for 10 minutes and collect as many pellets as they see. They then send the location, date, and count, along with pictures, to Tunnell, who has been mapping out the surveys. Since November, more than 200 volunteers who have collected nearly 700 samples.

Tunnell’s map of Nurdle Patrol samples shows that the locations of plastic pellet manufacturers overlap with the largest amount of nurdles found on the coast, in the town of Port Lavaca and the Houston area.

In Point Comfort, just around 100 miles north of Padre Island, residents have sued Formosa Plastics, a known nurdle polluter, for violating the Clean Water Act and its Texas Commission on Environmental Quality permit. They want Formosa to pay $184 million in penalties, the maximum allowed by the Clean Water Act. For more than three years, Diane Wilson and two other local volunteers have collected more than 2,400 samples of nurdles and pellet powder discharged illegally by Formosa’s 2,500-acre Port Lavaca facility.

In a creek next to the facility, where the small white beads stand out against the darkness of the sediment, nurdle pollution is obvious. “I think a lot of the pellets or ‘the nurdles’ get caught in the vegetation,” Wilson said. When she bends down to grab a sample of soil — used as evidence in the lawsuit — hundreds of nurdles come up with it.

Wilson’s suit went to trial in March, and last week, a federal judge ruled that “Formosa had historically and continues to violate” the Clean Water Act and its discharge permit. As the Texas Tribune reported, the judge also said Formosa has failed to report violations to authorities since 2016, which is a separate violation, and that TCEQ has failed to bring Formosa into compliance.

Attorneys will argue in July how much Formosa should be fined, and Wilson says a decision will be announced in August or September.

Often, however, there are few repercussions for polluters, given the challenges of tracing the nurdles back to their origin and tracking down offenders. There is also no database of manufacturers who make plastic pellets and where they ship.

Even so, researchers can generally tell if nurdles are from a new spill. Resin, the core ingredient of plastic, turns yellow in the sun over time, so dark, dingy pellets are typically older than white ones. This can help determine whether a new spill has occurred or whether nurdles that have been out in the ocean for a while are simply washing up on shore.

Evidence can be tricky to gather, however, depending on where the pollution takes place. Within days of the arrival of white-colored nurdles in September on Mustang and Padre Island beaches, which are drivable and also regularly graded, most had been covered up or pushed up against the dunes. And even when nurdles can be traced to a single spill, manufacturer, or location, there is seemingly little to no legal framework for regulating plastic pellet production.

In 2007, California passed a law intended to prevent the discharge of nurdles into waterways across the state. But more typically, laws that regulate pollutant discharge apply to pollutants like solid waste in general, not nurdles specifically.

Under the federal Clean Water Act, manufacturers can still discharge a certain amount of pollutants into waterways as long as they have a permit. “[Even that] actually allows them to release a reasonable amount,” Tunnell said.

In addition, it is often unclear who is responsible when pollution crosses international borders. In 2017, for example, a storm caused containers filled with roughly 54 tons of nurdles to fall from a ship in Durban, South Africa. By the time the South African authorities began their cleanup attempts, the nurdles had already begun making their way to Australia, and were estimated to arrive about 450 days after the spill, according to Harriet Paterson, a professor at the University of Western Australia who is studying plastics in the aquatic environment.

“For the last 60 years, nurdles have been spilled into the ocean, but we don’t know who the polluter has been or where the pollution has happened,” she said. “So, the significant thing about the [Durban] spill is we know the point source of the pollution and the size of the spill.”

As for cleanup efforts, there is no effective way of removing large numbers of nurdles once they’re out in the environment, says Berg of Fidra. “You’re talking about billions and trillions of pellets,” she said. “If you were trying to collect those up, you would probably be collecting a huge amount of [natural debris], which would include a lot of, you know, sea creatures that you don’t want to be removing, lots of organic material,” Berg cautioned. Even when cleanup efforts are successful, Berg added, “what we find is that often they end up being replaced by more pellets, quite soon after.”

Nurdles can be lost at any point during the production and shipping stages. The pellets are manufactured by petrochemical companies and transported by train, ship, or truck to facilities where they are melted and shaped into a final plastic product. “They tend to kind of ping everywhere and get blown easily by the wind,” Berg said. “And if they’re not very well managed… then that can easily lead to leaks into the environment.”

Through an industry-led program called Operation Clean Sweep, manufacturers can opt to follow guidelines and best practices to achieve zero pellet, flake and powder loss. But the program is voluntary and there is no external check to make sure companies are complying.

Meanwhile, experts say the demand for plastic production, now estimated at 335 million tons annually, is growing, which means the demand for nurdles is also on the rise. “More companies have best practices in places than they used to,” Berg said. “But at the same time, we’re still massively increasing the amount of plastic that we use, produce, manufacture, every year.”

Tunnell is bracing for what that could mean locally. A dozen new U.S. facilities or expansions—nearly all of them in Texas—are expected within the next three years, according to information obtained by Tunnell from ICIS, a petrochemical market research company. “Seventy-five percent of the facilities that are either expanding or new are in Texas, out of the whole country,” he said, adding that at some point, there will inevitably be a spill that can be traced back to its source.

Because of that potential, education has been a crucial part of citizen scientist projects like Tunnell’s. In addition to presentations to his local community, Tunnell visited all five Gulf states in May to collect samples and expand his Nurdle Patrol program.

“Look, there’s a problem that needs to change,” he added, “and it’s been going on for decades.”

It's a long shot—but if you're keen to look, here's how to start.
plasticpollutionoceans

All praise to the tireless continuous plankton recorder.
telephones

Solved: The 35-Year-Old Mystery of the Garfield Phones on a French Beach

A storm, a secret cave, and an ocean full of plastic.
oceans

The Artist Making Tapestries Out of Aquatic Trash

Jo Atherton's colorful works turn our plastic crisis into a meditation on memory and time.
Want to see fewer ads? Become a Member.
From Around the Web
THE GASTRO OBSCURA BOOK
Taste the World!
An eye-opening journey through the history, culture, and places of the culinary world. Order Now