Solved: The 35-Year-Old Mystery of the Garfield Phones on a French Beach - Atlas Obscura
Want to see fewer ads? Become a Member. 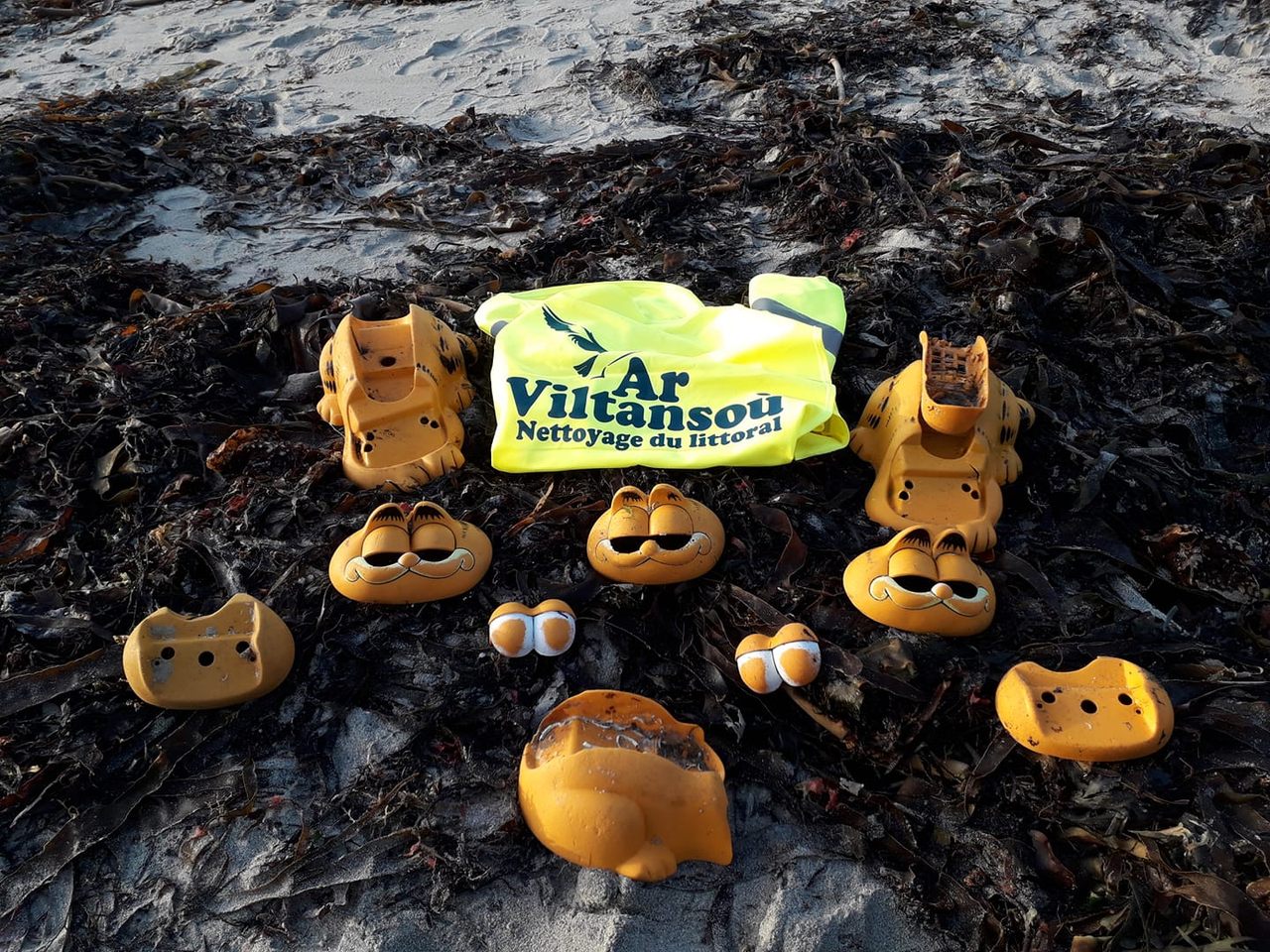 Pieces of these phones have been washing up on a Brittany beach for more than 30 years. Claire Simonin-Le Meur/Ar Viltansoù

For decades, a singularly strange thing has been washing up on a particular stretch of the Brittany coast in France. Bright orange pieces of plastic—telephones in the shape of Garfield the cat.

“I have friends who tell me their memories of when they were little kids, they were already finding telephones,” says Claire Simonin-Le Meur, the 40-year-old president of the volunteer association Ar Viltansoù. The group, whose name means “the kids” in the regional language Breton, clears trash from the beaches once a month.

Mostly they find fishing debris, with markings that show that it comes from as far away as Florida. But every time they go out, the volunteers find pieces of these telephones. They had started to appear some 30 years ago, and still, in 2018 alone, the volunteers counted more than 200 fragments. They appear remarkably intact after presumably decades in the water, retaining the cartoon lines and stripes, and sometimes attached bits of internal wiring and electronics. The association keeps all of them and they have become a local symbol of the global problem of plastic pollution.

The model was sold by the American toy company Tyco.* Garfield’s eyes opened when the receivers were lifted and shut when the phone was hung up. Presumably they love lasagna and hate Mondays.

Contradictory rumors about their origin had always circulated locally, mostly that the phones came from a shipping container that had been lost overboard in the 1980s. Earlier this year, the French news outlet FranceInfo ran a story about the mysterious telephone parts. Shortly afterward, Simonin-Le Meur ran into a man, René Morvan, while they were removing a group of dolphins beached on the coast.

He told her he knew where the phones were coming from. And he could show it to her.

“I didn’t really understand,” she says, “because I was thinking the container was underwater and this gentleman didn’t look like a diver.”

But Morvan, a 57-year-old farmer who owns the land adjoining the public beach, told her about a bad storm that occurred around the time he was around 20. That was when the Garfield telephones first washed up all over the beach, and he and his brother went to investigate. They found the remains of a shipping container lodged in a cave in the cliffs, one that was often submerged, but sometimes revealed at low tide.

Along with the Garfield-shaped phones, the container had also held televisions and a quantity of red wood. After several weeks of bad weather, Simonin-Le Meur and a half-dozen other volunteers were able to access the cave’s entrance at low tide, on March 22.

Up against the algae-covered rocks at the cave entrance, “We found pieces of metal, which were pieces of the container,” she says, with signs of rust. The group also found “lots of fragments of telephone. So, we knew we were in the right spot.”

There were hundreds of pieces, including dozens of handsets, their buttons intact and many still clearly showing their numbers. Finally, Ar Viltansoù had solved the mystery, though some members speculate about the existence of a second container, that might account for the different locations where the phones have come ashore.

The somewhat charming mystery of the cartoon phones appears to be solved, but the tale takes on a darker note in the context of an increasingly visible crisis of plastic in the world’s oceans—microplastics in particular. Too small to see with the naked eye, these remnants, which the unrecovered phones will eventually break down into, will long be a part of the marine food chain.

“They say in 400 years the plastic will degrade,” says Simonin-Le Meur, “which is to say instead of big, visible pieces of plastic, it will be present in small quantities everywhere, in the water, in the air, in the sand.”

And that’s not to mention the toxins that may be leaching into the water from their electronic components.

Imagine, she says, the state of the planet, with thousands of containers going overboard each year. FranceInfo, which accompanied the group’s expedition to locate the source of the telephone parts, reported that somewhere between 1,500 and 15,000 containers are lost at sea each year. Off the coast of France, these included a 1993 release of pesticides, sulfur, and nitrocellulose, a highly flammable component of gunpowder.

Though toxic, such spills are quickly forgotten. But the Garfield phones, Simonin-Le Meur notes, optimistically, “speak to people, because it’s Garfield, a cartoon character, it seems nice.”

She hopes “they’ll open their hearts to this subject that doesn’t usually interest them and that will really make them hear what we’re telling them.”

* Update: In the United Kingdom, the phone was sold by the brand TeleConcept. Readers have pointed out that these may be U.K. models.

Scientists Dropped Dead Gators to the Seafloor to See What Bites

All praise to the tireless continuous plankton recorder.
oceans

The Artist Making Tapestries Out of Aquatic Trash

Jo Atherton's colorful works turn our plastic crisis into a meditation on memory and time.
Want to see fewer ads? Become a Member.
From Around the Web
THE GASTRO OBSCURA BOOK
Taste the World!
An eye-opening journey through the history, culture, and places of the culinary world. Order Now