Holed Up in a Portuguese Cave, Neanderthals Supped on Seafood - Gastro Obscura
Want to see fewer ads? Become a Member. 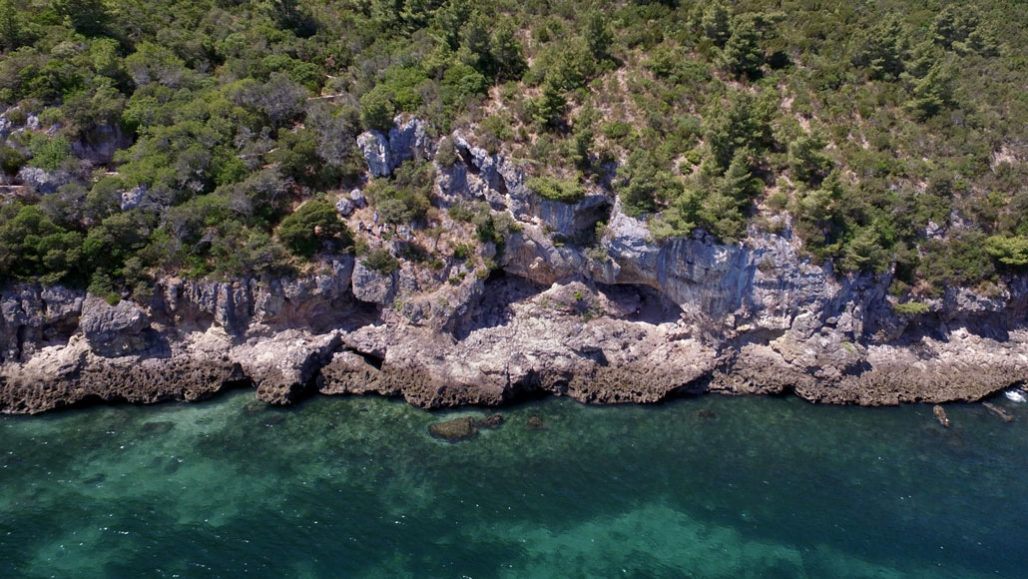 The Figueira Brava cave in Portugal, where Neanderthals had their pick of fruits de mer. Zilhão et al. 2020
In This Story
Destination Guide

On a mountain range in western Portugal, in a cave high above the modern coastline, a remnant of the ancient seashore can be found. The cramped, low-ceilinged grotto, which lies on a peninsula about 20 miles south of Lisbon, holds a diverse and decadent marine menu enjoyed by ancient humans—and further proof that Neanderthals weren’t the knuckle-dragging dimwits we’ve long imagined.

Clam. Crabs. Seabirds. Seals. Perhaps dolphins. Certainly sharks. All were par for the course for the Neanderthals of what is now coastal Portugal, as researchers discovered during a dig that stretched from 2010 to 2013.

But that wasn’t all they found. There were also horse bones. Ibex remains. Deer. Aurochs (a giant cousin of cattle). Even a porcupine (ouch!). All were detailed in a recent study, conducted by a multinational European team and published last month in the journal Nature.

The culinary cornucopia provided a swath of new information on Neanderthal diets, exposed in the middens (ancient rubbish heaps) inside the Figueira Brava cave. When Neanderthals occupied the site, about 100,000 years ago, the cave was roughly a mile from the coast of modern-day Portugal.

Some of the food may have been scavenged, but much of it—including the sharks, which could be speared in shallow waters or sourced from isolated tidepools—would have been within Neanderthals’ capacity to hunt. The assemblage represents a different diet than most ancient humans ate, and what would have been on the menu for the coastal Neanderthals’ inland neighbors—a combination of woolly rhinoceros and mammoth, among other large steppe mammals.

The cave findings broaden our understanding of Neanderthals’ complex behaviors. Evidence of early modern humans—people more like us than Neanderthals—eating seafood stretches back 160,000 years in South Africa. But as João Zilhão, an archaeologist at the University of Barcelona’s Catalan Institution for Research and Advanced Studies and the lead author of the paper, points out, it may have been assumed that Neanderthals didn’t have similar preserved marine eateries because, until now, none had been found.

“On the positive side the evidence [of early humans eating seafood] existed,” he says. “And on the negative side, no such evidence existed among the Neanderthals. So it all fit together in this very neat narrative. How the chosen people become the lords of the Earth.”

Poor Neanderthals. On their discovery—in a German quarry, back in the early 19th century—the ancient humans were construed as lumbering oafs: “cavemen,” if you will. Only recently has their fossil record come into focus, and more open-minded interpretations of archaeological sites begun to give them their due.

This isn’t the first time Neanderthals have surprised us with the lengths they would go to for food. In January, shells found in an Italian grotto suggested that the earlier humans were leaving their cave shelters to dive for clams on the Mediterranean seabed.

Neanderthals were artists too. An earlier study of Zilhão’s identified the earliest known cave art in Europe as their work.

Yet they’ve been imagined as a backwards branch on the evolutionary tree since the first Neanderthal skull emerged from the German valley that gave them their name. Archaeologists like Zilhão have been trying to fix that misconception ever since.

“For some people, the notion that Neanderthals were a different species [than Homo sapiens], and less capable, is a matter of belief,” he says. “And therefore they are impermeable to facts and reason.”

Figueira Brava is another stepping stone in Neanderthals’ long walk to grace. Along with artistic capabilities, caring for loved ones, and physical prowess, a diverse, delicious appetite can now be added to their repertoire.

In the absence of stone tools, bivalves would have to do.
caves

The limestone cliffs harbor hundreds of passages that offer glimpses into the distant past.
Video • PinDrop

The history of drinking is told through 1,800 cups, chalices, and glasses at this exhibit.
São Miguel, Portugal

Ring the bell to enter a bar that looks equal parts museum and old curiosity shop.
Want to see fewer ads? Become a Member.
From Around the Web
Atlas Obscura Trips
Lisbon: Tracing the Roots of an Imperial Cuisine
View This Trip
Thanks for sharing!