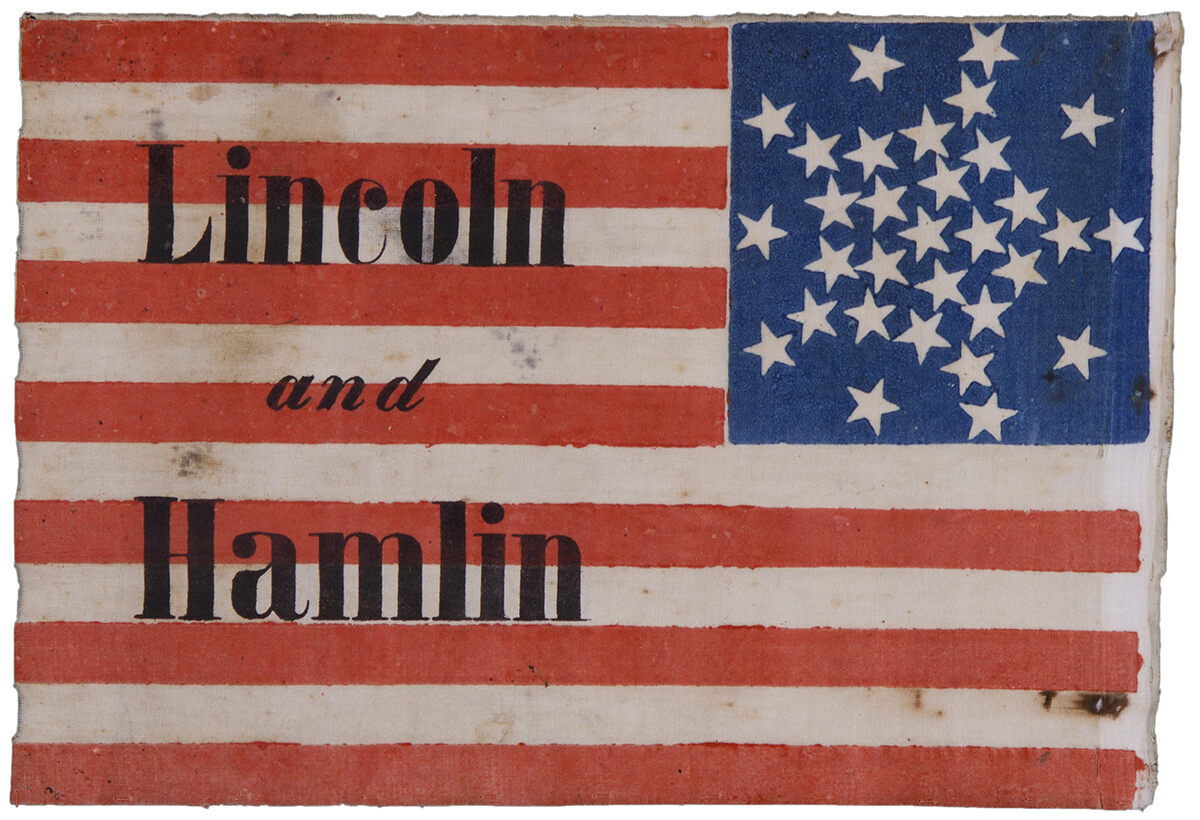 Abraham Lincoln campaign flag, 1860. "Until the design of the American flag was standardized in 1912, flagmakers enjoyed creating their own arrangements. This flag has an unusual “Great Star” pattern, a star formed from individual stars." Collection of Mark and Rosalind Shenkman.

President William Henry Harrison may be best known, rather unfortunately, for being the country’s shortest serving president. But he’s also credited with two other unusual facts. It’s because of Harrison that we have the phrase, “keep the ball rolling”, which he adopted after his supporters pushed a ball of tin from Cleveland to Columbus. We can also thank Harrison for election merchandise; his campaign of 1840 has been regarded as the first marketing-savvy campaign, complete with symbols, slogans, songs and souvenirs.

Even in the beginning, this effort contained name-calling and spin. The Democrats portrayed Harrison as a backwards and unsophisticated, and even took a shot at his mother: “Why he’s just a backwoodsman. He eats corn pone [corn bread] and drinks cider. His mother still lives in a log cabin.” But Harrison’s campaign just embraced the “man of the people” image and even adopted the log cabin as a symbol—despite the fact that Harrison had been raised to a wealthy family on a Virginia plantation.

For Harrison’s supporters, there were campaign songs and plenty of merchandise, including neckties, whiskey decanters, pitchers and flags. In fact throughout the 19th century, flags played a key role in political campaigning, which is the subject of a new exhibition at the George Washington Museum and The Textile Museum.

While the exhibition does focus on flags, there are also other textile-related ephemera—such as the unexpected presence of political throw pillows. One of the more unusual items relates to Theodore Roosevelt, where the candidate is depicted inside a red heart. It was, according to the Museum, designed for women to buy and display at home to influence male voters. Somehow, women were deemed worthy of election merchandise marketing—even before they got the the right to vote.

Here is selection of images from the exhibition, which runs through to April 10, 2017.

The Beautiful, Forgotten and Moving Graves of New England's Slaves

The job was meant to be capturing official handshakes, but it turned into documenting history.
caves

Wilson Bentley was the first to claim that each snowflake is unique—and provided evidence.
roadside attractions

A photographer captured the handmade, the unusual, the downright puzzling.
Video • Object of Intrigue

The Photographer Who Captured Black Voters for Decades in Pittsburgh

The archives of Charles "Teenie" Harris are a treasure trove of political history.
Read more
Thanks for sharing!