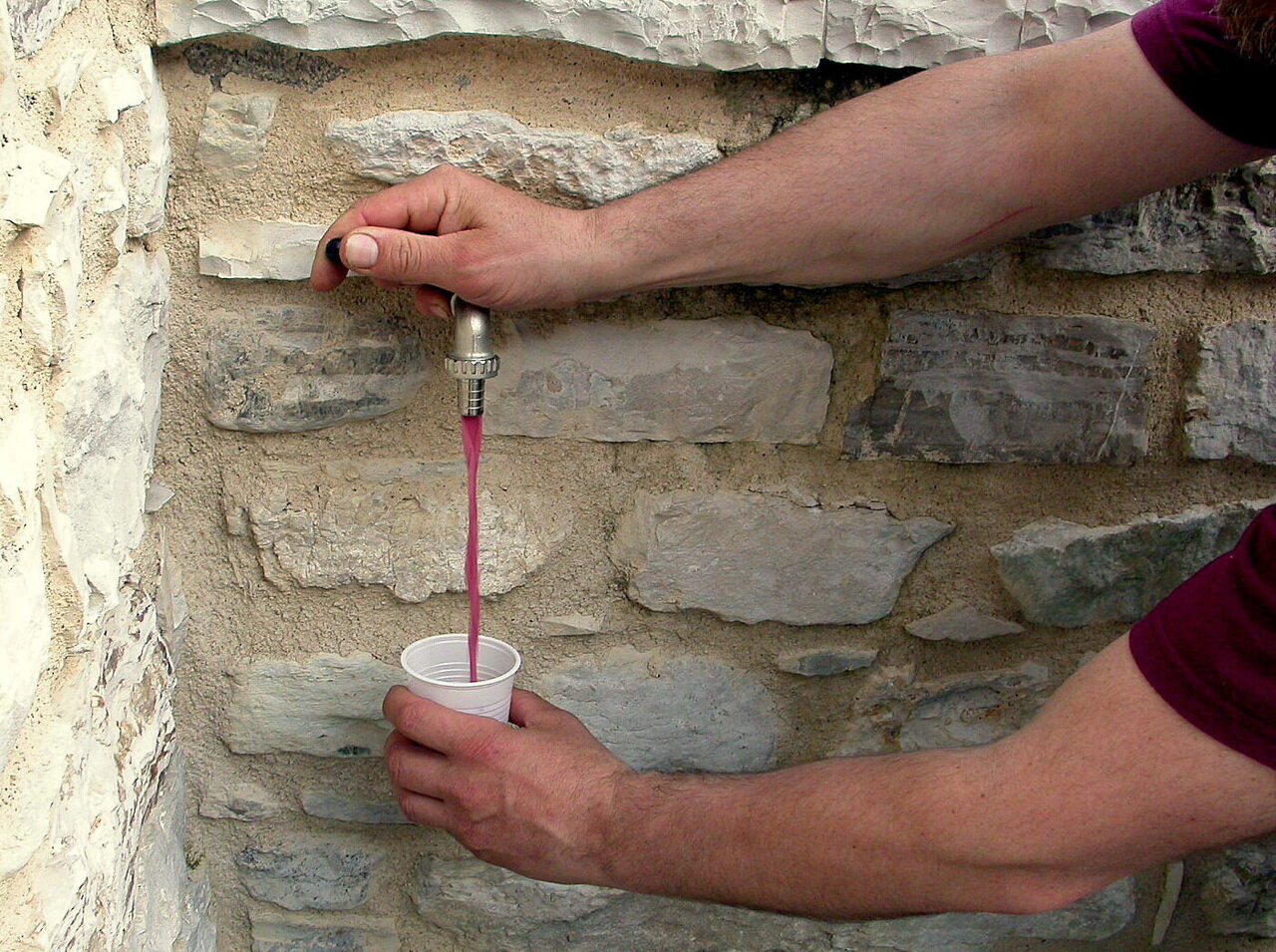 The situation in Castelvetro di Modena looked like this staged shot. Nardino/CC BY-NC-SA 2.0
In This Story
Destination Guide

On the morning of March 4, a neighborhood in the Italian town of Castelvetro di Modena awoke to a startling surprise. When residents turned on faucets and showers, a rush of fizzy, crimson liquid splashed into sinks and tubs.

In the 20 affected homes, they initially recoiled in alarm, reports the Modena newspaper, Gazzetta di Modena. But a familiar fruity odor—violets, strawberries, fresh plums, and cherries—lured them closer. The liquid proved a mix of water and sparkling red wine.

Specifically, it was Lambrusco Grasparossa from the nearby winery Cantina Settecani. The blend bears Italy’s second-highest geographical distinction and is made from at least 85 percent eponymous grapes. A celebrated regional specialty, its lineage dates to the Etruscans. Abroad, however, backlash from an early-1980s boom of cheap, mass-produced Lambrusco led to a mistakenly poor reputation.

Locals reportedly responded to the development by filling all available empty containers. Some went on to phone town officials. Others, the winery. Some of the clients who called to warn Cantina Settecani about the situation, commercial manager Fabrizio Amorrotti told CNN, gleefully confessed to capitalizing on the mishap.

The intoxicating dilemma lasted about three hours. The winery lost around 1,000 liters of wine.

The culprit behind the bizarre, boozy leakage? Castelvetro water officials and winery staff traced it, essentially, to failed circuitry in the winery’s bottling plant. According to Amorrotti, malfunctioning valves partnered with pressure differentials to cause the wine, which was stored in a large silo, to shoot through water lines and be diverted into surrounding homes.

Thankfully, the situation was determined to have posed no health risks. According to the Gazzeta di Modena, the town has released statements saying measures are being taken to protect against similar failures in the future.

Not all residents were appeased.

We should not be laughing at this, said Enrico Magnus, a resident of Modena, in translation, in Facebook posts and the comment threads of a related story in the Gazetta di Modena. He described the event as disturbing and called on officials to conduct investigations that would ensure the problem wasn’t systemic. “What’s to stop a madman from [exploiting such weaknesses and] making a massacre?”

Still, considering the town’s location in northern Italy amid the epicenter of the nation’s coronavirus crisis, Mezzacqui chose to see a silver lining in the disruption. The town is typically a magnet for gastronomic enthusiasts, and residents rely heavily on tourism for their livelihood. But the recent COVID-19 outbreak has led would-be visitors to cancel more than 80 percent of bookings. Nationwide travel bans have worsened the situation. Owners and employees at local restaurants, wineries, shops, and countless other businesses are suffering.

“At a time when we have very little to smile about, I’m glad we could bring some levity to others,” Mezzacqui told CNN. Hopefully, at some point in the future, she added, people will remember this incident with a smile and decide to visit the beautiful town of Castelvetro.

It revives a centuries-old tradition.
wine

The writer was concerned about the rise of binge-drinking bros.
world record

The World's Largest Bottle of Wine Just Spilled in Austria

In 1936, the Party suddenly switched from denouncing bubbly to mass producing it.
Video

By the 21st century, one lone woman held the recipe for what might have been da Vinci’s cheese of choice.
Gastro Obscura

Some Sicilians start their day with this decadent combination.
Gastro Obscura

This jewel-toned Sicilian and Maltese specialty is so sweet, it’s hard to believe it comes from a spiky cactus.
Want to see fewer ads? Become a Member.
Related

Successful sips were signs of nobility.
Read more
Thanks for sharing!