Has the Case of the Missing Princess-Saint Been Solved? - Atlas Obscura
Want to see fewer ads? Become a Member. 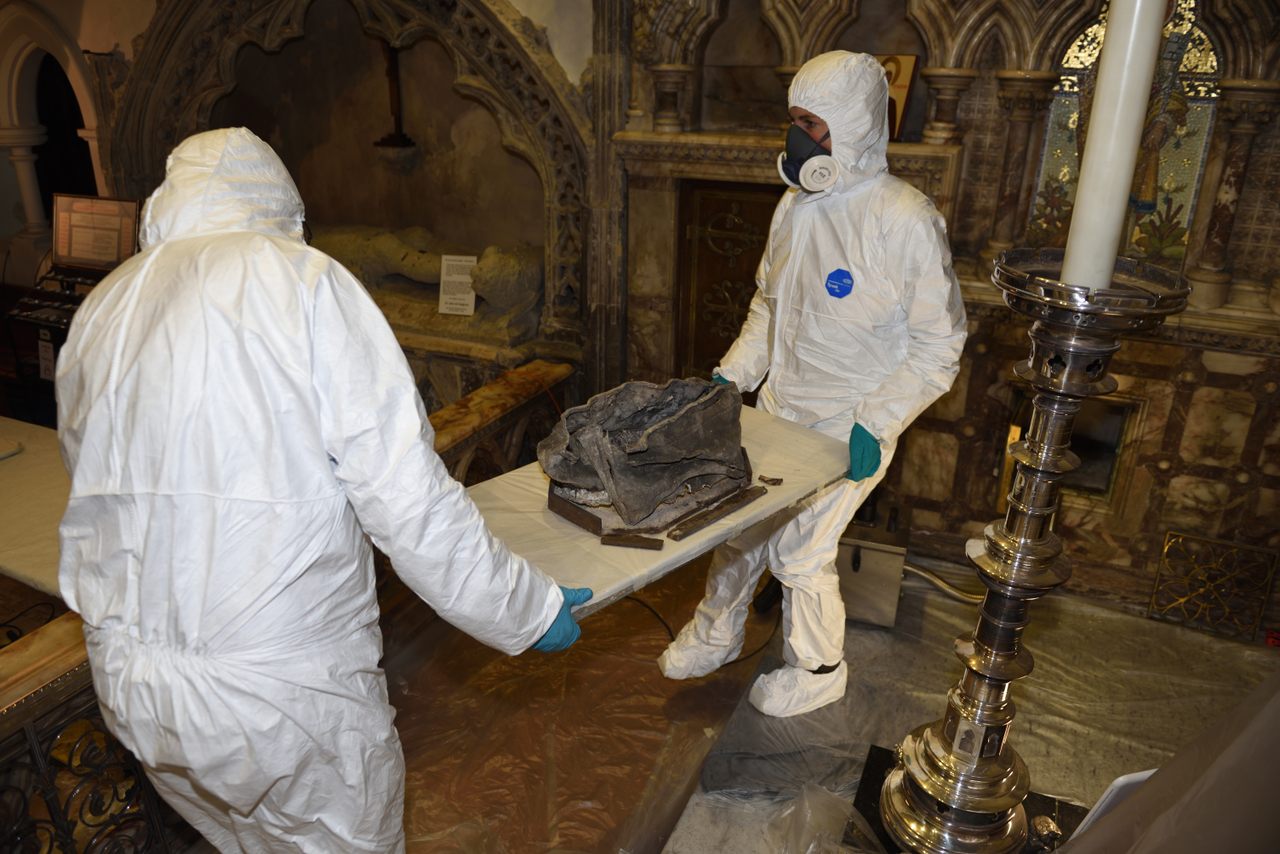 When a church becomes a laboratory. Courtesy Andrew Richardson
In This Story
Destination Guide

If the walls in the Church of St. Mary and St. Eanswythe could talk, it would probably be in Old English.

Researchers recently announced that bones found in those walls likely belonged to Eanswythe, an Anglo-Saxon princess from the seventh century and patron saint of Folkestone, the southeastern English town in Kent County where the church is located. While the bones themselves were discovered in 1885—launching much speculation that they were the princess’s remains, missing for centuries—this latest research provides the first empirical evidence that they did indeed belong to the namesake of the church.

Back in January, researchers from the Canterbury Archaeological Trust and the Finding Eanswythe project closed the Folkestone church for four days to convert it into a temporary makeshift laboratory. “We set up in the nave just in front of the altar, and also in the adjoining vestry,” writes Andrew Richardson, of the Canterbury Archaeological Trust, in an email. “This meant that apart from a few teeth and small bones sent for lab testing, none of the relics needed to leave the church.” Richardson estimates that approximately 50 percent of the skeleton is accounted for.

During that first round of analysis in the church, the researchers saw some intriguing clues as to the identity of the remains. First, the lead box in which the bones were contained was dated to the eighth or ninth century, closer to Eanswythe’s death than the church itself, which was constructed in the 12th century. Second, the enamel on the teeth showed no signs of malnutrition, suggesting that this person was well-nourished and of high social status. Third, and most important, the bones came from one person rather than several (as is often the case with relics and such old burials), and the pelvis and skull revealed that that person was most likely a woman.

But the most important findings came back from the lab at Queen’s University in Belfast, where a tooth and a foot bone underwent radiocarbon dating. Those test results were consistent with the common view that Eanswythe died in the 650s or 660s. “It is very hard to imagine why these remains would be anyone other than Eanswythe,” writes Richardson, “given the multiple historical references between the 10th-16th centuries that place her in Folkestone and, from 1138, in this church.” Indeed, “the earliest Anglo-Saxon documents that mention her,” he writes, “say she ‘rests in Folkestone.’”

According to the Finding Eanswythe project, Eanswythe was probably born around 630, likely the youngest child of the Kentish King Eadbald. It’s hard to put a precise date on it, but sometime during the seventh century a “minster”—or church built as part of a monastery—was founded at Folkestone. It’s possible that the minster was built within Eanswythe’s lifetime, and that she was indeed its founding abbess, as tradition holds; it’s also possible that it was established after her death. Either way, she could be one of the founders of female monasticism in England. It’s one of the reasons she occupies a position of such prominence within Folkestone’s cultural memory. In fact, a 799 charter refers to the priory grounds as “terra sancta Eanswithe [sic].”

The current Church of St. Mary and St. Eanswythe was built in 1138, after the original minster was destroyed. Documents and basic deduction suggested that Eanswythe was buried in the original church, and then moved to the new one before being “lost.” In 1885, workers renovating the church found the bones within the walls, where they have stayed ever since, in a specially constructed alcove. Many assumed that the bones were proof of Eanswythe’s burial there, but Richardson was careful not to jump to that conclusion, wary of false relics that date to the founding of the church but are purported to be much older.

Removing the bones once more for research purposes was not merely an academic affair, but an emotional one as well, as some of the researchers slept in the church to guard the remains. Lesley Hardy—Finding Eanswythe’s project leader and a historian at Canterbury Christ Church University—is an ordained deacon in the Church of England, and began every morning of research by reciting prayers over the remains.

The next steps in the project should provide even more detail. A tooth is currently undergoing stable isotope analysis at Oxford University, and will then undergo further study with the British Geological Survey. These analyses could provide insights into Eanswythe’s diet, and by extension her environs; they may reveal, for example, that she did not always live in Kent. If the Francis Crick Institute can extract genetic material from the tooth, it may have clues to Eanswythe’s hair and eye colors, and perhaps something about her lineage.

A tomb in Myra adds to confusion over relics of the beloved icon.
churches

They were worn by someone very rich.
churches

Czechia’s ‘Bone Church’ Is Getting a Good, Thorough Cleaning

A team of experts will be restoring four decorative pyramids, made of human remains.
french revolution

Terror-Stricken in Paris: A Crypt of Bloodstains and Bones

4:16
Want to see fewer ads? Become a Member.
From Around the Web
THE GASTRO OBSCURA BOOK
Taste the World!
An eye-opening journey through the history, culture, and places of the culinary world. Order Now