How to Give Stolen Artifacts Back to Historic Sites - Atlas Obscura
Want to see fewer ads? Become a Member. 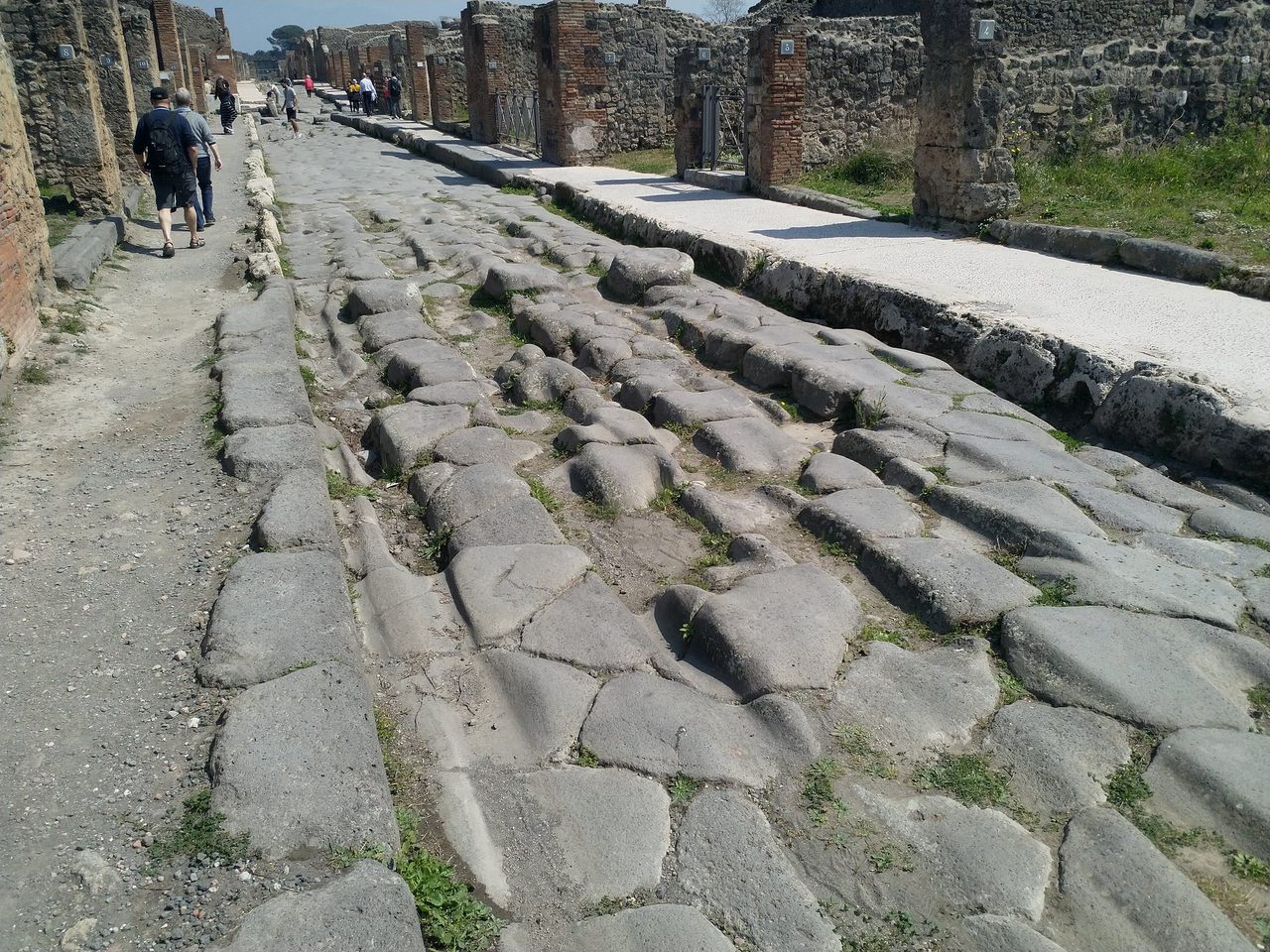 Visitors to Pompeii might pluck potsherds from the ground as souvenirs, but later come to regret it. Nick Hubbard/Flickr/CC by 2.0
In This Story
Destination Guide

In the year 79, Mount Vesuvius spewed scalding ash and lava across Pompeii and Herculaneum. As a pyroclastic flow surged, Pompeii was famously laid to ruin—its inhabitants killed, its homes and public spaces obscured under a terrible blanket. The city was snuffed out so speedily that many aspects of daily life were eerily preserved—a carbonized loaf of bread, delicate amulets and beads in a wooden box, even, scientists suspect, brain cells. Over decades of careful excavation, archaeologists have revealed dazzling insights into the city, attracting millions of tourists. And all that traffic has meant that many artifacts have gone missing, wandering away from the place they were buried for nearly two millennia.

In 2005, a Canadian woman visited Pompeii and made off with bits of an amphora, two mosaic tiles, and more. Fifteen years later, she had thief’s remorse and returned them by mail, The Guardian reported this month. After being besieged by health problems and financial woes, the paper noted, she believed the objects were cursed. “Please take them back,” she reportedly wrote in a letter accompanying the package. “They bring bad luck.”

This kind of archaeological pilfering has a long history. In the 1700s, before archaeology was a formal science, the king of Naples bankrolled digs at Pompeii to fill his palace with art-historical treasures. (These eventually formed the basis of the extensive collection of Pompeii artifacts exhibited in Naples, though that wasn’t what he had in mind.) From divers snatching bits of historic shipwrecks, to “nighthawks,” a contingent of rule-breaking metal detectorists, to organized theft rings that crack open ancient tombs, archaeological sites have long been targets for sticky fingers.

“Sadly, stealing objects from archaeological sites isn’t that unusual,” says Nick Booth, a committee member of the Society for Museum Archaeology, a specialist network in the United Kingdom. But stealing comes in several varieties. Morag Kersel, an archaeologist at DePaul University who studies cultural heritage laws and crime, distinguishes between looting—such as excavating a site with the intent to peddle the finds on the antiquities market—and the more impromptu, impulsive pocketing of objects. Both may be illegal, but the first is often strategic and deeply planned, while the second is opportunistic. “The tourist wants a keepsake, a memento of their visit, so casually picks up something from the ground,” Kersel says. “Usually something small, portable, and reminiscent of the trip so they can relate tales to friends and family when they return home.” For this crop, it’s about future nostalgia and the premium placed on “authenticity.” Eric Poehler, a classicist at University of Massachusetts Amherst who has done field work in Pompeii for more than 20 years, likens the impulse to crowding around the tiny Mona Lisa when there are perfectly persuasive facsimiles for sale in a gift shop. “It’s the idea that a place or a thing can hold more reality for people than a picture can,” he says. This collector isn’t trying to plunder a heavy cannon from a shipwreck or drag a marble table leg from Pompeii—they’re picking up coin-sized potsherds, he says, in the hope that when they look at the dirt-crusted fragments back at home, they’ll be transported somewhere else, a place of rich frescos and ancient stone streets.

It’s not that taking sherds is an enormous problem by itself, Poehler says. Pompeii is literally littered with them, he adds, “as valuable as broken dinner plates in the modern world.” Such a broken bit of pottery could probably never be pieced back together into an amphora, so “the loss to the site is immeasurably small—the harm is equally small,” he adds. But at a site that attracts millions of visitors, there’s no room for nuance at the level of “Take this, not that.” “If everyone were doing this kind of activity, we would find quickly that much would be missing,” Poehler says. “That scale is a problem.”

However these little bits of history wander away from where they belong, many people in possession of them do eventually wonder what to do with them. “I have not had anyone say, ‘I took this years ago and would like to give it back’ yet, but I have definitely had a lot of ‘I was cleaning out Dad’s old shed and found a bunch of stuff—what should I do?’” says Sara Ayers-Rigsby, director of the southeast and southwest regions of the Florida Public Archaeology Network, out of Florida Atlantic University. Over the years, Ben Thomas, director of programs at the Archaeological Institute of America, has fielded several letters from people who filched an object or inherited one from a family member—sometimes because they feel literally haunted by the action. “Some want to return it because they know it was likely removed illegally, but I have also had people worried about bad luck or curses,” Thomas says. In Kersel’s experience, the desire to return an artifact is often sparked by watching a show or reading an article about the impacts of unsanctioned collecting: “a pang of conscience,” Thomas says.

The trouble is, once an artifact is divorced from its archaeological context, it’s a lot less useful to researchers. “A scatter of flints could show where a Neolithic person spent time creating tools, and carefully excavated, it’s possible to even see how they were sitting—there could be gaps in the flint scatter where their legs were, for instance,” Booth says. A rim of a pot could suggest, for instance, where meals were cooked, or where feasts were held. Without the context of a site, objects are harder to interpret, and a site without objects isn’t as rich, either. Pocketed artifacts also typically aren’t curated or conserved in any way, and probably lack documentation to help researchers pin them to a place and time, says Della Scott-Ireton, associate director of the Florida Public Archaeology Network, at the University of West Florida. Without knowing precisely where they came from (and where they sat in the stratigraphy), “these things are useless for study or to add to our knowledge of the past,” she says.

But even orphaned artifacts have value—they can flesh out educational displays, for instance, or be stored for other kinds of research and archival efforts. And archaeologists appreciate the gesture of return, as well as the lesson it conveys about shared stewardship of history, says Scott-Ireton. “Most archaeologists just want people to learn why willy-nilly collecting is detrimental to science,” she says, “that these pieces of our heritage belong to everyone, and that they are all part of the puzzle that tells us about our common past.”

Sometimes people attempt a stealthy return. “At a previous job, we had someone leave a human skull in a cardboard box at the front desk with a note to say they’d found it in a relative’s house, who’d taken it from a church they were helping to demolish,” Booth says. “We had to call the police, and coincidentally it was around the time of Halloween, so they didn’t initially think it was true.” (Museum staff determined it had been interred at a Methodist chapel that was demolished after World War II, and reached out to arrange for it to be reburied at a local church.) In Florida, a museum doorstep was visited by a “phantom sherd dropper,” Ayers-Rigsby says—box after box of old ceramic pieces landed on the threshold. “It was incredibly problematic for several reasons, but even the volume of material was overwhelming.”

If you inherit an object that was likely stolen or you feel a twinge of thief’s guilt, Kersel recommends contacting the Cultural Heritage Center at the State Department, which can advise on next steps. Thomas suggests reaching out to State Historic Preservation Officers, who can also offer guidance. Scott-Ireton recommends contacting the site or the organization that manages the land it sits on. “They’ll let you know if they are interested in, or capable of, accepting it back into their collection,” she says. “We encourage that, and often the site or state or national park will accept the item back.” Internationally, Thomas says, objects with remarkable value are sometimes returned to an embassy or consulate.

Potential legal repercussions vary, Kersel says, and would likely depend on the scale and scope of the operation, such as whether someone had illegally imported scads of stolen artifacts or made off with a single sherd. Penalties vary by country—but sometimes there really aren’t any consequences. “Laws are in place to stop active looting and illegal trafficking in artifacts,” Scott-Ireton says, “not to punish former Boy Scouts for picking up an arrowhead.” Thomas agrees. “Honest mistakes and inherited objects of minimum value generally don’t cause much of a ruckus,” he says. But purging yourself of guilt—that might be really valuable. “If you feel badly because of something and it’s weighing on you,” Poehler says, “a trip to the post office and $50 in postage is a small price to pay to feel better about yourself.”

In Japan, ‘Theater for the People’ Makes Fandom a Part of the Show

Clues to who the 19th century Frenchman was can be read on his unusually preserved remains.
libraries

For decades, often using a fake identity, he stole antique maps worth thousands of dollars each.
caves

Scientists know people were in Yukon 24,000 years ago. But what were they doing there?
objects of intrigue

No one knows what it says.
Video • Wonder From Home