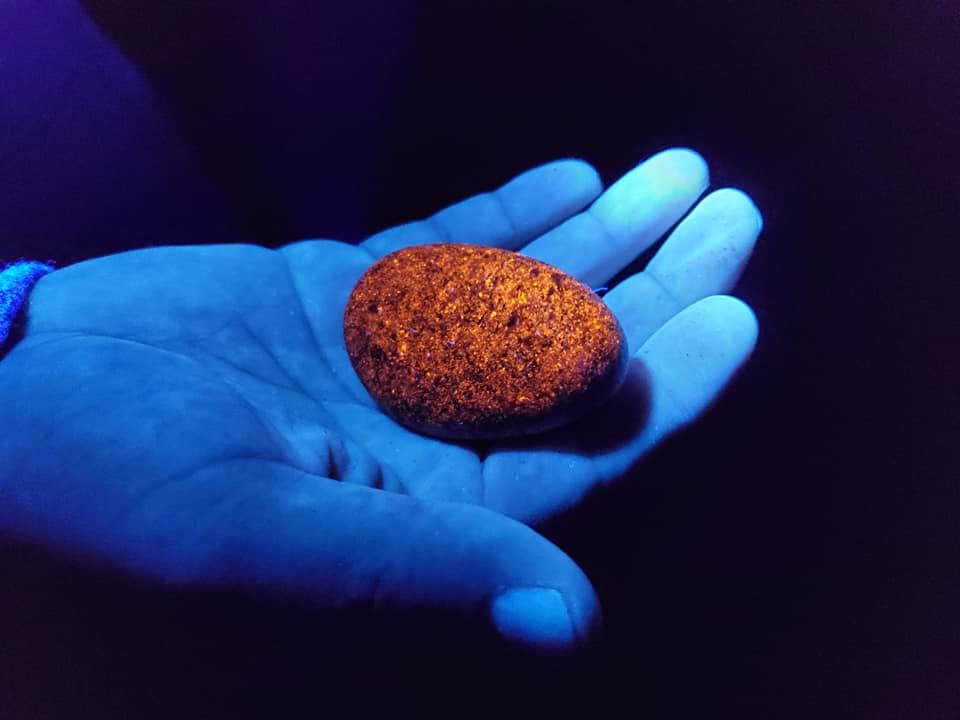 Under UV light, Yooperlites are transformed. Courtesy Erik Rintamaki
In This Story
Place

Fluorescent Rocks of Sterling Hill Mine

Hundreds of glow-in-the-dark objects light up a museum in a historic zinc mine.
Destination Guide

Look at Erik Rintamaki’s rock collection under the white light of a 60-watt bulb or with sunlight streaming in the window, and you might nod politely. A lifelong rock picker, the Michigander has gathered a smattering of shapes, sizes, and colors. The rocks with rounded edges—many of them small enough to fit in your palm—tell long stories of ancient, grinding ice, and the relentless movement of waves and sand. Many are unassuming shades of gray, white, or pink. Mottled or flecked with black, the rocks are pretty, he says, like cousins of granite, and compelling reminders of the churn of time. But they probably won’t blow your mind, at least until you see them under ultraviolet light.

With a UV lamp in hand, they seem be laced with orange embers. Looking at them, it’s easy to imagine the sound of a crackling fire, or the pulse of gurgling magma. Under the right wavelengths, these ordinary-seeming rocks begin to blaze like the Eye of Sauron.

Rintamaki is a collector and seller who specializes in syenite rocks rich in the mineral sodalite (he dubbed them “Yooperlites,” a nod to his home, Michigan’s Upper Peninsula), which gives them their fluorescent secret. But these are hardly the only rocks that go bananas under UV light. “There are about 4,500 different types of minerals, and 500 or so show signs of fluorescence,” says James Holstein, collections manager of physical geology at the Field Museum in Chicago.

These minerals light up when so-called activator elements inside them are excited by high-energy UV light. “The atoms in that fluorescent mineral absorb some of that energy, but release the rest as lower-energy visible light, hence why the mineral appears to glow,” says Gabriela Farfan, curator of gems and minerals at the Smithsonian National Museum of Natural History. These activator elements, such as manganese, might be present in very small traces—sometimes on the scale of parts per million. Calcite, fluorite, and willemite are some of the minerals that do this. Under short-wave UV light, willemite looks like it is freckled with green slime. Calcite, on the other hand, might look screeching pink under short wavelengths and orange under longer ones.

Some rocks contain several types of fluorescent minerals, and still others also have minerals that phosphoresce—meaning that they can hold on to some of the fluorescent light energy and continue to shine for a little while even after the light source is removed. Aragonite is an example. “That’s a double-whammy,” Holstein says.

But there’s no reliable way to identify one of these glow-y rocks with the naked eye. “Unfortunately, most fluorescent minerals are not quite as charming when they are not under UV light,” Farfan says. There are some exceptions, though. Some diamonds are so fluorescent that they respond to the UV light from the sun, so they appear a little milky in plain daylight, Farfan adds. But for the most part, the rest lay low. Rintamaki says that people have been tromping over the rocks he calls Yooperlites for hundreds of years—without knowing their secret.

Certain geologic deposits are particularly famous for their fluorescent riches. The Sterling Hill Mine in New Jersey is one, Farfan says, and the Smithsonian has a display showing what its walls would look like under UV. But Rintamaki has found that Yooperlites turn up seemingly everywhere he looks. Rock hounds have found them on the shores of all five Great Lakes, for instance, and in Minnesota, Wisconsin, and Sault Ste. Marie, Ontario, on railroad beds, farm fields, gravel pits, driveways, and even the landscaped areas at McDonalds and Walmart. “Anywhere there’s rocks, I’ve found them,” Rintamaki says.

The key to spotting them, he says, is to look the right way. Rintamaki does his homework: He pokes around rocky beaches on Google Earth to get a lay of the land, and then visits in the daytime, to get a strong sense of the shoreline in mind, since the next time he’ll be there it will be really, truly dark. Then, he combs the beaches with a 365-nanometer UV flashlight, moving along the shore methodically, even ploddingly, and scans the ground in a grid. He grips the flashlight overhand and holds it by his shoulder, and then tilts the light down toward his feet, then out in front of him and back again. He moves the light six inches left or right and repeats the process, and then starts sweeping the light side to side. “Stopping and standing in one place is the best way to look,” he says. “If you’re walking, you’re going too fast.” Once he’s covered each patch of ground two or three times, he takes a couple steps and repeats the process. Then he turns and looks behind him, in case he has kicked up anything interesting as he moves along. (He plants driveway markers with glow sticks mounted on them in the sand so he can find his way back in the darkness.)

Back when he focused on agate, he says, he sometimes came back from collecting trips empty-handed. Now that he’s in the Yooperlite business, he adds, the tour groups he guides around the beach of Lake Superior seem to find things almost instantly. “People think you have to walk eight miles,” he says. “No. We might go 200 yards.”

Rintamaki believes it’s possible to find Yooperlites anywhere there’s glacial till—a patch of woods, your yard, a local strip mall. “No matter where you live,” he says, “go get a light and look.”

A light show, courtesy of a historic New Jersey mine.
abandoned

The free how-to dispels myths and minimizes the hazards of hunting and hoarding these special specimens.
tunnels

When Ruggles Mine went up for auction, mineral collectors feared it would never reopen to the public. After a last-minute reprieve, its future is still uncertain.
plaques