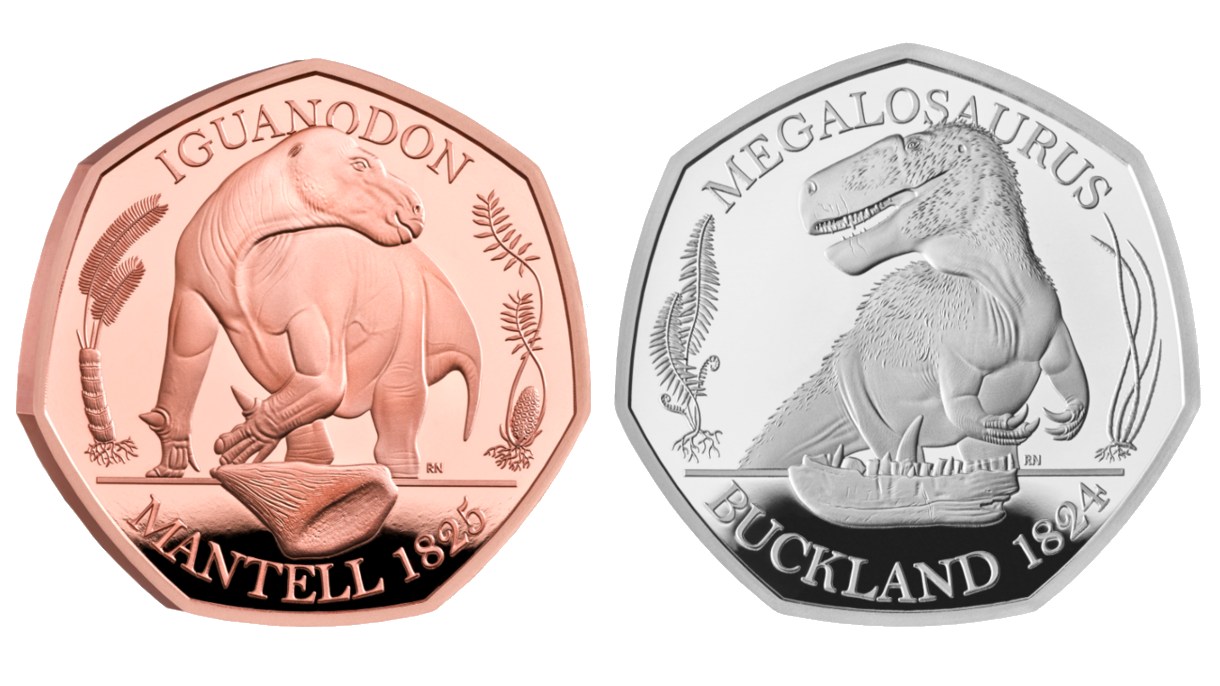 The Royal Mint coins—available in bronze, silver, and gold—are a testament to English paleontology. Courtesy Royal Mint of the United Kingdom
In This Story
Destination Guide

England is famous for its rich archaeology, a result of the island nation’s long-standing habitation and record-keeping. But deep below the Victorian, Georgian, Anglo-Saxon, and Roman strata of Albion, the paleontological record speaks to a time long before any simian stepped foot in the region.

Now, the legacy of the country’s extinct proto lizards will be commemorated by the Royal Mint, on coins depicting three dinosaurs.

“There’s a lot of pressure involved, because this is a big deal,” says Paul Barrett, a paleontologist at London’s Natural History Museum and an adviser to the mint on its new coins. “[T]hey’re producing coins, and these are things that can’t just be changed. They’re real things, made of metal. You can’t just put an eraser to them if something’s wrong.”

Millions of years before there was such a thing as “England,” the site was an archipelago surrounded by a shallow tropical sea—a haven for dinosaurs of all shapes and sizes (mainly large). In the early 19th century, a bit of paleontological mania consumed the Brits, from Mary Anning on the Dorset coast to Gideon Mantell in Oxfordshire and Sussex. Mantell’s crowning achievements are two of the dinos included in the mint’s project, over 150 years after the paleontologist-cum-physician-cum-geologist’s death.

The first dinosaurs coined in the U.K. are the first that were found in the British soil: the meat-eating megalosaurus, which thrived in the middle Jurassic period, and a pair of extinct animals that lived 10 million later—the spiky-thumbed iguanodon and the armor-plated hylaeosaurus.

Each coin features paleoart of the dinosaurs—created through extensive conversations among paleontologists, paleoartists, and the mint—plus the names of the people who named each species and images of the original fossils they found.

Iguanodon is well-documented in the fossil record, and hylaeosaurus doesn’t offer much room for controversy. But recent work on megalosaurus suggests that the dinosaur may have actually had feathers. Barnett and the paleoartist Bob Nicholls decided to give the giant therapod a hint of feathers—enough to split the difference between two schools of thought.

“We brought it up to date by giving it some feathers,” says Barrett. “But by the same token, we didn’t want to go too far and make it look like some kind of diabolical turkey.”

The paleoart on the coins is a marked improvement over what was achievable in the past, Barrett says. The niche field, which dates back only to the 1980s, has grown apace in the past few decades because “the science moves all the time. If we did this 30 years ago, the dinosaurs would look very different than how they look now.”

But—obviously—it can only be as up to date as paleontology itself. It’s a far cry from what early British excavators could think up, especially with a limited understanding of dinosaur anatomy. Back then, in the 1820s, even the vocabulary to call the creatures “dinosaurs” was lacking.

“Instead of looking like giant lizards or giant crocodiles, [early paleoart] looked like the nightmarish outcome of a one-night stand between an elephant and a lizard,” says Barrett.

The coins, now available on the Royal Mint’s website, are 50 pence pieces, with prices ranging from 10 pounds to nearly 1,000. If the metal-minted mega-lizards are a bit out of your price range, well, shovels cost about the same as the cheaper coins—which might help you find a fossil for yourself.

The third episode of TED’s Pindrop podcast was 66 million years in the making.
dinosaurs

Of course, they are deep underground and came from 75-ton titanosaurs.
dinosaurs

Found: Possible Traces of DNA, in a Fossilized Dino Skull

This ancient hadrosaur has some microscopic secrets.
dinosaurs

A 14-stop bar tour through Great Britain's past.
Related

Nothing adds prehistoric flair to a decorating scheme quite like a moving T. rex.
Read more
Thanks for sharing!