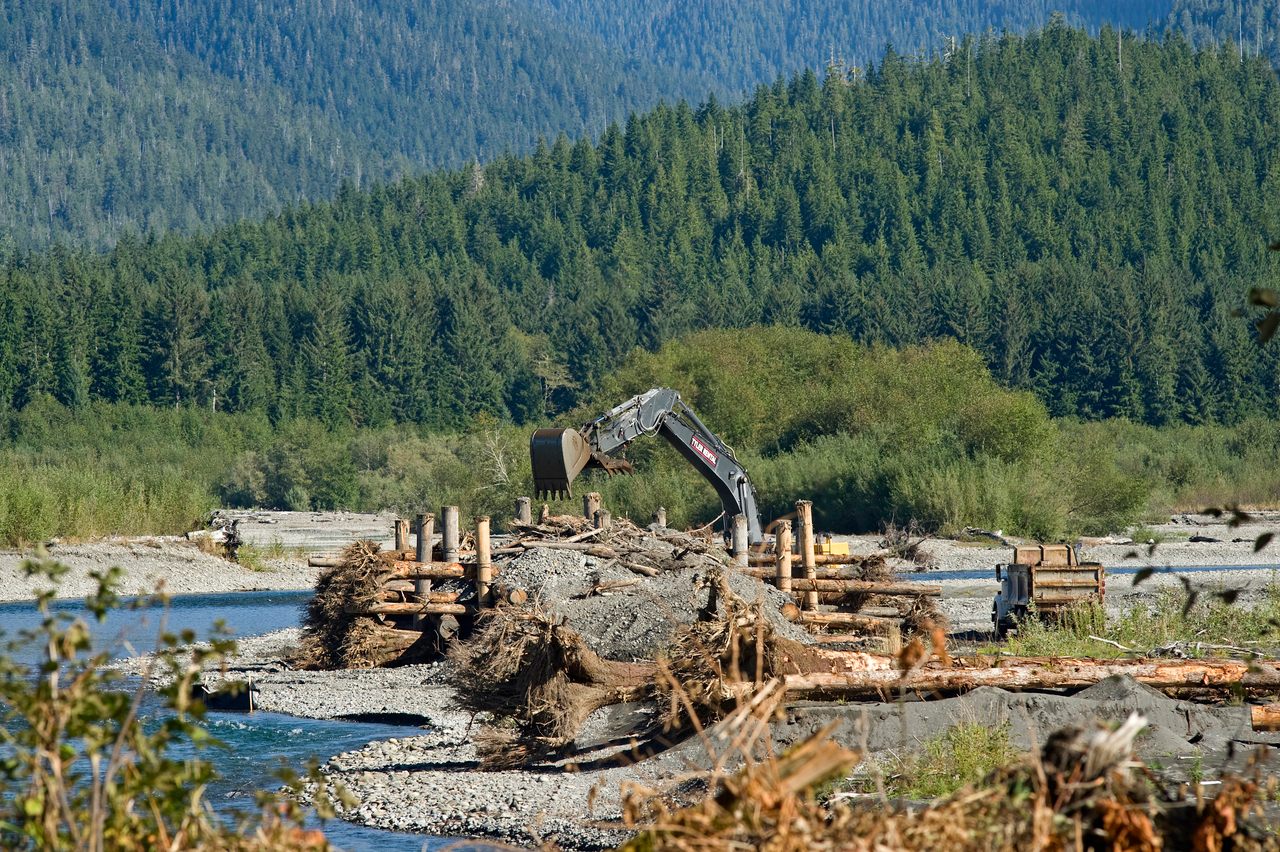 Cavin Park was working for the Quinault Indian Reservation’s invasive plant crew when he watched a towering crane stack logs 100 feet across the bed of the Upper Quinault River. Pile drivers 70-feet high stood against the backdrop of the foggy, spruce-filled woods that give Washington’s Pacific coast its spirit of mysterious beauty. The purpose of the construction project was to mimic nature: The workers formed log jams meant to restore the River’s ecosystem and its depleted blueback salmon population.

Park, who is now a Forestry Practices Technician for the Quinault Nation, grew up on the Reservation. His mother worked at the tribal Cook Creek Fish Hatchery, which was built to make up for the decline of local, wild salmon, and his father owned a logging company. Park’s current work is a synthesis of his parents’, and he explains that his work can be summarized simply by two words: salmon and trees.

Salmon has been a staple of the Quinault traditional diet and tribal culture for thousands of years. And in contrast to the many Native American tribes forced off their land by Europeans and Americans, the Quinault’s aboriginal land, which extends from the Pacific Coast to the Olympic Mountains, was officially designated as a Reservation by the United States when the Quinault and Quileute tribes signed the Treaty of Olympia in 1855. Salmon fishing continued unabated, and like most Quinault families, Park grew up eating a lot of salmon. “I’ll take fresh-baked salmon over a fresh-baked cake any day,” he says, only half joking.

But Park isn’t eating a lot of salmon these days. And neither are most tribal members living on the Reservation.

“Some have opted not to have salmon as often, especially Blueback, even for cultural or spiritual events,” Park explains. “The numbers have dropped so low that we’re trying to preserve them in any way, shape, or form.”

“We have a few remaining [family] members that are fishermen, but it’s just so hard to rely on nowadays,” he says. “We’re finding that the fish aren’t returning to the Quinault River.”

Blueback salmon, also called Quinault sockeye, are uniquely adapted to the Quinault River System. They require rivers, lakes, and oceans to complete their life cycle, and the Quinault Reservation happens to house a habitat perfect for the Blueback: They hatch in the Upper Quinault River, which flows into Lake Quinault, where they rear for one to three years before swimming downriver to the Pacific Ocean and growing to full size.

It is after the adults’ return trip upriver, to spawn, that Quinault fishermen catch them by casting large nets across the water. Those that escape their nets typically die in the river, where their carcasses provide nitrogen and phosphorus for the ecosystem. Trees near bodies of water have been found to contain nitrogen linked to decayed salmon.

Those trees, in turn, provide a crucial part of the salmon ecosystem, says Park: winding waterways. For generations, fallen logs and woody debris piled up in the Quinault River, forming islands called log jams that provided havens from fast-moving water where salmon spawned and young fish could rest and grow. The disappearance of the Blueback is directly linked to the loss of log jams.

“My grandfather told me from oral histories and his elders [that] they could walk across the river and not get wet, the fish were so plentiful,” says Pope. “But it’s definitely not like that anymore.”

When American settlers migrated up the Pacific Coast, they were intent on turning the Quinault Valley into farmland (and the Quinault tribal members into farmers). They cleared much of the woods and debris in and around the Quinault River for logging and to convert the area into agricultural land. By the early 1900s, the lumber industry was responsible for half of the area’s economic activity. Log jams disappeared and the River started moving faster. Today, it’s swollen by floodwaters that hurry salmon past safe havens where log jams should be..

In the 1950s, says Larry Gilberson, Senior Scientist with the Quinault Department of Fisheries, the impact on salmon populations reached a tipping point. From an estimated average of 250,000, the size of each year’s run decreased to just 20,000 Blueback salmon since 2005.

In response to the emergency, the nation formed the The Quinault Indian Nation Salmon Habitat Restoration Initiative to save the Blueback fisheries. The creation of engineered log jams is one of their biggest projects. A pilot project began in 2008, and every two years since, the Initiative has added additional log jams, using large cranes and pile drivers to place the logs every summer when the water is low.

While it is too soon to measure the effects of the engineered log jams, fisheries staff have witnessed salmon utilizing the habitat again. “The rivers are starting to wander a little bit more and their shape is already starting to change,” Park says.

While the Blueback fishery depletion might seem like a far-off issue for those not living nearby, Tyson Johnston, the Vice President of the Quinault Nation, sees it as a global crisis. A collapse of salmon fisheries in Pacific Northwest would impact not only the Quinault Nation and other coastal tribes, but communities that depend upon the fisheries in places such as Alaska, Canada, and California.

“Whether you live here or in a metropolis like Seattle or Portland,” says Johnston, “we all should be thinking about that web of life and how we all play a part in it.”

Conservationists should look to Indigenous history to fix the future.
food

In Southern California, the popularity of white sage threatens its survival.
Video