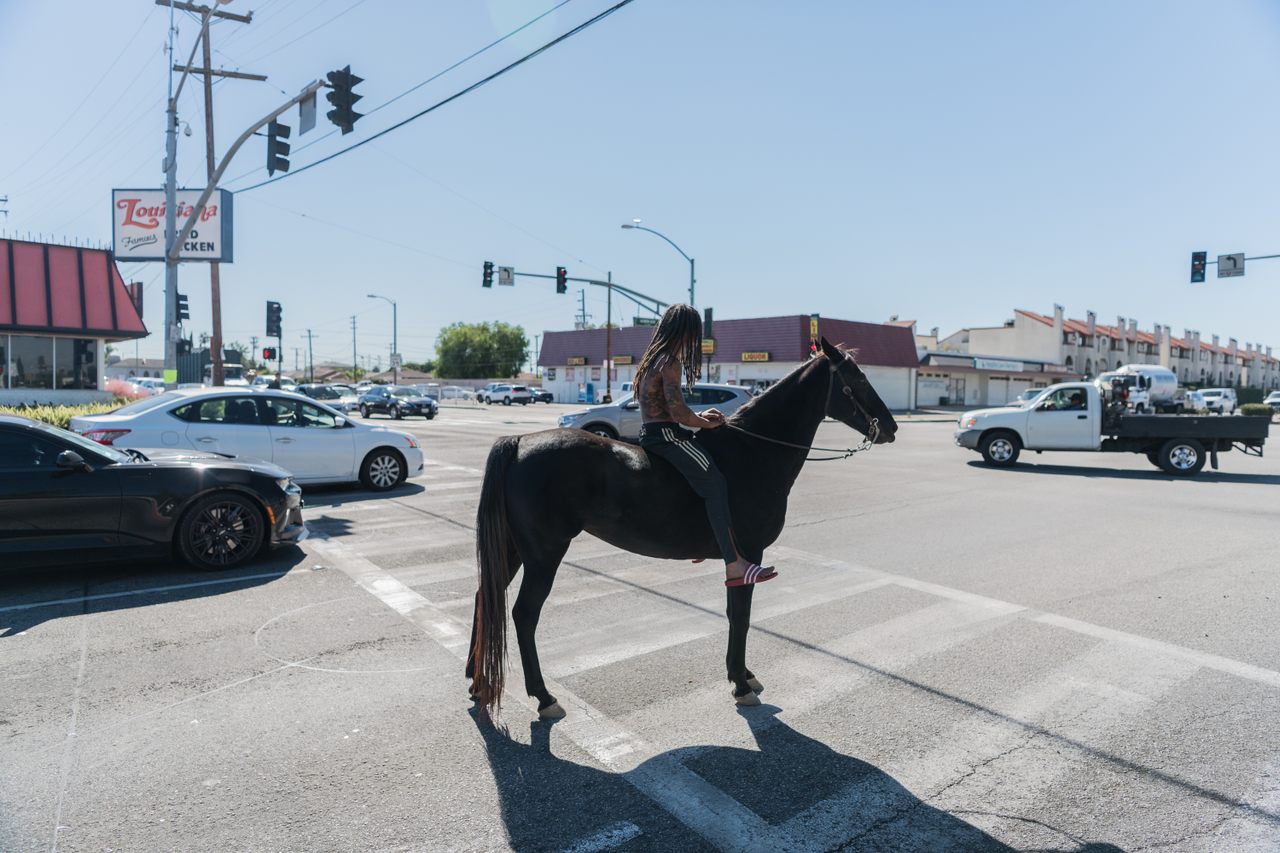 Kenneth Atkins and his horse Ebony wait for the light to turn green at the intersection of Wilmington Avenue and Alondra Boulevard, All photos by Walter Thompson-Hernández

Richland Farms, a zoned agricultural area in the city of Compton, south of Los Angeles, has long fostered a vibrant equestrian community. In 1988, Mayisha Akbar created a horseback riding club for local Black youth to keep them away from gangs and violence. As members grew up, many kept riding, continuing a long and rich history of Black cowboys in the American West. Today, a close-knit group known as the Compton Cowboys celebrate this legacy on the very same ranch Akbar developed. Their motto: “Streets raised us. Horses saved us.”

Journalist Walter Thompson-Hernández grew up in nearby Huntington Park. On weekend drives to Compton, he would see Black riders on the streets and along train tracks. Years later, as a journalist, he embedded with them for a year and a half. His reporting became the remarkable book The Compton Cowboys: The New Generation of Cowboys in America’s Urban Heartland, published by HarperCollins in April. Thompson-Hernández tells the stories of 10 Black cowboys—from Charles Harris, a rider who opts for Air Jordans and a Yankees baseball cap, to Keiara Wade, the only woman in the group who has been riding since she was a toddler.

A central figure in the book is Mayisha’s nephew, Randy Hook, who dreams of developing a sustainable business model that can inspire the creation of similar ranches elsewhere. “We’re connected to Black cowboys in Philadelphia, cowboys in Chicago, and also with cowboys overseas,” he says at his aunt’s retirement party, which Thompson-Hernández attended. “We just need the resources to do this in a big way and put ranches like this one in inner-city environments where there’s a lack of nature, because we see that this model works.” These horses, he added, “changed us, and we think they can have the same effect on at-risk youth everywhere.”

Atlas Obscura spoke with Thompson-Hernández about the enduring role of Black cowboys in Compton and the future of this multigenerational riding culture.

When did you first find out about Black cowboys in Compton?

I was six. It was a Sunday afternoon, and my mom and I were driving down Alameda Street heading towards the Compton Swap Meet. I saw these two Black men on horses. It was the first time I saw Black folks on horses. It was jarring. I didn’t really learn about Black cowboys in school, and it was the moment when I realized that there are a lot of different sides to history. The history I was learning in school wasn’t the only factual story.

It was something I never forgot about. As a child, I was in complete awe of the cowboys and how cool and beautiful they looked. As an adult, I came to realize that the horses act as a shield and even armor.

The Richland Farms property is clearly more than just a ranch.

It’s a place where the cowboys and community residents can go to feel free. There’s a lot of dangers outside—police violence, gangs—but inside the ranch, it feels like a sanctuary. People can ride horses and be at peace in a way that it doesn’t happen outside. More than anything, it serves as a therapeutic center. Studies have shown that equine therapy has an incredibly positive impact on people who have experienced trauma and stress.

The Compton Cowboys made headlines last month when they rode at a Black Lives Matter protest. What was the significance of their presence?

Their presence was incredibly powerful. So many demonstrators had been used to seeing white guys on horses, mounted police officers. Black men and women on horses was a political statement that inspired fellow demonstrators.

I think this year has really galvanized the cowboys to organize peace rides in Compton, to really speak out against what’s going on in the world. It’s evident that we’re in this important civil rights movement, and I think the cowboys are leading the charge for racial justice.

Urban cowboy communities exist in cities around the United States, from Los Angeles to Philly to Baltimore, and their visibility is increasing. What is the future of the Black cowboy tradition?

I think we are in somewhat of a Black cowboy renaissance. I also think that every 10 years or so we are moved by the images of black men on horses in Hollywood and popular culture. I think the future of Black cowboys rests on the experiences of the younger generation. The Compton Cowboys, for example, are deeply committed to preserving the legacy of Black cowboys in the city. Their biggest fear is that they will be the last generation of Compton’s cowboys. I think other cowboys around the United States feel the same.

What are some of the other challenges the ranch in Compton faces?

I think the biggest deterrent is finding the money to keep the ranch alive. It’s a really precarious situation. It’s really hard to come up with almost $20,000 a month to keep it running. The youth program was thriving before the pandemic, and it was suspended as it’s been difficult to find resources.

What do you hope readers will take away from your book and photographs?

Do These Tubes Hold the Oldest Known Stereo Recordings?

The self-taught naturalist found a site that would transform scientific views about Native Americans in North America.
bars

You could own the busiest watering hole for miles.
world record

It's a major turnaround from the longhorn's close call with extinction a century ago.
wild west

The Forgotten Trans History of the Wild West

It was a frontier in more ways than one.
Video